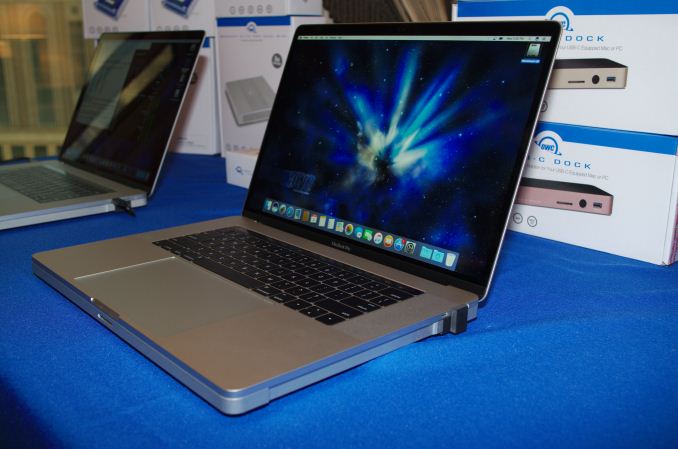 At CES, Mac accessory and upgrade supplier Other World Computing (OWC) showcased prototypes of an upcoming add-on for Apple's latest MacBook Pro models. The OWC DEC is in many ways similar to their existing line of USB and Thunderbolt docks, with one big difference: the DEC is intended to travel around with the computer instead of staying at the desk.

OWC has been working on the idea of the DEC for several years, but the latest generation of the MacBook Pro has made the DEC a priority. The DEC will provide many expansion options that have been removed from the MacBook Pro line over the years, at the expense of making the machine heavier and thicker—but no worse than what the MacBook Pro itself was several years ago. The exact configuration of ports has not been finalized, but at a minimum the DEC will provide USB type A ports, gigabit Ethernet and a SD card reader.

The DEC will also offer internal storage expandability by accommodating 2.5" drives and potentially M.2 SATA SSDs. OWC is also considering a version of the DEC that will use a Thunderbolt 3 connection to the host machine rather than USB, which would make M.2 PCIe storage possible but also make the DEC substantially more expensive. 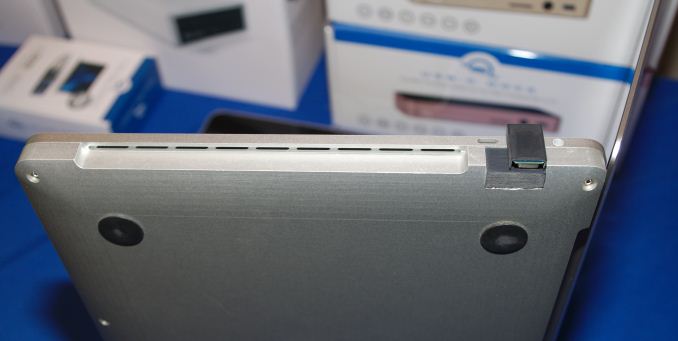 The fit and finish of the prototypes OWC had at CES was poor, but only because the prototypes were very early mock-ups. Despite the obvious tool marks on the bare aluminum and the use of a black plastic covering for the bridge connector, the DEC felt solid and showed attention to detail with recessed sides that don't block the speakers or vents and an overall shape that matches Apple's industrial design.

The first version of the DEC will be available this spring for the 2016 MacBook Pro with Touch Bar, both 13" and 15" models. OWC is also working on a model that will include an extra battery and deliver power to the host system through the USB-C connection. This model is expected to be available later in the year. Pricing has not been announced, but the base model will almost certainly be more expensive than OWC's existing USB-C docks that retail for about $150.