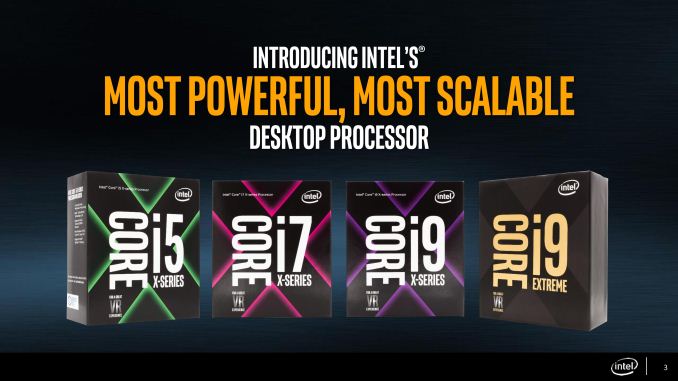 When Intel launched its new high-end desktop platform a few weeks ago, we were provided with Core-X CPUs from quad cores on the latest Kaby Lake microarchitecture, and 6/8/10 core parts on the Skylake-SP microarchitecture derived from the enterprise line and taking a different route to how the cache was structured over Skylake-S. At the time we were told that these latter parts would be joined by bigger SKUs all the way up to 18 cores, and up to $2000. Aside from core-counts and price, Intel was tight lipped on the CPU specifications until today.

The original Skylake-X processors up to 10 cores used Intel’s LCC silicon, one of the three silicon designs typically employed in the enterprise space, and the lowest core count. The other two silicon designs, HCC and XCC, have historically been reserved for server CPUs and big money – if you wanted all the cores, you had to pay for them. So the fact that Intel is introducing HCC silicon into the consumer desktop market is a change in strategy, which many analysts say is due to AMD’s decision to bring their 16-core silicon into the market.

Along with this, we have several release dates to mention.

On the specification side, the higher-end CPUs get a kick up in TDP to 165W to account for more cores and the frequency that these CPUs are running at. The top Core i9-7980XE SKU will have a base frequency of 2.6 GHz but a turbo of 4.2 GHz, and a Favored Core of 4.4 GHz. The turbo will be limited to 2 cores of load, however Intel has not listed the ‘all-core turbo’ frequencies which are often above the base frequencies, nor the AVX frequencies here. It will be interesting to see how much power the top SKU will draw.

One question over the launch of these SKUs was regarding how much they would impinge into Intel’s Xeon line of processors. We had already earmarked the Xeon Gold 6154/6150 as possible contenders for the high-end CPU, and taking the price out of the comparison, they can be quite evenly matched (the Xeons have a lower turbo, but higher base frequency). The Xeons also come with multi-socket support and more DRAM channels, at +60% the cost.

We fully expect the review embargoes to be on the launch dates for each CPU. Time to start ringing around to see if my sample was lost in the post.

Due to some sleuthing, PCGamer managed to obtain turbo frequencies based on per-core loading. I'm surprised Intel doesn't give this data out like candy when the products are announced, but we're glad to have it nonetheless.