The $80 Power Supply for Almost Everyone: The Corsair TX550M 80Plus Gold PSU Review

The TX550M is the least powerful model of the entire TX series. It is aesthetically simple and subtle, with the designer trying to find a balance between oversimplification and excessiveness. The chassis is sprayed with a satin black paint and decorative stickers cover the largest portion of its sides. These decorative stickers have the company logo and product model printed on them, and are placed in such a way that the sticker facing the right side of a case will always be upright, regardless whether the PSU has been installed with its cooling fan facing upwards or downwards. The sticker with the electrical specifications and certifications of the PSU can be found at the top side of the chassis. 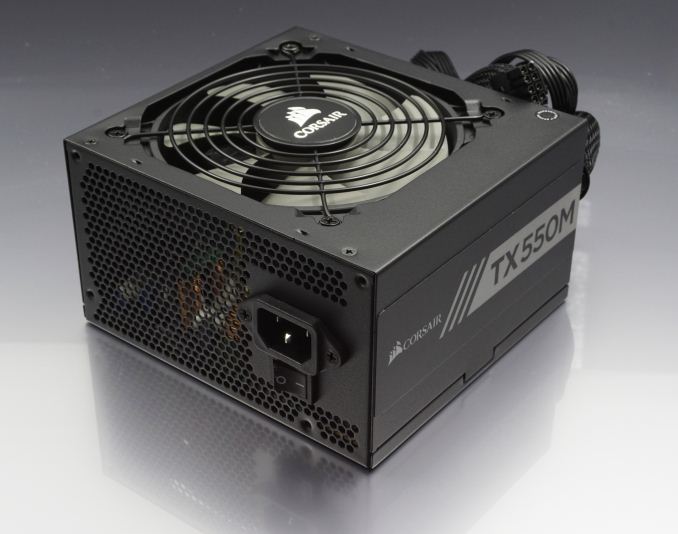 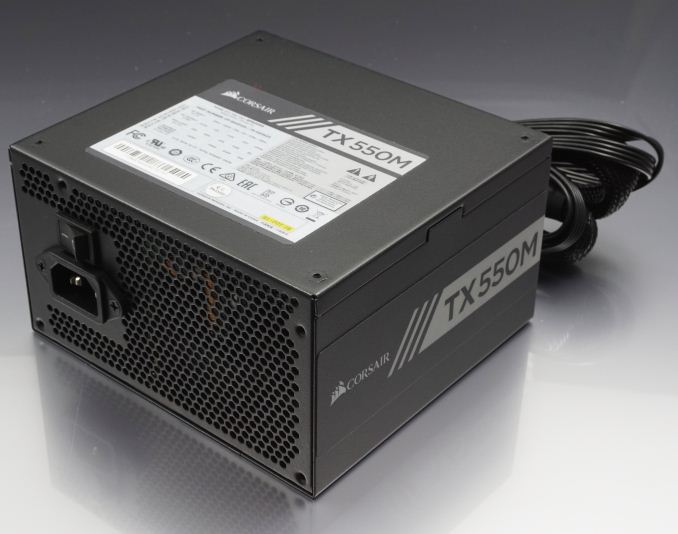 With a body that measures 150 × 86 × 140 mm (5.9 × 3.4 × 5.5 in), the TX550M adheres fully to the ATX design guide, making it compatible with any ATX-compliant case. The design holds no surprises. At the rear we can see the typical AC receptacle and a small on/off switch, while at the front we find the four connectors for the modular cables and the hardwired cables. There are four connectors, three for Molex/SATA cables and one for a CPU/PCIe cable. Note that only the PCIe cable with the two 6+2 pin connectors is included in the original bundle. Still, if the user wants to power a system that requires two 4+4 pin CPU cables but has no PCIe connectors at all, it is possible to do so with a TX550M. 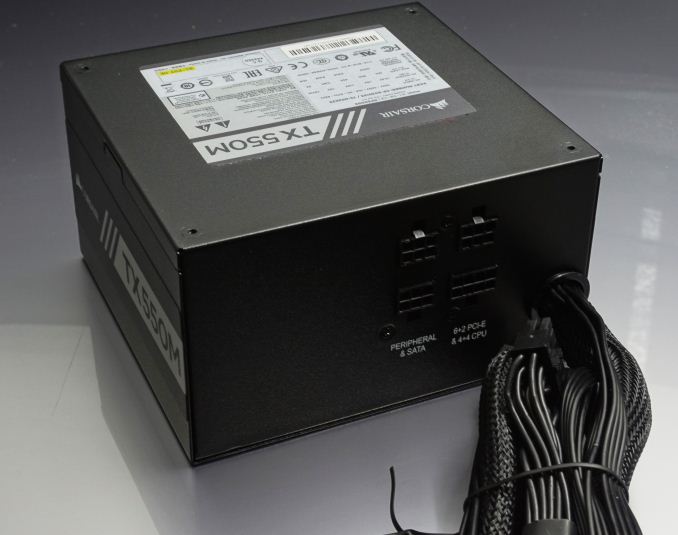 Due to its standard ATX chassis, the largest fan that Corsair could fit in the TX550M is a 120 mm NR120L. Corsair rebrands their fans and we cannot tell who the original manufacturer is but we can tell it has a rifle (advanced sleeve) bearing engine and a maximum speed of about 1500 RPM. The design of the blades suggests that it is a very high-pressure fan, which appears to be a strange selection for a PSU without excessively packed internals. 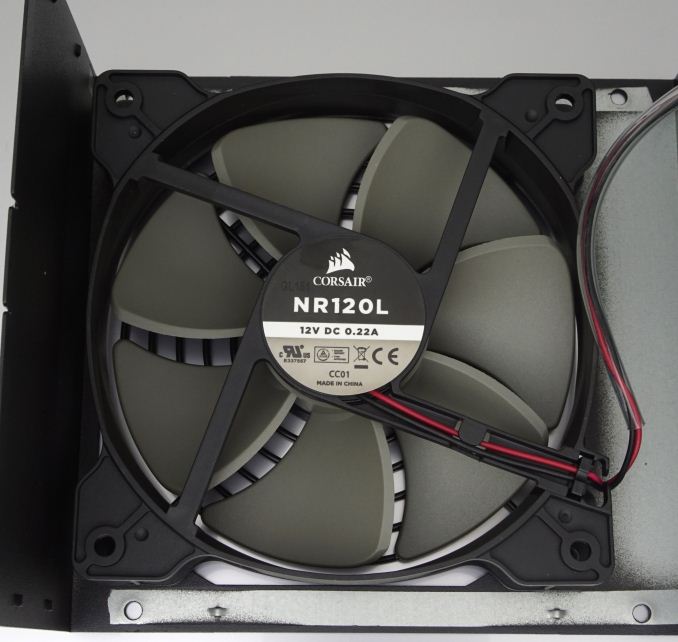 The OEM behind the creation of the TX550M is a Chinese OEM, Great Wall. We first encountered Great Wall’s designs when Corsair first implemented their platforms back in 2011. Great Wall is not a very popular OEM but they frequently cooperate with Corsair and their products were proven to be reliable. 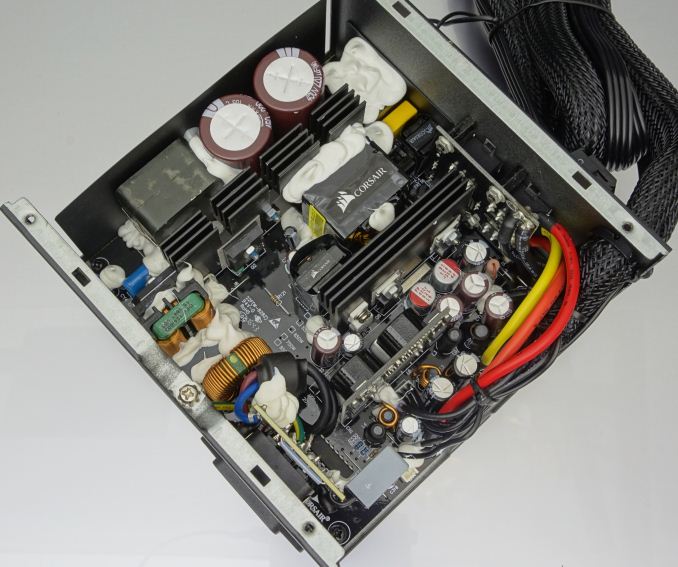 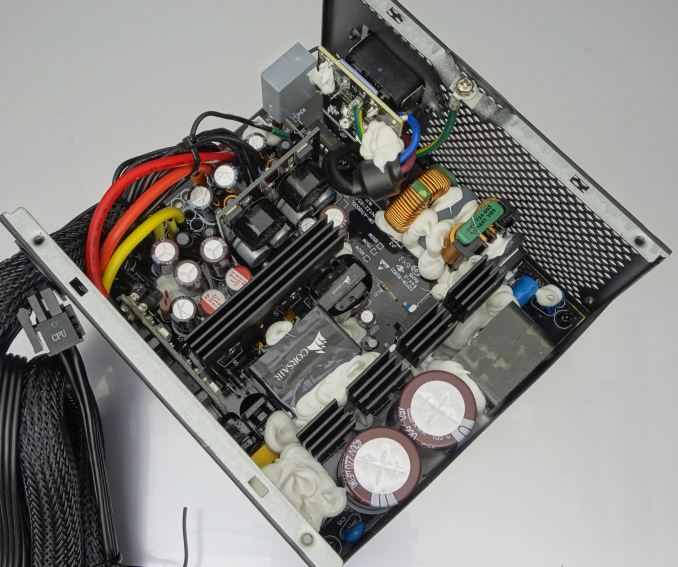 The filtering stage of the TX550M begins on a small PCB soldered at the back of the AC receptacle and continues onto the main PCB. We counted a total of four Y capacitors, two X capacitors and two filtering inductors, which are the standard for a quality PSU. There is one conversion bridge feeding the APFC circuitry. Surprisingly, the 550W unit has two APFC capacitors, each rated at 450V/220μF. Great Wall could easily replace these two small capacitors with an equally effective larger one. The APFC coil is shielded inside a plastic casing, most likely to prevent electromechanical noise (also known as “coil whine”). 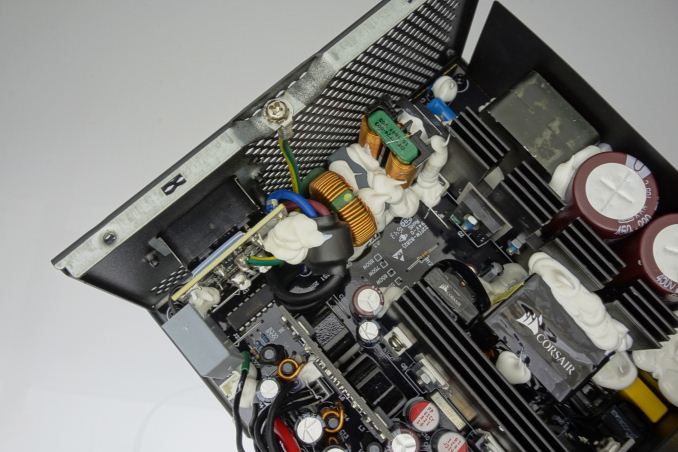 Generally speaking, the platform of the TX550M is technologically simple, based on circuitry designs that are being used into consumer PSUs for many years. Two MOSFETs form the simple half-bridge primary inversion circuitry and four MOSFETs generate the 12V line on the secondary side of the main transformer. The DC-to-DC converters found on the vertical PCB generate the minor 3.3V and 5V rails. It would seem that the PSU owes its 80Plus Gold efficiency rating to the use of highly efficient active components, as we have seen other units using the same base platform with minimal differences failing to reach such high efficiency standards. 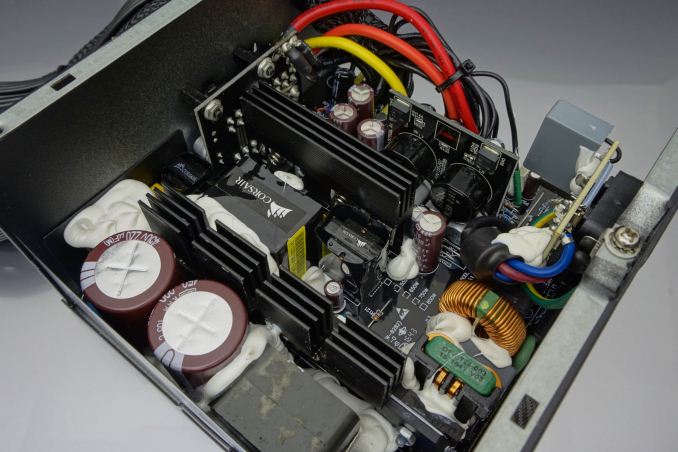 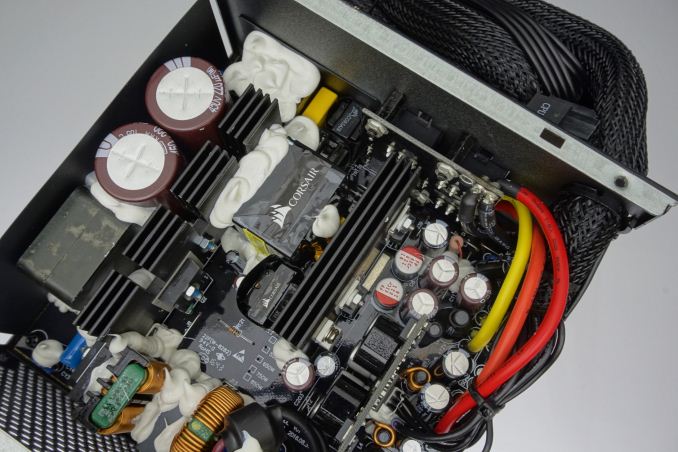