At Samsung's Tech Day event today in San Jose, the company shared their SSD roadmap for transitioning to 96-layer 3D NAND and introducing four bit per cell (QLC) NAND flash memory. Successors have been named for most of their current SSDs that use three bit per cell (TLC) NAND flash and are being updated with 96-layer 3D TLC, and new product lines using QLC NAND have been introduced.

Most of the updates to the TLC-based SSDs are fairly straightforward NAND upgrades that use existing SSD controllers. The PM981 client NVMe SSD and the 970 EVO retail counterpart that use 64-layer 3D TLC will be succeeded by the PM981a and 970 EVO Plus respectively. Capacity options remain the same, ranging from 250GB to 2TB. The most significant performance improvements are to sequential write speeds, but the PM981a also brings significant random I/O improvements that almost catch it up to the 970 EVO and 970 EVO Plus.

The PM983 datacenter SSD that uses the same Samsung Phoenix controller as the above client/consumer drives is being replaced by the PM983a. This update brings a doubling of capacities, now allowing for up to 16TB (presumably only on NF1 and U.2 form factors). In the datacenter, SLC write caches are not used so the advertised write speeds are significantly lower than for the client/consumer drives, but there are still significant improvements here.

The PM971a client NVMe BGA SSD is getting a significant update in the new PM991 that roughly doubles random I/O and sequential write performance and improves sequential reads by about 50%.

The enterprise SAS product line is not seeing any major changes to performance or available capacities, but the update from the PM1643 to the PM1643a does improve random write performance by about 20%. The largest model remains 30.72TB. 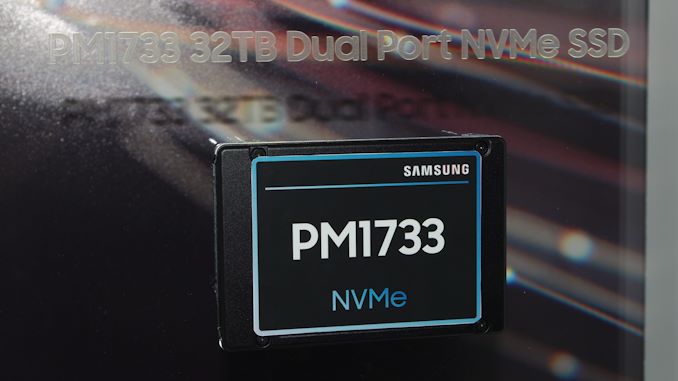 The high-end enterprise NVMe drives are getting a major controller update that brings PCIe 4.0 support in addition to the NAND upgrade. This allows for much higher performance across the board, most notably with sequential read speeds reaching 8GB/s on the new PM1733 compared to 3.5GB/s on the PM1723b. The maximum available capacity has caught up to the SAS product line with the introduction of a 30.72TB model. The PM1733 also introduces dual-port PCIe capability to this product line, providing a migration path for SAS SSD users who require this reliability feature.

Samsung's naming scheme for enterprise and OEM SSDs uses model names starting with SM for drives with MLC NAND, PM for TLC NAND, and now BM for QLC NAND. Four new QLC SSDs have been announced: the BM1733 and BM9A3 enterprise NVMe SSDs, the BM1653 enterprise SAS SSD, and the BM991 client NVMe SSD. All of these have obvious parallels with TLC-based PM-series models above, but Samsung has not yet shared detailed specifications for any of these QLC drives. Samsung also mentioned  the 860 QVO SATA and 980 QVO NVMe client drives. Since these names don't fit into Samsung's OEM SSD naming scheme, we assume these are upcoming retail products, but Samsung hasn't shared any release plans. 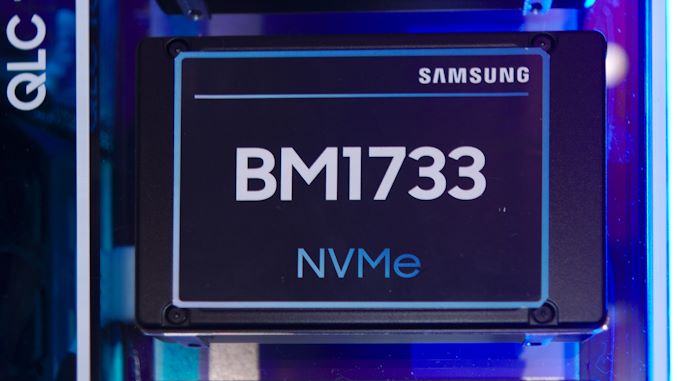 Without release schedules or detailed technical specifications, it's hard to assess the state of Samsung's QLC efforts, but the sheer number of models makes it clear that Samsung sees QLC NAND as a very important part of their storage portfolio going forward.

Samsung also mentioned that in Q2 2019 they are planning to introduce a higher-performing 512Gb QLC die to complement their current 1Tb die. Samsung compared the performance of this new 512Gb die against an unspecified competitor's 1Tb QLC, claiming that Samsung's high-performance QLC will have 37% lower read latency and 45% lower program latency. Their slides suggested that the performance differences relative to Samsung's own 1Tb part could be even larger, but Samsung did not quantify this. 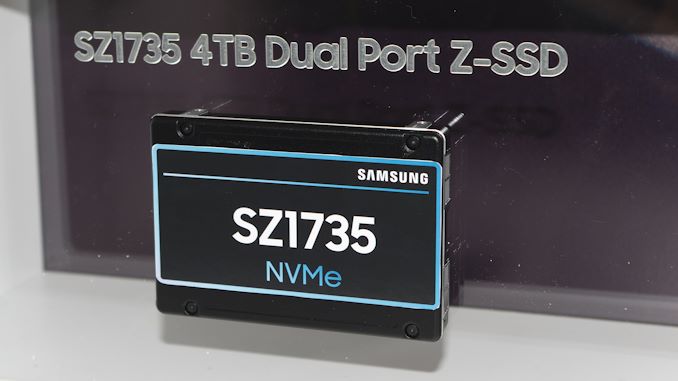 The first products featuring the second generation of Samsung's low-latency Z-NAND flash memory will be the SZ1733 and SZ1735, high-end enterprise NVMe SSDs that differ primarily in the amount of overprovisioning. Samsung has announced that their second generation of Z-NAND will include a MLC version, but these drives are using the SLC version. Like the TLC-based PM1733, the new Z-NAND SSDs will also feature dual-port capability and PCIe 4.0 support. Sequential reads of up to 12GB/s are claimed, but this product line is all about random I/O, which Samsung hasn't detailed yet. Samsung demoed a 4TB model, significantly larger than the 800GB maximum for the first-generation SZ985.