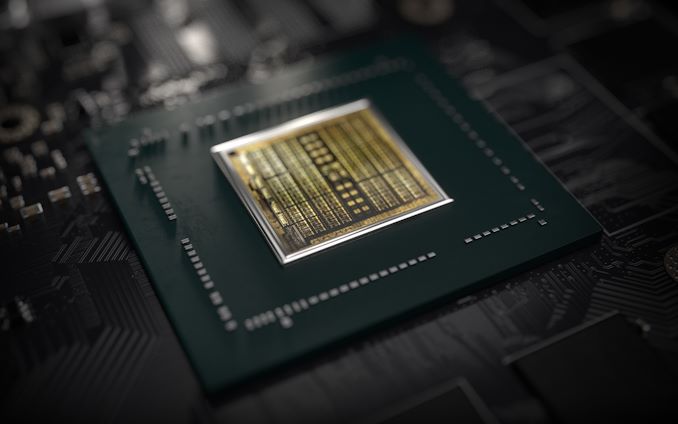 With this week marking the launch of AMD’s Ryzen Mobile 4000 APUs and Intel’s Comet Lake-H mobile CPUs, this week is essentially the kick-off point for the next generation of laptops. OEMs and vendors across the spectrum are gearing up to roll out new and updated laptops based on the latest silicon, as they set themselves up for the next year or so of laptop sales.

Not one to be left out, NVIDIA is also using this week’s launches to roll out some new laptop graphics adapters, which partners will be pairing with those new Ryzen and Core processors. The company is also unveiling a rather important set of additions to their laptop technology portfolio, introducing new features to better manage laptop TDP allocations, and for the first time, the ability to have G-Sync in an Optimus-enabled laptop. Overall while this week is primarily focused on AMD and Intel, NVIDIA is making sure that they are giving partners (and consumers) something new for this generation of laptops. 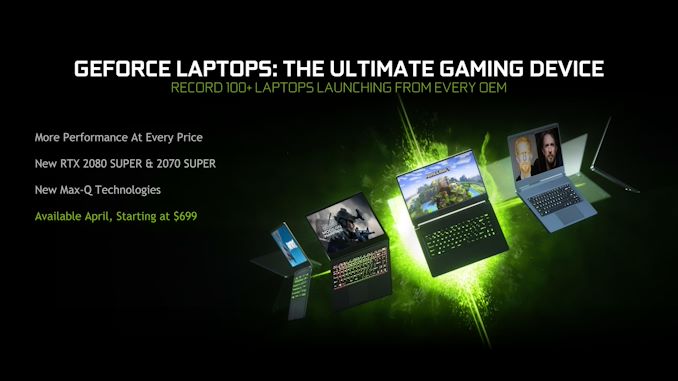 First and foremost, NVIDIA is launching two new mobile graphics adapters this morning. The GeForce RTX 2080 Super and RTX 2070 Super, both of which were launched on the desktop last summer, are now coming to laptops. Like their desktop counterparts, the new adapters are based on NVIDIA’s existing TU104 silicon, so there aren’t any new GPUs to speak of today, but their launch gives OEMs additional options for dGPUs for their high-end gaming laptops.

As has been the case for NVIDIA throughout this generation, while the company doesn’t have distinct, mobile-labeled SKUs, the new laptop parts do have their own set of specifications. Specifically, while the mobile parts have the same CUDA core counts and memory support as their desktop brethren, they have different clockspeed and TDP profiles, owing to the limitations of the laptop form factor. All told, the new Super parts are designed for 80W+ laptops, with the flagship RTX 2080 Super approved for 150W (or more) designs, as vendors get the option to push the adapter just about as hard as they think they can get away with in the luggable desktops we commonly see in the broader market for ultra high powered laptops.

Otherwise, these are fairly typical GeForce RTX SKUs. Boost clocks will range from 1080MHz to 1560MHz, depending on what laptop vendors opt for in terms of power and performance. The RTX 2080 Super will have a fully-enabled, 3072 CUDA core TU104 GPU, while the RTX 2070 Super gets a 2560 core version of the same GPU.

Meanwhile, memory is the only other notable change here: while both adapters come with 8GB of GDDR6 memory, unlike the desktop RTX 2080 Super, the mobile version won’t come with 15.5Gbps GDDR6. Instead, it ships with 14Gbps memory like the rest of the RTX lineup. Overclocked VRAM is rather expensive in terms of power, so it’s not too surprising to see NVIDIA drop it here.

NVIDIA is also using this opportunity to roll out some smaller hardware updates to its laptop portfolio. On the memory front once more, the company has confirmed for the first time that it has been working with memory vendors on low voltage GDDR6 memory. Unfortunately the details here are slim – it’s not clear whether the low voltage RAM NVIDIA is using is any different than the 1.25v GDDR6 already offered by memory suppliers – but even 1.25v would be a notable decrease over normal 1.35v memory. NVIDIA pegs VRAM memory consumption at around 20 to 25 watts for their laptop solutions, so being able to shave off even 10% of that is a couple more watts that can be shifted over to the GPU itself for more performance.

And keeping with the power efficiency theme, NVIDIA tells us that they’ve also been working with partners to get better VRMs in laptops. This is another area where details are quite slim, but VRMs have been an ongoing focus area for the company. Voltage regulation is a game of efficiency – any power you lose is waste heat that eats into a laptop’s thermal budget – so the goal is always to maximize efficiency. Coupled with NVIDIA’s new Dynamic Boost technology, the need for more efficient VRMs (particularly high wattage solutions) is at an all-time high.

Alongside their new high-end hardware, NVIDIA is also launching a pair of new low-end SKUs for the mobile space. These are the GeForce GTX 1650 Ti, and a GDDR6 version of the GTX 1650.

The GTX 1650 Ti is a particularly interesting matter, as it has no desktop counterpart. Up until now, NVIDIA has been launching desktop parts first, and then having laptop parts launch in-concert with the desktop parts, or at a later time entirely. But for the GTX 1650 Ti, we have a purely mobile part, at least for the time being.

The hardware itself shouldn’t be too much of a surprise. Here NVIDIA is reusing its TU117 GPU, which is the same GPU that powered the original mobile GTX 1650. The big change here is that the Ti SKU gets much better definition: whereas the regular GTX 1650 has “up to” 1024 CUDA cores and comes with a couple of different memory types, the GTX 1650 Ti is guaranteed to have 1024 CUDA cores as well as GDDR6 memory. Coupled with a slightly higher maximum TDP of 55W, and it should deliver better performance. Though it’s still going to leave a noticeable gap between this fully-enabled TU117 part and the next part up in the stack, the TU116-based mobile GTX 1660 Ti.

Joining the GTX 1650 Ti will be another GTX 1650 SKU, the GTX 1650 with GDDR6. As alluded to in the name, this is a mobile GTX 1650 with GDDR6 memory instead of GDDR5. NVIDIA isn’t outlining any performance figures for the new part, so performance expectations will have to be left up to the reader’s imagination, but at otherwise equivalent specifications, this would be a 50% bump in memory bandwidth, from 8Gbps GDDR5 to 12Gbps GDD6.

However it’s going to be up to laptop vendors to decide what GTX 1650 configuration they’re using, as well as how to disclose it. The GDDR6 version isn’t getting its own canonical SKU name, so a laptop with it could have anything from an 896 core model with GDDR5 to a 1024 core model with GDDR6. Ultimately the minimum configuration hasn’t changed, but laptop OEMs now have another option for a slightly more powerful configuration. Or one could go with the GTX 1650 Ti and skip the uncertainty entirely.

With the addition of the new RTX 2080 Super, RTX 2070 Super, GTX 1650 Ti, and GTX 1650 (GDDR6) adapters to its portfolio, NVIDIA is using this week’s launch to rebalance the entire laptop product stack. As a result, some products are being discontinued, and others are being pushed down in price to fill spots previously covered by other parts. 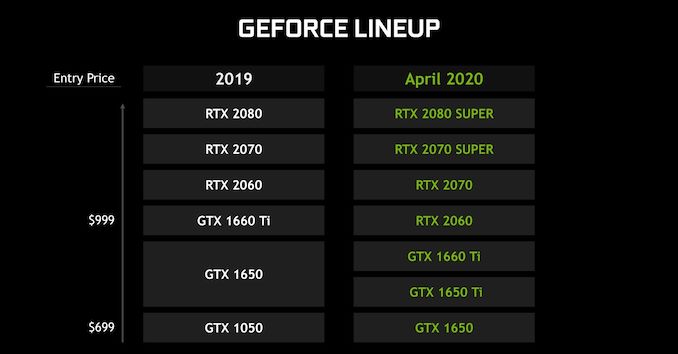 First and foremost, like the desktop realm, the regular RTX 2080 is now gone from laptops as well. With the RTX 2080 Super taking up the flagship spot – and not being massively different from the original RTX 2080 – NVIDIA has excised the original entirely. The RTX 2070 Super is instead NVIDIA’s second-tier adapter for laptops.

The RTX 2070, on the other hand, is still staying around. Instead, it’s getting pushed down the product stack to the third-tier position. NVIDIA now expects RTX 2070 to start showing up in laptops as cheap as $1199.

The RTX 2060 is also along for the ride. And this one is a particularly notable shift, as the RTX 2060 will now be NVIDIA’s anchor SKU for $999 laptops. This spot was previously held by the GTX 1660 Ti, and while NVIDIA does not explicitly discuss laptop part pricing, reading between the lines it’s clear that the company has cut laptop adapter prices to make this new product stack happen. So, as NVIDIA likes to promote, RTX laptops now start at $999. 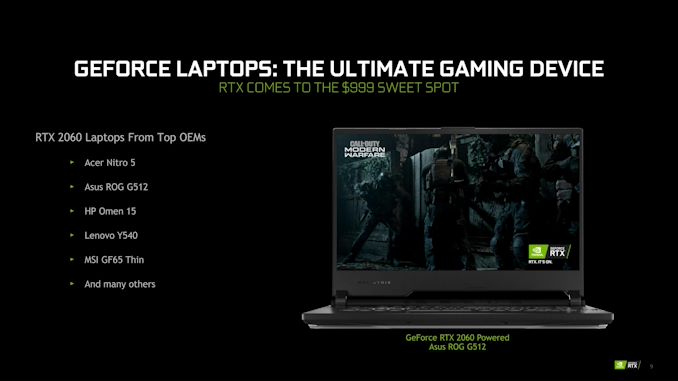 In fact of all the new mobile SKUs being launched today, the now lower-priced RTX 2060 is definitely getting the greatest focus from NVIDIA. The company’s OEM partners are announcing 5 new/updated laptops with the part, and the promise of more to come. As in the desktop space, NVIDIA is eager to dislodge its own legacy parts and entice gamers to upgrade to a laptop with a newer GeForce SKU, and while NVIDIA is certainly delivering the goods there, their case isn’t being helped by the relatively stagnant Intel. Thankfully AMD’s new Zen 2-based APUs have just launched, and while the market isn’t going to shift overnight, it gives the Green Team some new performance opportunities with the Black Team (or is that ex-Green Team?). 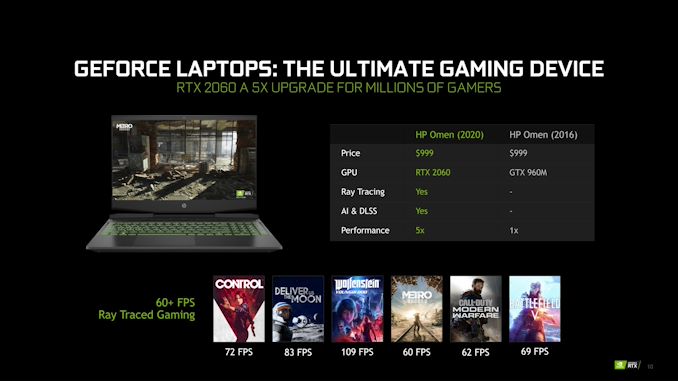 Finally, the new and updated GeForce GTX 1650 SKUs will be flushing out the low-end of the NVIDIA laptop product stack. The Pascal-based GTX 1050, the last GeForce GTX-branded holdover from the previous generation, is now on its way out. In its place, the GTX 1650 is being shifted down to take over. GTX 1650 laptops, in turn, will be hitting the market for as little as $699. In between that and the RTX 2060 will be the GTX 1660 Ti, as well as the new GTX 1650 Ti. And below $699 we’ll see the usual mismash of last-generation laptops, as well as NVIDIA’s entry-level, non-GTX laptop parts, the GeForce MX3xx series.

Wrapping things up, as with this week’s laptop CPU launches, laptops featuring the new and updated GeForce SKUs are set to hit the market shortly. While the ongoing coronavirus pandemic has thrown a spanner into exact release dates, AMD Ryzen Mobile 4000 laptops are already shipping. Meanwhile, Intel Comet Lake-S laptops should be shipping soon. Accordingly, we’re already seeing ASUS Ryzen laptops shipping with GeForce dGPUs, while Comet Lake-H laptops with the new parts should hit the market in a couple of weeks.