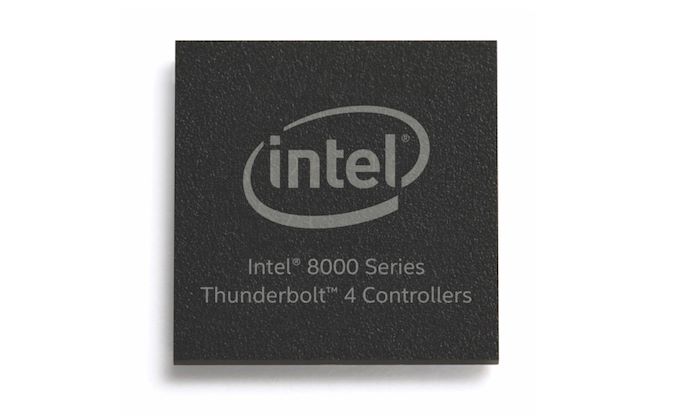 Following the launch of Thunderbolt 4 earlier this year as part of Intel's Tiger Lake CPUs, the next piece of the TB4 hardware stack has dropped this week with the release of Intel's first stand-alone Thunderbolt 4 controller, Maple Ridge (JHL8540). Previously announced back in July as part of Thunderbolt 4's reveal, Intel this week updated their Ark database to add a product page for the Maple Ridge controller family and flag that the first part is now shipping. With the release of the discrete Thunderbolt 4 controller, it will now be possible for hardware vendors to build TB4 hosts with additional ports, or in devices not using Intel's Tiger Lake Silicon.

This late-December launch follow's Intel's previous roadmap, which had the launch of standalone controllers set to take place before the end of 2020. These included the Goshen Ridge (JHL8440) device controller – for use in docks and peripherals, and the Maple Ridge (JHL8540 and JHL8340) host controllers – for use in computers, tablets, and other client devices. Goshen Ridge went into production soon after the announcement. And with the release of Maple Ridge Intel has also kept its promise here, getting it out just prior to the end of the year.

For quite some time, Thunderbolt ports were found only on systems with Intel processors. However, last year we saw vendors such as ASRock innovate with the introduction of a Thunderbolt 3 port on the X570 Phantom Gaming-ITX/TB3, an AMD Ryzen platform motherboard. This was followed a few months back by the introduction of M1-based Macs featuring Thunderbolt 3 (backed by Apple's in-house controllers). The use of Maple Ridge will now enable motherboard vendors to create systems with Thunderbolt 4 ports that do not necessarily need to be based on Intel processors.

The JHL8540 Maple Ridge controller interfaces with the host processor using a PCIe 3.0 x4 link and also takes in two Display Port 1.4a inputs. On the downstream side, the controller enables two Thunderbolt 4 ports, which along with their native Thunderbolt (packet encapsulation) abilities can also be used as straight-up USB4 ports, or as DisplayPorts via USB-C's DP alt mode. 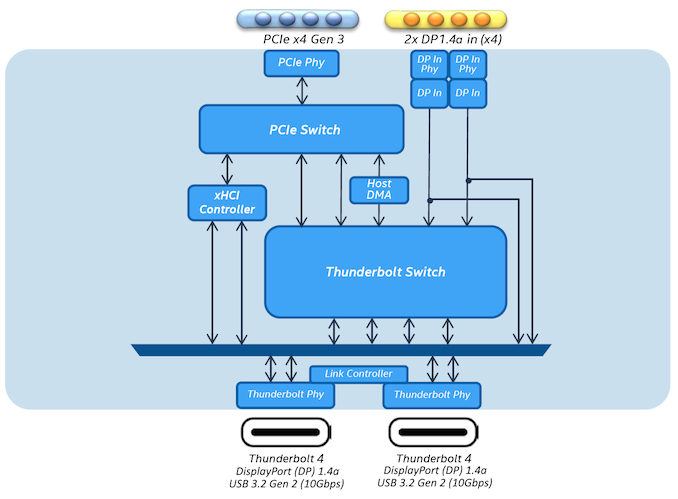 The PCIe switch and, in general, the PCIe support in Maple Ridge has been updated to work with many optional features, keeping security in mind and the rich variety of PCIe devices coming into the market. For example, Maple Ridge includes PCIe peer-to-peer support which allows two PCIe devices connected to the two Thunderbolt 4 ports to exchange data with each other without having to make it travel upstream to the host RAM. From a security viewpoint, Access Control Services (ACS) is also supported to provide isolation between different sets of PCIe devices and make them always go through the IOMMU. Precision Time Measurement (PTM) is also a supported feature, allowing different downstream PCIe devices to accurately synchronize with each other and the host system.

Intel has not published official pricing of the new Maple Ridge controller, however Mouser Electornics is listing the controllers for as cheap as $11.34 in bulk quantities. As for the availability of devices featuring the JHL8540, I suspect we're going to see them sooner than later. Intel's next-generation desktop platform, Rocket Lake-S, is not expected to have built-in support for Thunderbolt 4, as this feature was noticeably absent from Intel's Rocket Lake reveal back in October. So adding Thunderbolt 4 to Rocket Lake-S will likely require using Maple Ridge.

This would be consistent with other documentation from Intel, such as the Intel 500 series chipset guidelines, which apparently point to instructions to use a discrete USB4-compliant Intel Thunderbolt 4 controller connecting to four PCIe 3.0 lanes from the chipset for USB4/Thunderbolt 4 support. To that end, we expect that the development of actual hardware by Intel’s partners using the Maple Ridge controller should be well under way by now.