Russian outlet Vedomosti.ru today is reporting that the conglomerate Rostec, a Russian state-backed corporation specializing in investment in technology, has penned a deal with server company Yadro and silicon design company Syntacore to develop RISC-V processors for computers, laptops, and servers. Initial reports are suggesting that Syntacore will develop a powerful enough RISC-V design to power government and education systems by 2025.

The cost of the project is reported to be around 30 billion rubles ($400m), with that the organizers of the project plan to sell 60,000 systems based around new processors containing RISC-V cores as the main processing cores. The reports state that the goal is to build an 8-core processor, running at 2 GHz, using a 12-nanometer process, which presumably means GlobalFoundries but at this point it is unclear. Out of the project funding, two-thirds will be provided by ‘anchor customers’ (such as Rostec and subsidiaries), while the final third will come from the federal budget. The systems these processors will go into will operate initially at Russia’s Ministry of Education and Science, as well as the Ministry of Health.

Syntacore already develops its own core with the RISC-V architecture, rather than licensing a design. There have been questions as to whether any current RISC-V design is powerful enough to be used in a day-to-day work machine suitable for administrative services, however with the recent news that Canonical is enabling Ubuntu/Linux on some of SiFive’s RISC-V designs, chances are that by 2025 there will be a sufficient number of software options to choose from should the Russian processor adhere to any specifications required. That being said, it is not uncommon for non-standard processors in places like Russia or China to use older customized forks of Linux to suit the needs of the businesses using the hardware. Syntacore's documentation states that their highest performance 64-bit core already supports Linux. 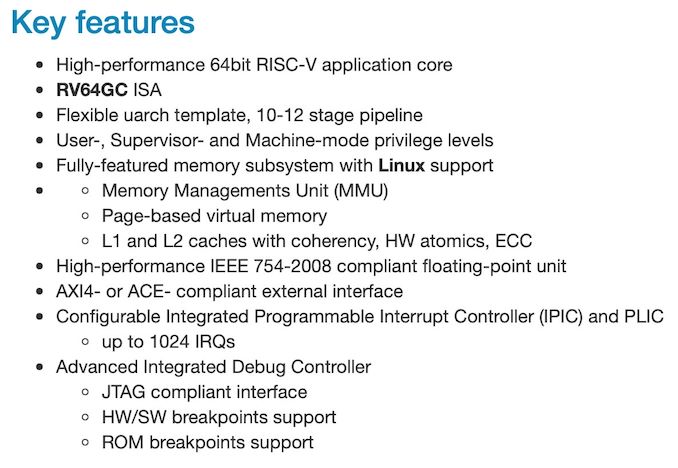 This news is an interesting development given that Russia has multiple home-grown CPU prospects in the works already, such as the Elbrus 2000 family of processors that run a custom VLIW instruction set with binary translation for Intel x86 and x86-64; these processors already offer 8-core and multi-socket systems running on Linux. Development on Elbrus is still ongoing with Rostec in the mix, and the project seems focused on high-powered implementations in desktop to server use. In contrast, the new RISC-V development seems to be targeting low-powered implementations for desktop and laptop use. Russia also has Baikal processors using the MIPS32 ISA, built by a Russian supercomputer company.

It will be interesting to see how this story develops: $400m should be sufficient to build a processor and instruct system design at this level, which puts the question on how well the project will execute.