China's SMIC To Build a GigaFab for $8.87B: An Answer to the Shortages

As a result of being on the US Entity list, SMIC's blacklisting has caused troubles in the company developing and deploying leading-edge fabrication technologies. As a result, it has been forced to focus on mature nodes, which still have plenty of use in long-life cycle parts for electronics and the automotive industry. On Friday the company announced plans to build China's first GigaFab, a 300 mm production facility with planned capacity of around 100,000 wafer starts per month (WSPM). The fab will cost nearly $8.87 billion.

Building Up Capacity for Mature Nodes

The new fab will be located near Shanghai, in the Lingang Free Trade Zone (FTZ), and will be built as a partnership between SMIC and the Shanghai Municipal People’s Government. The fab will process 300 mm wafers using mature production technologies, such as 28 nm and above. These nodes are typically used for various chips with a very long lifecycle, and which are in short supply now. Over the past few months various leading PC makers complained about deficit of cheap components like display driver ICs (DDICs) or Wi-Fi controllers and these chips are made using 28 nm and larger nodes. Other industries, such as the automotive industry, have been crying out for new supplies - given China's rather large car market, there is pent up demand for more sources of fundamental electronic components. 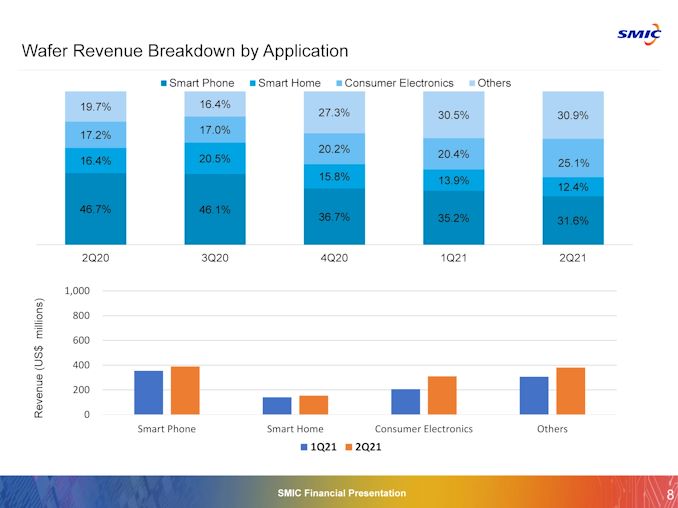 SMIC did not indicate when it expects the new fab to go online, but it is reasonable to expect it to become operational two or three years down the road. Despite this the company also did not increase its CapEx of $4.3 billion for 2021 from the number it announced earlier this year, perhaps indiciating that this will be a 2022 project when it starts. Once this happens, SMIC will be able to make a significant contribution to the global supply of semiconductors produced using mature fabrication processes.

The new fab will be China's only GigaFab for logic semiconductors (it has several for DRAM, which is considered separate). Here we are using TSMC's terminology for 'GigaFab', which is a 300mm fab with a production capacity of 100,000 or more wafer starts per month. 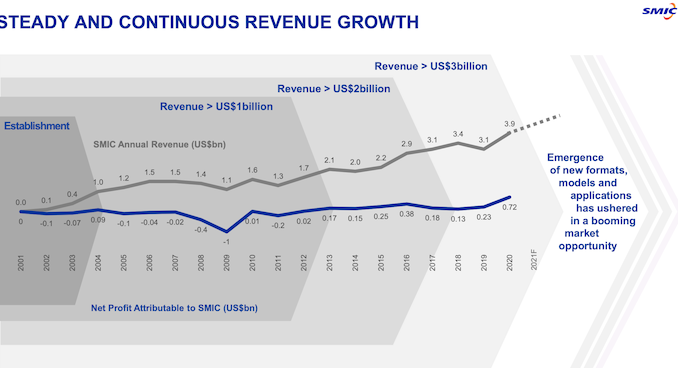 Earlier this year SMIC initiated a project to build a 300mm fab near Shenzhen for $2.35 billion. That fab is set to eventually achieve production capacity of around 40,000 wafer starts per month and use 28 and larger fabrication technologies. This smaller fab will start operations sometimes in 2022, as semiconductor capacity demand by local companies in China is growing.

In a bid to equip both fabs, SMIC inevitably has to use equipment produced by the U.S.-based makers, such as Applied Materials, Lam Research, KLA, and Axcelis. All of them applied for export licenses to supply SMIC since the foundry is in the U.S. Department of Commerce's Entity List earlier this year. While we do not know if they were granted, the very fact that SMIC announces a fab with an unprecedented capacity (for China and SMIC) indicates that it believes it can equip its production facilities with proper equipment, either from the US or elsewhere.

As always, SMIC will share ownership of the fab with authorities, in this particular case in the Lingang Free Trade Zone with co-investors. SMIC will own a controlling 51% stake, Shanghai Municipal People’s Government will own less than 25% and the outstanding 24% will be controlled by other investors set to be 'mutually found by SMIC and the local authorities.'

Mature process technologies, such as 40/45 nm, 55/65 nm, and 150/180 nm have been SMIC's livelihood, so expanding capacities for 300mm based processes (anything from 28nm to 45nm - larger process nodes tend to be on 200mm wafers) makes a great sense for the company. Furthermore, the company is investing additional money in 200mm fabs that use specialized nodes (90+nm) to produce chips for mixed-signal & RF, MEMS, and PMIC applications. 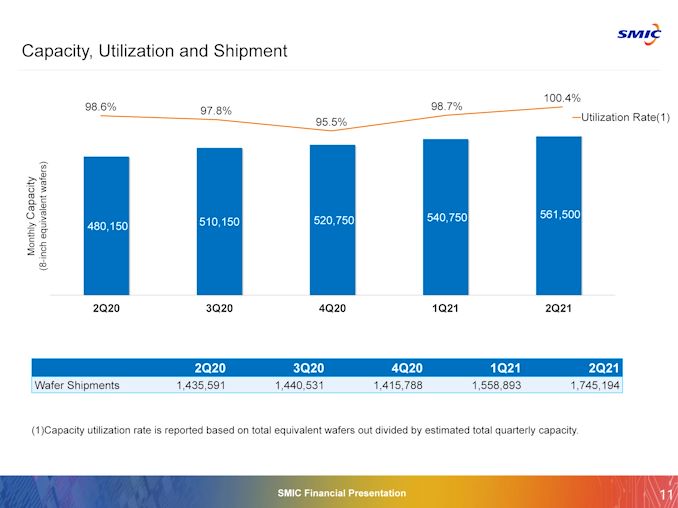 Based on SMIC's financial report for Q2 2021, demand for its 28 nm technology has been fluctuating in the recent quarters, whereas demand for its 14 nm FinFET technology remained at a rather low level. It's worth noting that SMIC isn't the major 28nm player in China here - TSMC and UMC lead the market. But as more applications migrate to this node, demand for chips is increasing, and SMIC's 28 nm will account for a larger portion of its revenue, which is growing despite its restrictions. 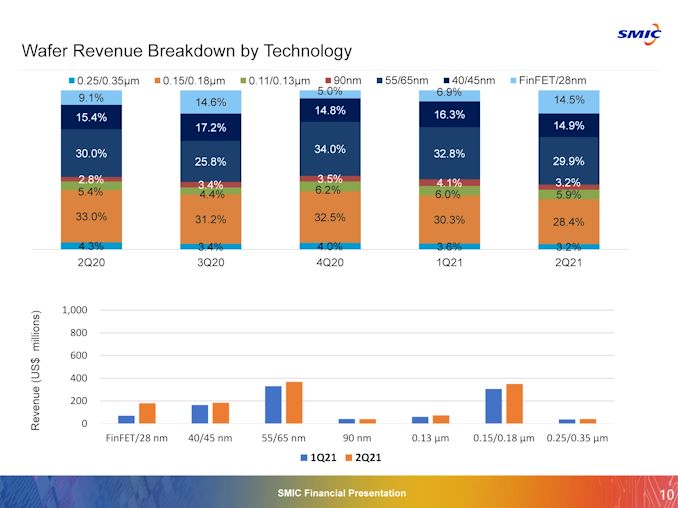 SMIC's fab utilization rate has always been rather high, but in Q2 2021 it rose to 100.4%, which essentially means that the company had to reduce its expected time on maintenance and focus more on production. This is a risky decision, so to avoid such moves in the future, SMIC needs to expand its capacities and with two all-new fabs it is doing this rather aggressively.

SMIC does have a 14nm process node with FinFETs, and is expanding this as well. In the first half of 2020 SMIC's 14nm-capable capacity was around 4,000 WSPM (based on the company's data from back then). By now, this capacity has increased to 15,000 WSPM, according to a CnTechPost story, which has not verified by the company itself.

SMIC is definitely not alone with its production capacity expansion plans - GlobalFoundries, TSMC, and UMC are also financing in additional capacity for mature processes. TSMC is investing in its fab near Nanjing, China. GlobalFoundries is expanding its Fab 8 in upstate New York and is installing new equipment in its Fab 1 near Dresden Germany boost its capacity.

But with such a huge demand for chips, it is inevitable that foundries will pull in some incredible amount of cash to fund their future development, which is exactly what SMIC is doing.