Occupying the upper end of what ASRock is considering its mid-range is a pair of 'Extreme' branded models. ASRock has segmented its Z690 stack well between DDR5 and DDR4 support, which makes it even easier to decipher which is which. The ASRock Z690 Extreme WIFI 6E and Z690 Extreme both share the exact same PCB, same design, same core feature set, but with one subtle difference. The Z690 Extreme WIFI 6E comes with a Wi-Fi 6E CNVi, while the regular model does not. Looking at the design, both Z690 Extreme models include an all-black PCB, with black metallic heatsinks, with integrated RGB LED lighting built into the rear panel cover, the chipset heatsink, and on the right-hand side of the board. 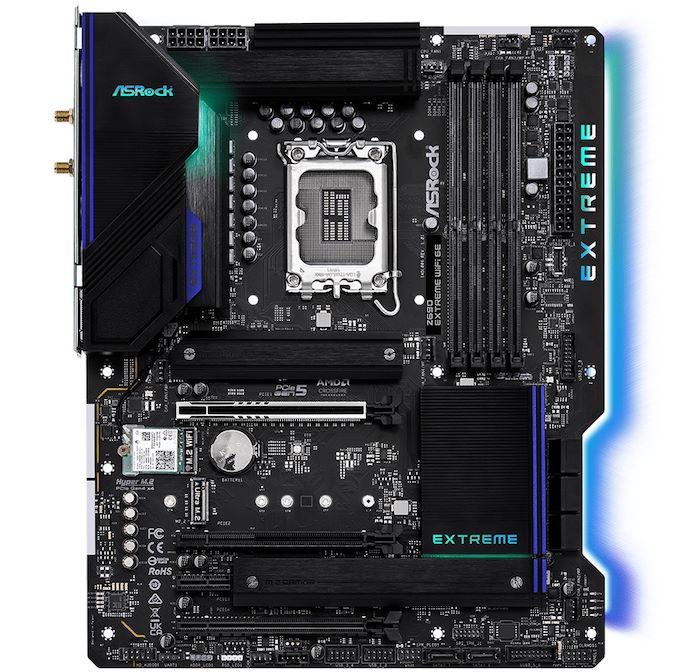 The only difference between the rear panel of both models is that the Z690 Extreme WIFI 6E includes a Wi-Fi 6E CNVi, while the regular Extreme does not.

Everything else is the same including one USB 3.2 G2 Type-C, one USB 3.2 G2 Type-A, and four USB 3.2 G1 Type-A ports. For users looking for USB 3.2 G2x2 Type-C, ASRock includes a front panel header for this. Other connectivity includes two Ethernet ports, one powered by a Realtek RTL8125BG 2.5 GbE controller, and the other by an Intel I219-V Gigabit controller. ASRock includes an HDMI 2.1 and DisplayPort 1.4 video output pairing, while five 3.5 mm audio jacks and S/PDIF optical are powered by a Realtek ALC1220 HD audio codec. Finishing off the rear panel is a BIOS Flashback button and a PS/2 combo port.