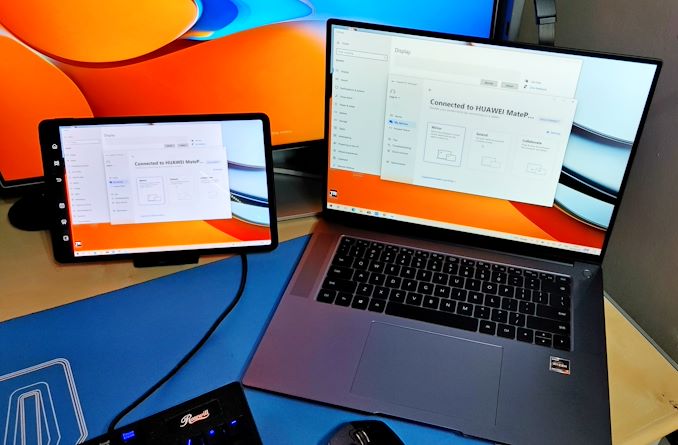 Having very recently reviewed the Matebook X Pro 2021 (13.9-inch), our local PR in the UK offered me a last-minute chance to examine the newest element to their laptop portfolio. The Huawei MateBook 16, on paper at least, comes across as a workhorse machine designed for office and on the go. A powerful CPU that can go into a high-performance mode when plugged in, and sip power when it needs to. No discrete graphics to get in the way, and a massive 84 Wh battery is designed for an all-day workflow. It comes with a color-accurate large 3:2 display, and with direct screen share with a Huawei smartphone/tablet/monitor, it means if you buy into the ecosystem there’s a lot of potential. The question remains – is it any good?

The Huawei Ecosystem: Trying to be Better than the Rest

To start this review, let’s talk about Huawei as a company creating consumer products. The company has limited visibility inside the US, despite trying very hard over the years, and being placed on the entity list was a big stopping point for a lot of commercial activity around its smartphone division. The companies with a US presence that supported Huawei in manufacturing and supply had to stop working with the company, or face repercussions. Since that date, while TSMC doesn’t work with Huawei (out of fear of losing access to ASML, which designs equipment for TSMC in the USA), but the combination of Intel, AMD, and Microsoft all have licenses to do so. As a result, Huawei is playing to its x86 and non-smartphone-like product lines.

Huawei’s goal here, regardless of the hardware, is to have an ecosystem that works together. That means sharing files, screens, using one tool to help another. This is all enabled, between the laptops, smartphones, tablets, and monitors at least, with a feature called Huawei Share. Using a custom wireless protocol, sometimes activated by NFC, a user with two or more of these devices should be able to connect them together for a collective ‘whole-is-greater-than-sum-of-its-parts’ experience. The MateBook 16 laptop we’re testing today is aimed pretty much at the professional use case where investing in an ecosystem like this, akin to an Apple user getting the phone plus laptop plus monitor plus tablet, affords additional benefits.

For this MateBook 16 review, Huawei’s UK team sent over the latest MatePad 11 tablet to test these features. I also happen to own a pair of MateView monitors (they were on sale recently with a 33% rebate) and a P30 Pro smartphone, so I’m perhaps in a better place than most to evaluate the ecosystem.

In the land of Laptops and Notebooks, there are some very strict delineations when it comes to size and utility.

There are a few devices that try and bridge the gaps between the segments. One of the most famous is the LG Gram 17, which puts ultra-portable hardware into a large chassis with a space-age magnesium chassis so while there are 17-inches of screen, it weighs under 3 lbs (1.35 kg). Some of the weight goes on batteries, so the Gram is reported as having brilliant battery life, but the price of ~$2000 for a 17-inch unit without discrete graphics is a pivot away from traditional pricing. 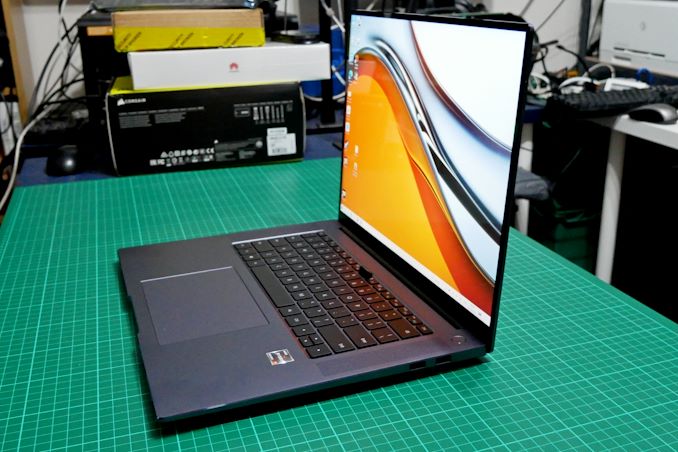 The Huawei MateBook 16 also tries to fit in a non-traditional gap in the laptop market. With a screen classified at 16 inches, it uses super-thin bezels to be a small 16-inches, to move as much into the Medium category as possible. It also takes a page out of the Gram, and doesn’t have discrete graphics, but it takes a 35 W processor which is more regular for its size, and a high capacity 84 Wh battery too for battery life that rivals a laptop from the small category. The MateBook forgoes the space-age materials, with a sandblasted ceramic/aluminium unibody, so we’re approaching 2 kg (4.4 lbs), which actually brings the price down. Our 16 GB / 512 GB model in Space Grey with a Ryzen 7 5800H in this review is the top specification model, to be listed at 1199 Euro or £1000 GBP (USD$1150 pre-tax), almost half the price of the Gram by comparison.

Users looking for any gaming will have to rely on the integrated Vega graphics. While not able to blow your socks off, eSports games will run with ease at reasonable quality settings. This is good given that the display isn’t a standard 3:2 resolution – for the smaller MateBook X Pro, we had 3000x2000 which made sense, but 2520x1680 is a little out of left field, good for 189 pixels per inch. The maximum brightness isn’t incredibly high, but the IPS blacks are better than the Pro we recently tested, leading to a better contrast ratio.

That 16 GB of DDR4-3200 memory is going to be a bare minimum for a workhorse machine, when really 32 GB would be a good upgrade, however Huawei doesn’t like to keep multiple models in stock, so each of the processor options gets the same memory/storage. On the storage front, we see the same Samsung PM981a NVMe drive that Huawei has put in its laptops for at least a couple of generations now, if not more. 512 GB is a reasonable capacity for this price, although again, heavy workers might want something more.

The processors available for the MateBook 16 come from AMD’s higher 45 W Ryzen range, although these are the Ryzen Mobile Zen 3 models which Huawei runs at 35 W mode by default. This helps save the battery a bit when on the road, but when plugged in, users can initiate ‘Performance Mode’ (by pressing FN+P) to unlock a higher-powered mode for higher performance. This is a good way to offer the higher performance of a chip, and we’ll see in our testing for the review what it does to the benchmark numbers. The high-performance mode is supported with dual internal fans, which are visible through the bottom grille. The air is pulled from underneath and expelled through the back, to which Huawei uses some propped feet with gaps to assist when using on a desk. 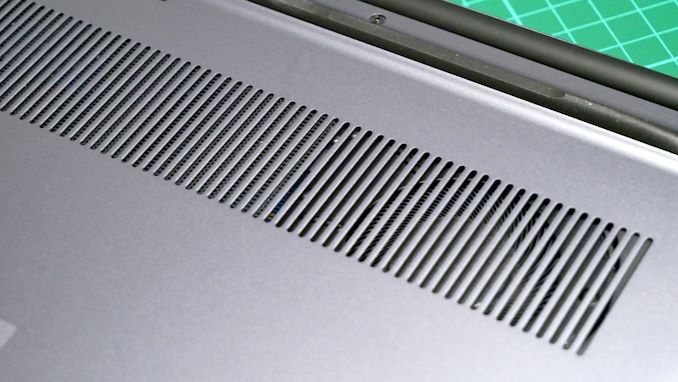 The 84 Wh is a sizeable battery when we consider that this laptop does not have discrete graphics. However, as it relies on integrated graphics, this is a large battery to work with. Huawei adds in a 135 W charger, however in our testing we found that the charger only moves to 135 W when the system is running a heavy workload in Performance mode. Otherwise, at idle, we see 50 W charging, or when the lid is down, it will charge at 70 W. The unit can charge on both of its Type-C ports on the left-hand side. More on this later in the review. 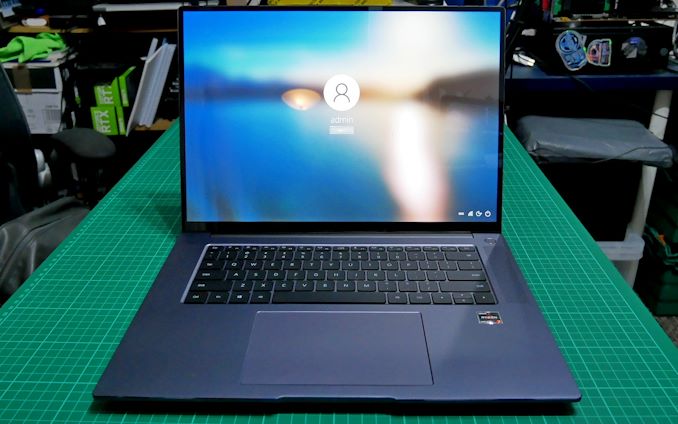 On the design, it has the same sandblasted ceramic/aluminium feel that I mentioned in our previous MateBook review, although it’s a little more subtle. The weight of the laptop is still there, and being used to smaller 13-14 inch devices for the last five years, picking up a 2 kg/4.4 lb laptop is still a little unwieldy for me. I feel that with a discrete GPU, it would be another 0.45 kg / 1 lb, making it even worse. I’m all for good portable devices to work on the go, but this is very much more aimed at in-country ‘train/coffee shop/in a meeting’ work, rather than ‘sitting in economy class on a plane’ work. This is a device I could see easily being carted around the office from meeting room to meeting room, connecting to a large monitor wirelessly at a desk. The full-sized HDMI certainly helps with that meeting room life, adding another display. I suspect though that the more of the Huawei ecosystem you’re bought into, the more you can get out of it.

Aside from the two Type-C ports on the left, which also charge, there is a 3.5mm headphone jack and that full-sized HDMI. On the right are two USB Type-A ports. 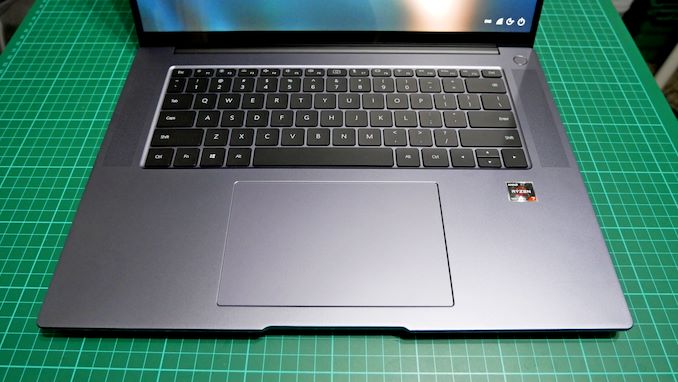 The keyboard is a scaled identical version to what we saw in our recent MateBook X Pro review, with the different-sized arrow keys and the keyboard sitting in between the main speakers. The trackpad is large and easy to use, although I will admit to preferring physical L/R mouse buttons on my laptops.

The power button is above the keyboard and to the right, with the same feel as the chassis but recessed. I can’t tell you how much I prefer this implementation of a power button, compared to a lot of laptops that put it beside the delete key (and gets accidentally hit way too often) or on the edge of the laptop (where it gets touched any time you move the device). Huawei also put in one of the latest Goodix fingerprint sensors into the power button, the same as it does its smartphones, which are fast and highly accurate, compared to some other fingerprint implementations on laptops in this class. 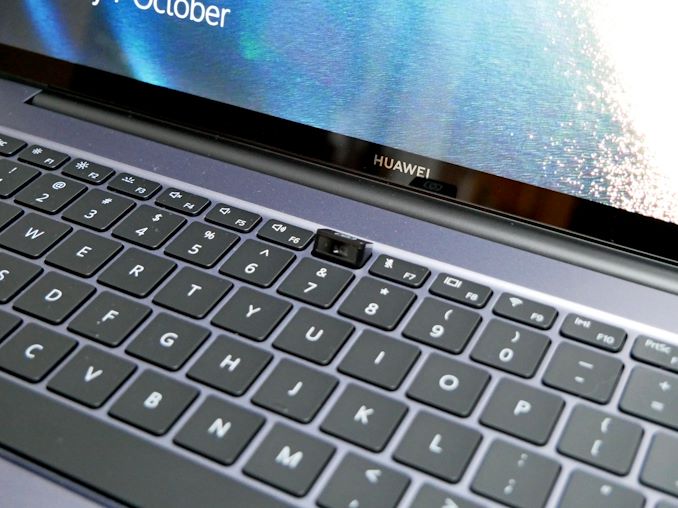 However, the downside to the design is the built-in camera. In order to save space in the display chassis and minimize bezels, Huawei has removed it and put it in the keyboard, underneath the key between F6 and F7. When you press the button, it springs up, in full 720p glory. Unfortunately, the angle of the camera means that whoever you are conversing with is going to get a full snot-shot of everything living in your nose. This is mildly more ridiculous than when Dell put the camera in the bottom of the monitor. I appreciate Huawei’s ingenuity here to remove the camera from the top of the display for a better display experience, but it shouldn’t come at the expense of a worse webcam setup.

In part of this review, we’ll look at one of Huawei’s listed strengths – the ecosystem of connectivity. The goal here is that with any Huawei branded device, you can connect wirelessly to any other for file transfer, screen sharing, or screen extension. Depending on the device, this connection is via NFC or through a couple of menus. I’ve got an array of Huawei hardware to test this on, and see if it promises what it says.

For the rest of the review, we’ll be looking into the performance of the MateBook (both regular and in Performance Mode), battery life and charging, display quality, storage performance, and if those integrated graphics are a substitute for a discrete option.