On the MacBook Pro Apple connects both GPUs to the display via a multiplexer and can instantaneously switch between which one is driving the panel without any frame buffer copying. With both GPUs connected and real time switching, accessing Quick Sync isn't an issue. On the iMac however, with only the discrete GPU connected, it is a problem. Apple claims this is why it used Intel's Z68 chipset: to access Quick Sync without a display output connected to the processor graphics. The Z68 based iMac actually went on sale before Intel's NDA on the Z68 chipset lifted. On the PC side we have Lucid's Virtu but for some reason Apple needs to use Z68 to achieve a similar end result. All other Z68 specific features go unused - there's no support for SSD caching and obviously no support for overclocking.

The other major change from the MacBook Pro is that the Thunderbolt controller no longer branches off of Sandy Bridge's on-die PCIe controller. Let's look at Intel's Z68 block diagram: 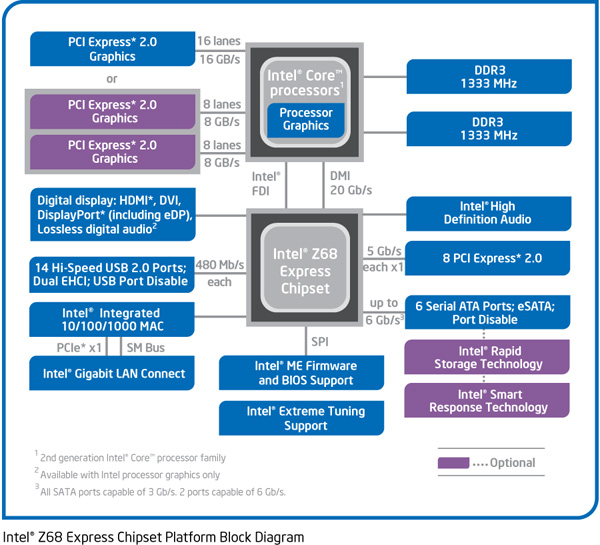 With Westmere (Clarkdale/Arrandale) Intel integrated a 16-lane PCIe 2.0 controller onto the processor die. The same controller made its way into Sandy Bridge. Traditionally these lanes are used for discrete graphics, the other major bandwidth hog within your system however the lanes are open to be used by PCIe device. In the 2011 MacBook Pro Apple used four of these lanes for Intel's Thunderbolt controller, leaving the discrete AMD GPU with a x8 interface. Even high end desktop GPUs aren't limited by a x8 PCIe 2.0 interface so there was no real performance penalty.

On the 2011 iMac however, Apple gives the discrete AMD GPU all sixteen lanes from the CPU. The Thunderbolt IC (which carries a different model number) branches off the Z68 chipset, which has 8 PCIe 2.0 lanes by itself. 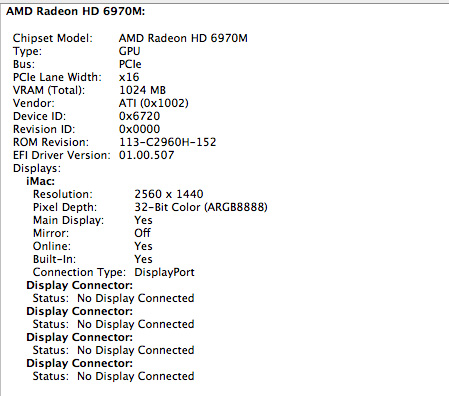 Only four lanes are used by Intel's Thunderbolt controller, the remaining lanes are used for things like Bluetooth and WiFi. Do the math and you'll realize that four PCIe 2.0 lanes are only good for 20Gbps of bandwidth, plus DMI between the Z68 chipset and Sandy Bridge is limited to 20Gbps itself. A single Thunderbolt port is capable of 20Gbps of bandwidth (10Gbps in each direction), so that works out well (if you don't use any of the other PCIe devices in the system at the same time). While the 21.5-inch iMac has a single Thunderbolt port, the 27-inch model has two. That's a total of up to 40Gbps of bandwidth to Thunderbolt devices, but only 20Gbps to the controller itself. Don't be fooled by the presence of two Thunderbolt ports on the 27-inch iMac, you don't get any more bandwidth than you would on the 21.5-inch model - you can just hook up more displays.

Each Thunderbolt port on the iMac is good for at least one display output depending on what GPU you have driving it. The high end 27-inch iMac has two Thunderbolt ports, each of which is capable of driving two displays. Yes, you could theoretically have a 5-display setup driven off of a single iMac (given that even the upgraded iMac only has a 1GB frame buffer I wouldn't recommend doing such a thing). 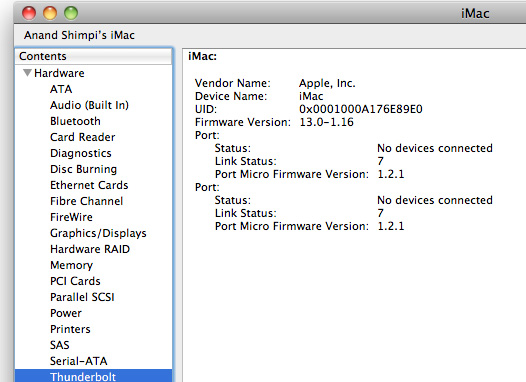