When we first tested the SM951-AHCI in February, I noted that the drive seems to be suffering from thermal throttling when subjected to sustained workloads, especially sequential writes. I promised to run tests with a heatsink attached to see what the performance would be without any thermal limitations and now I have some results to present.

For these tests I used the stock 512GB SM951-AHCI and borrowed the M.2 to PCIe adapter with a heatsink from Plextor's M6e Black Edition. Unfortunately I had to send my M6e samples back before I could test the SM951-NVMe, but the purpose of these tests is more to show the impact of thermal throttling in actual client workloads rather than demonstrate the maximum peak performance.

It's clear that the impact of thermal throttling in real world workloads is insignificant. In a worst case scenario where the drive is under a heavy IO workload the performance loss can be 5%, but in anything less intensive the difference is within the margin of error. Even though we truncate idle times to 25µs, it's enough to lighten the workload and reduce thermal throttling compared to a sustained synthetic workload. 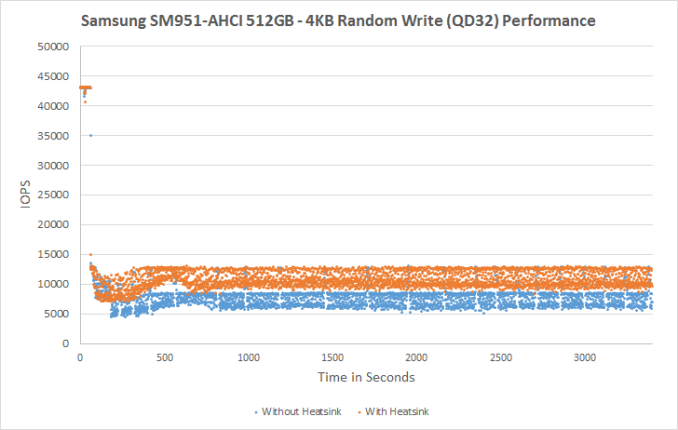 Under a sustained 4KB random write workload the difference is more significant as without the heatsink the SM951-AHCI averages 7,878 IOPS, whereas the heatsink bumps that up to 10,873 IOPS. 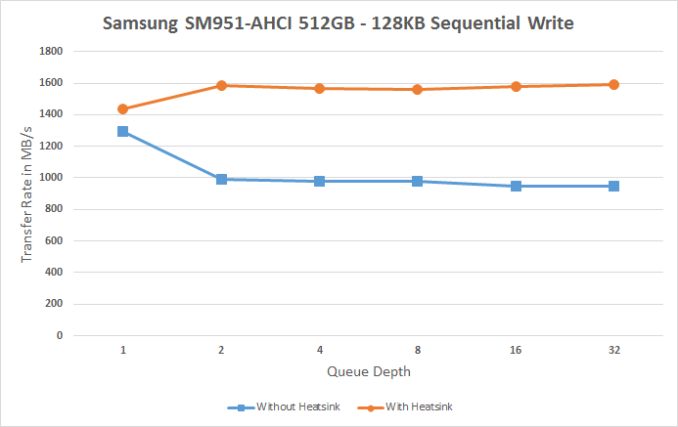 The same goes for sequential write where throttling is evident and even more significant compared to the random write workload. Without the heatsink the SM951 can sustain peak throughput for about two minutes, which may not sound long but at 1.5GB/s that would translate to 180GB of data written and obviously such massive transfers are very rare.

To sum things up, there is no need to worry about thermal throttling under typical client workloads. There won't be any notable performance loss unless you subject the drive under an intensive sustained workload, which may be relevant to some professional users (e.g. high-end video editing), but not for the typical enthusiast and power user. If you want to ensure that your SM951 operates at full performance at all times, it's not a bad idea to get an adapter with a heatsink, but there is no loss in running the drive without one.