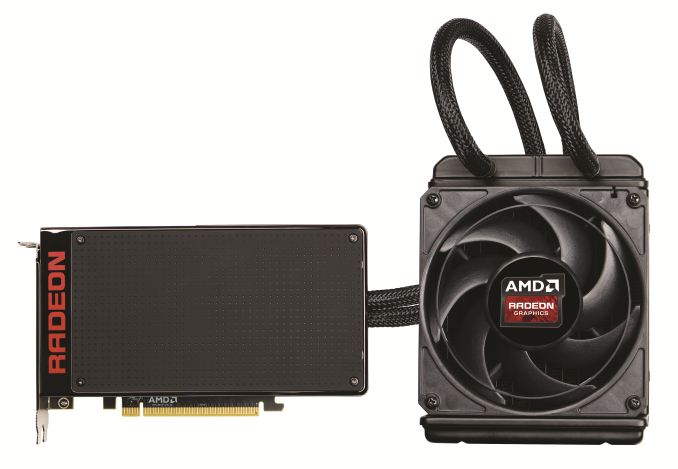 On a meta note this evening, over the last week I have received a number of questions about last week’s Radeon R9 Fury X review. Several of these questions were regarding the matter of pump noise, a matter which has been called into question for the original run of R9 Fury X cards.

As a quick reminder, here’s what the noise situation looks like on the R9 Fury X. 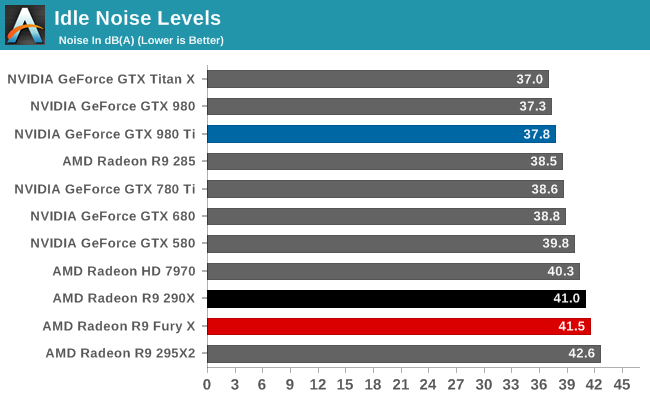 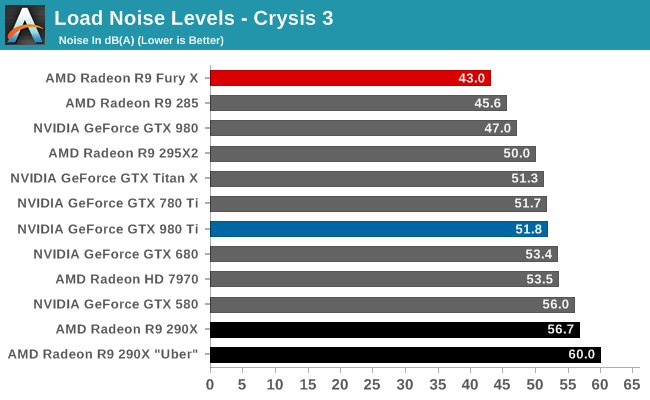 In short, the R9 Fury X has great overall noise performance under load. However the pump doesn’t idle all that well, and as a result its idle noise performance is second only to the R9 295X2, a card with two pumps. Compared to contemporary competitors like the GTX 980 Ti, the R9 295X2 ends up being just under 4dB(A) louder than the competition, a not insignificant amount when we’re talking about idle noise levels, and is why we don’t believe the R9 Fury X to be a good fit for HTPCs or other environments where idle noise is of great concern.

Meanwhile there is a secondary matter, which is the tone of that noise. Several of our colleagues, including Tom’s Hardware, PC Perspective, and The Tech Report, have reported that their samples are producing a whining noise. This was not an issue with our sample, and is the crux of the questions I have received on the matter.

So to get right to the point and to answer those questions sent my way, does the R9 Fury X whine? The fact that as many other empirical-minded sites are reporting issues and that AMD has issued a statement on the matter (more on this later) certainly points to a whining issue that needed to be addressed.

At the same time I’ve also had several people ask if our card is somehow different – why we aren’t experiencing whining – and the best answer there is due to variation in the production process leading to different amounts of noise from each card. Just like chip quality there will be minute variations in each card produced, and in this case our card would appear to have varied in such a way as to not suffer from vibrational issues to the same extent as some other cards, dampening enough to eliminate the whining (or at least make it unnoticeable). Which again, just like chip quality variations, doesn't mean our card is identical to all other cards, only that in our specific case we aren't experiencing whining, and is why we haven't had any whining to report on so far. Meanwhile I would also note that our testing is with a closed case, however the case is open for noise testing to more directly measure the video card. 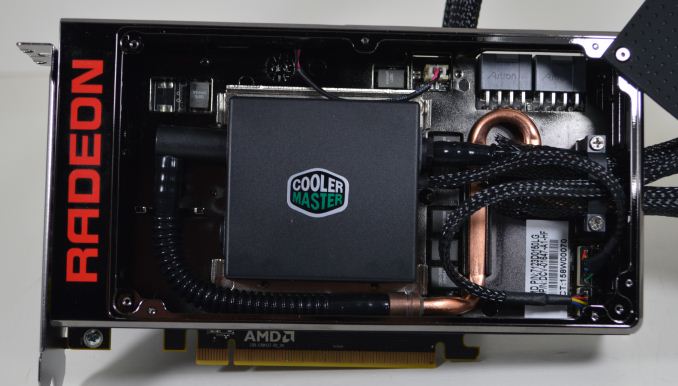 In any case, for current Fury X owners and any prospective buyers, AMD has issued a statement earlier in the week, essentially addressing the issue and discussing how it is being resolved in latter batches.

We have received feedback that during open bench testing a small number of Fury X cards emit a sound from the high speed liquid cooling pump that, while not loud, is bothersome to some users. While the vast majority of initial Fury X owners report remarkably quiet operation, we take this feedback seriously, as AMD’s mission is to always deliver the best possible experience to our Radeon customers.

AMD Radeon R9 Fury X customers demand and deserve the best, so adjustments in the sound baffling adhesive compound were applied in the assembly of the high speed cooling pump to address the specific sound a few end users experienced as problematic. This improved the acoustic profile of the pump, and repeat testing shows the specific pitch/sound in question was largely reduced through adjustments to the sound-baffling adhesive compound in the pump.

AMD will work with its graphic card partners to ensure the satisfaction of the small number of initial customers who observed this specific sound and experienced it as bothersome. AMD is confident that on-going production of Radeon R9 Fury X product reduces the specific sound in question, but this is also a highly subjective matter with wide differences in PC case builds and room acoustics.

The AMD Radeon™ R9 Fury X radiator fan is near silent, and this makes any sound from the high-speed pump more noticeable to some end users, especially during open bench testing. Thus although the overall sound levels are remarkably low for an enthusiast product, AMD has worked to reduce the specific sound that some customers report as bothersome.

AMD for their part believes that the issue has been resolved going forward, and that is something that will need to be tested as the newer batches become available.

Finally, in the meantime there is the matter of the existing cards. AMD’s statement unfortunately doesn’t address the matter, though this is not unexpected since they aren’t directly selling the card to consumers. From what we’re hearing, the board partners are addressing this matter themselves, so any current Fury X owners experiencing pump whining would need to go to their board partner that sold their card for support.

The catch at the moment is that after the initial launch, new R9 Fury X cards remain sparse. A quick check on stock history for the card shows that while new shipments come in almost daily, they also sell out in under an hour, which indicates that cards are hard to come by. So depending on how many support requests are filed and how board partners address the issue, it may not be possible to replace every problematic card at once. Though to be clear, this is speculation on our part.