One of the biggest changes to the motherboard scene since the release of Skylake is the distinct lack of motherboards designed to cater for more than two PCIe cards using CPU-based lanes. Back in the era of the Z77 chipset, I gathered four motherboards that had the PLX8747 PCIe switch installed, allowing for >2 GPUs, and we really went to town on the detail and benchmarking. But with Z170, the use of the this chip has severely diminished for two reasons. Firstly, GPUs are getting powerful enough to drive 1440p gaming by themselves fairly easily, and secondly, Avago bought PEX, the company that makes these switches, and the price for them essentially doubled overnight. As a result, only a few motherboards for Z170 will have them, such as the Z170-Gaming G1 we reviewed at the end of last year, because of the consumer price concerns and the market to which they are aimed. The GIGABYTE model we reviewed was $500, and featured all the bells and whistles such as Thunderbolt 3 – the Supermicro motherboard announced last week with this PLX chip is the C7Z170-OCE but slides in at $300. 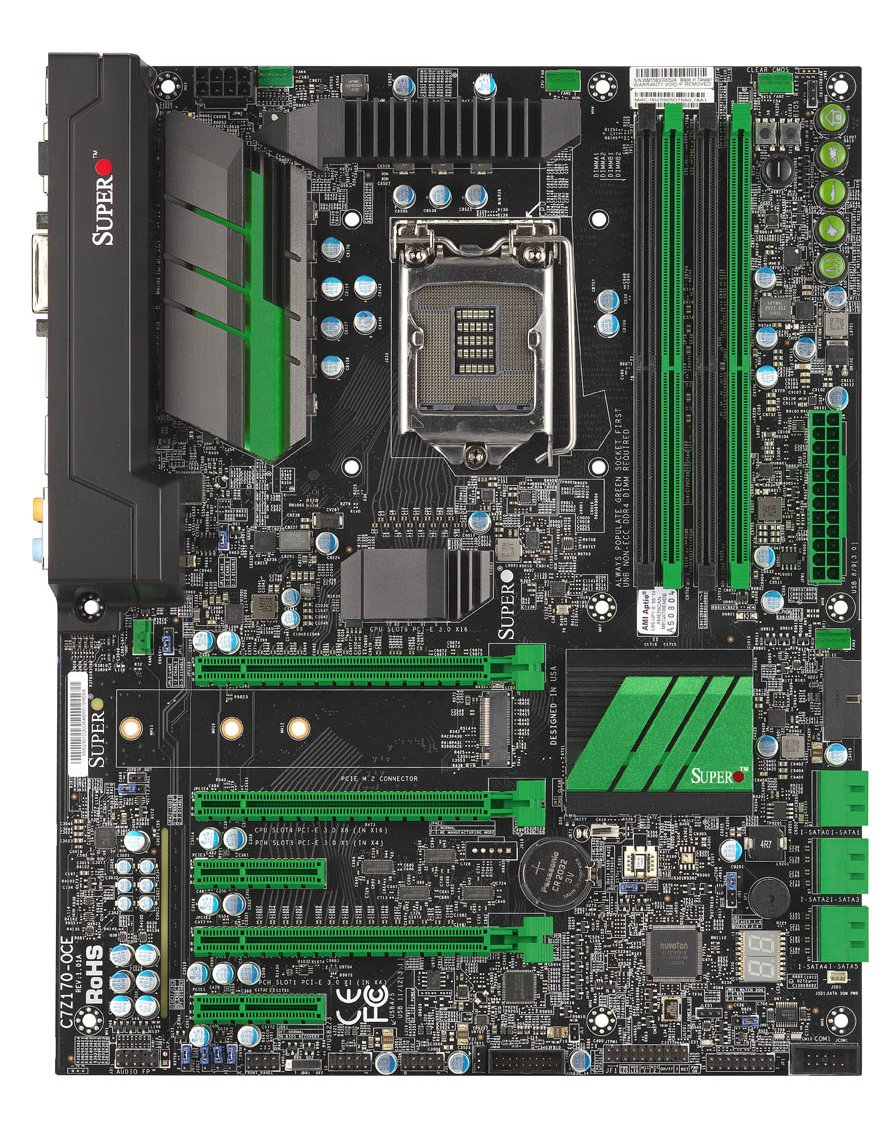 This motherboard aims to be ‘green’ in more than just the aesthetics. Supermicro’s value add to the community, and the part that they aim to be the differentiating factor, is their long standing role in the server space. They want to use this reputation to promote their use of server grade components on consumer platforms. This will come through in their regular consumer motherboard segments (such as the C7H170-M which we’ve nearly finished testing) and their gaming motherboard line, which now has a name: SuperO.

The C7Z170-OCE is aimed squarely at the three-GPU user on Skylake. The PLX8747 chip splits the PCIe lanes into x16/0/x16 or x16/x8/x8, leaving the chipset enough space to add in an M.2 slot for up to PCIe 3.0 x4 bandwidth and plenty of space on the bottom to make sure all the headers can still be used when dual slot cards are in play. We have tested the PLX8747 before, and found that the chip does not noticeably (sub-1%) reduce performance when in use. As SuperMicro is still feeling its way around the consumer motherboard space, we are seeing features that enthusiasts are used to being promoted as positive points. So for example this board also gets some buttons for pre-overclock modes in the top right, and promotes features such as ‘SuperFlash’ which other motherboards have had for almost half a decade. Nonetheless, the fact that these exist now is still a plus.

Audio is provided by a Realtek ALC1150, and networking via Intel I219-V and Intel I210-AT controllers. Due to the use of dual Intel controllers, Supermicro lists teaming, fail over and load balancing as features of this combination. USB 3.1 is given on the rear in a Type-C configuration through the ASMedia ASM1142 controller, although it seems a little odd that only one port of this controller is being used. There is another ASM1142 onboard near the bottom, which is connected to a USB 3.0 header – the motherboard is advertised as having a USB 3.1 (10 Gbps) header, but this standard isn’t finalized so we are looking into whether Supermicro is actually validating this header at double the data rate than normal. (It turns out this header will support two USB 3.0 or one USB 3.1, but it requires the right connectors/ports which will not be included in the bundle.) 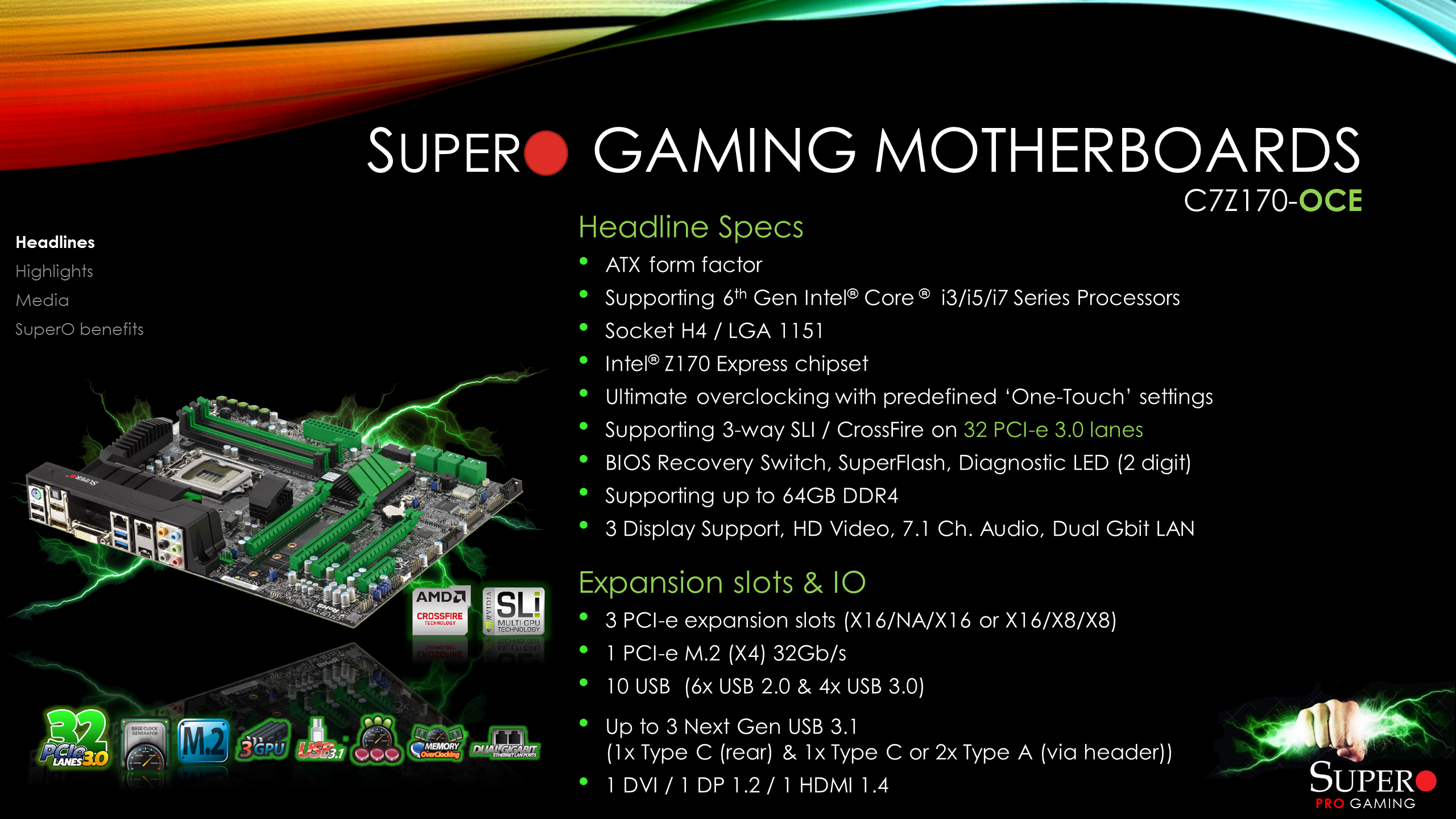 On the software side, our upcoming C7H170-M review will go into an interesting feature called SuperDoctor 5, which is a pseudo server-like web interface for motherboard features and monitoring.

At this point, the C7Z170-OCE will be the cheapest tri-PCIe focused (both SLI and CrossFire) on the market for Skylake at $300. Also anyone wanting to build a green machine will love the aesthetic. I am told it should hit the shelves by the end of January.