The look of the X170-Extreme ECC is clearly aimed at a form of military camouflage, with the VRM heatsinks, rear IO cover and the chipset using a form of desert destruction motif usually associated with military clothing for sandy regions. On these heatsinks and covers we have 'G1 Gaming' and 'Ultra Durable' listed, indicating some of the branding GIGABYTE was unable to fit into the name of the motherboard. Nonetheless the board seems aesthetically clean at first glance, something that is becoming a staple in order to catch a potential customers’ attention when scrolling through a list of potential options. 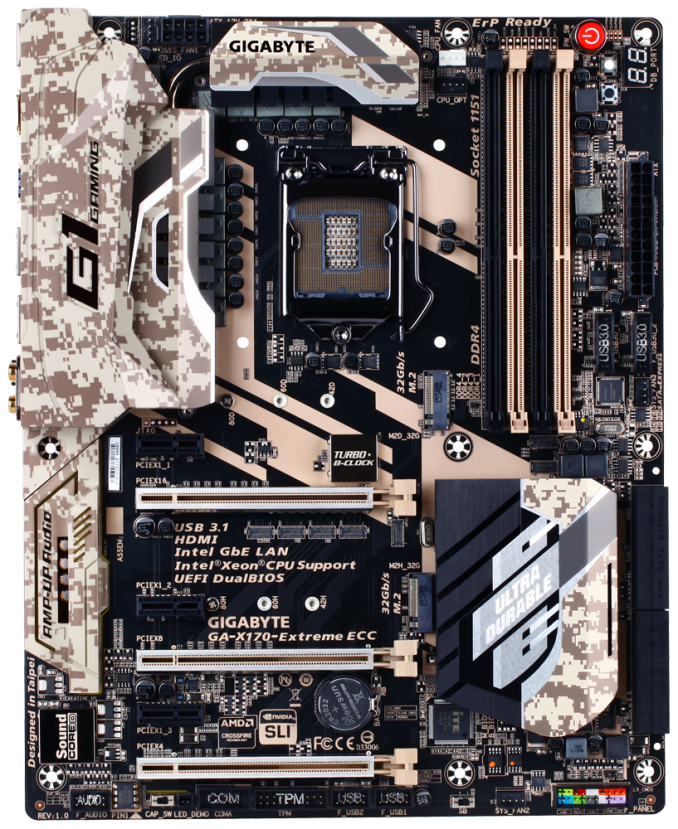 The use of a server grade chipset of the X170 gives no immediate changes to the rest of the hardware or look on the motherboard - we gain support for Xeons/ECC memory and lose overclocking, both of which are primarily a firmware change. Because GIGABYTE is labeling this as the 'Extreme' model, it comes up as one of the most well equipped C236 motherboards available

Starting with the socket, GIGABYTE is using their enhanced gold plated pin socket for a better contact with the processor (i.e. it reduces long-term corrosion) and the socket area is clean with respect to other components. There's no white grid printed on the PCB showing Intel’s minimum socket area requirements - instead GIGABYTE has decided to implement the camp board look to keep the visuals crisp. The socket is supplied by a twelve phase power delivery, with an International Rectifier solution that is typically used on GIGABYTE's high end products. The heatsink on top of the power delivery is certainly as substantial as to be expected with a board of this price.

Around the socket area are four of the five 4-pin fan headers on the board - a 4-pin CPU and 4-pin CPU_OPT header are just above and to the right of the socket (OPT being for liquid cooler pumps), with a 4-pin SYS header on the top left and another just below the 24-pin ATX power connector and USB 3.0 headers. The final 4-pin header on the motherboard is on the bottom next to the front panel connector.

Moving clockwise around the board, the DRAM slots use alternate colors such that memory pairs use the same color. The slots use single side latches, making it easier to install memory while large GPUs are installed but users must make sure the memory is firmly in place. The slots here support up to 64GB total of DDR4 ECC un-buffered (for Xeons/i3 only) or non-ECC un-buffered (all).

Above the memory slots are a series of voltage read points, should a user need to find a true value rather than a software value. On the top right is the big red power button, flanked by a reset button and a BIOS switch button as well. Below this is the 24-pin ATX connector and two USB 3.0 headers powered by the nearby Renesas USB 3.0 hub. As this is a hub, bandwidth between the ports will be shared based on the upstream link of the Renesas chip.

Beneath this is the large chipset heatsink, with the camouflage styling and the words 'Ultra Durable'. Next to this are the storage ports, with a total of eight SATA ports available along with three pairs having SATA Express support (and we've covered the futility of SATAe in 2016 before, many times, many many times) via the chipset. The other two SATA ports come via an ASMedia ASM1061 controller. On the storage front, the system also has two M.2 2280 slots supporting PCIe 3.0 x4 drives (not SATA) with RAID capabilities.

A word on the audio solution here - for most other motherboards we would expect an upgraded Realtek solution, however this will probably be the only C236 motherboard with a Creative Sound Core3D audio codec with support for Creative's Sound Blaster Recon 3Di. This chip is shielded, and GIGABYTE has implemented PCB separation along with upgraded filter caps and bundled in the Creative audio software. We had slight issues testing this, as some of the software features interfere with our test and are unable to be turned off. However, some would argue that the features the audio solution provides are still part of the experience, so it's more of a test failure than anything else. 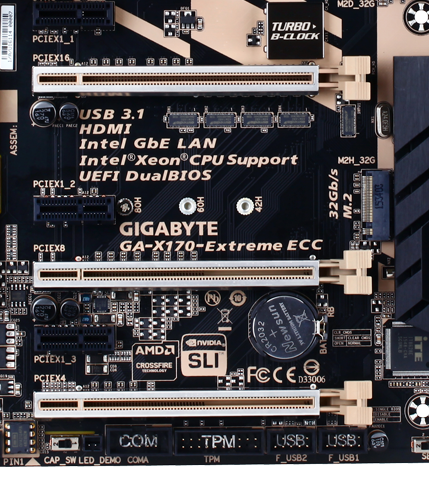 For the PCIe slots, GIGABYTE implements three-way support from the CPU, offering x16/0/0, x8/x8/0 and x8/x4/x4 operation with the large PCIe slots. This board is one of the few C236 boards on the market that will support SLI, but it is worth noting that NVIDIA has an x8 requirement per card for SLI, so anyone installing anything in the third slot will lose SLI. Nonetheless each of the large slots use PCIe guards designed to withstand greater stress and shear forces applied to the slot, which may occur with heavy GPUs during shipping. This is a relatively new feature across the industry, aimed as a user plus and to reduce return rates. The other three slots are PCIe x1 from the chipset.