Our first close up of the Mini-ITX sized board shows us there is a lot squeezed in this tiny amount of space. The board chooses a rather plain design without any aesthetic stenciling allowing for easy integration into most systems. We can see the 4+2 phase power delivery at the 9 o'clock and 12 o'clock positions around the socket as well as a rather thin, but tall, silver-colored heatsink on top of the four phases on the left. This C7Z370 has two reinforced DRAM slots able to support up to 32GB of DDR4 in dual channel mode. The single PCIe slot is also reinforced and receives the full x16 bandwidth from the CPU.

Most headers on the board are found across the top, including the 8-pin EPS 12V, RGB header, two fan headers, and the front panel header are all across the top. Also along the top are a couple of LEDs for NIC activity as well as fan failure headers - features more typically associated with server level boards. The right side contains the 24-pin ATX 12V connector as well as four SATA ports. The chipset heatsink sits directly above the PCIe slot with the first M.2 slot stretching across it over the 'SuperO' name (second M.2 slot is on the back of the board).

The C7Z370's RGB LED implementation comes from 12 LEDs located on the back side of the board under the 24-pin ATX connector extending down the length of the board to the SATA connectors. Outside of that, the board is void of other aesthetic RGB LEDs. The RGB LEDs are addressable in three groups of four and controlled by the SuperOBoost software. 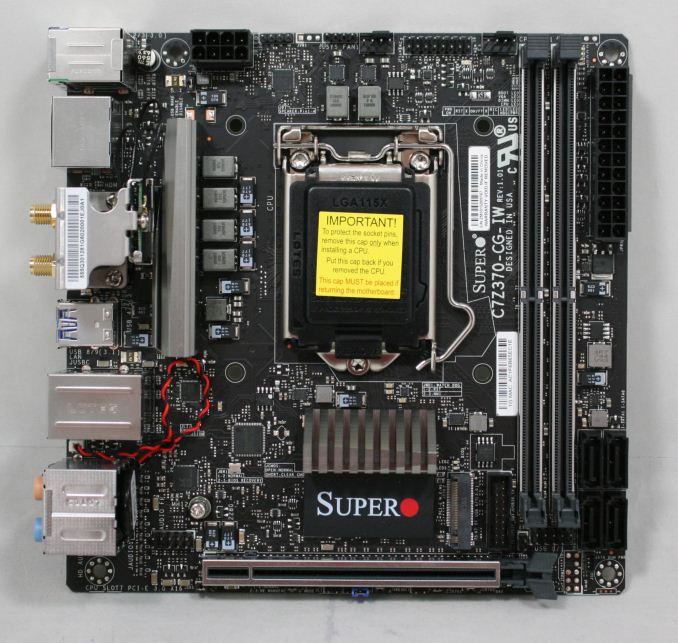 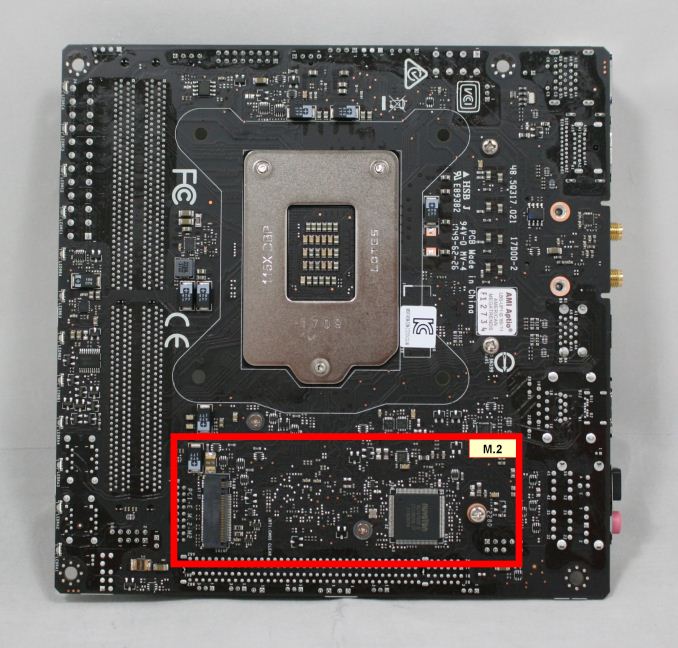 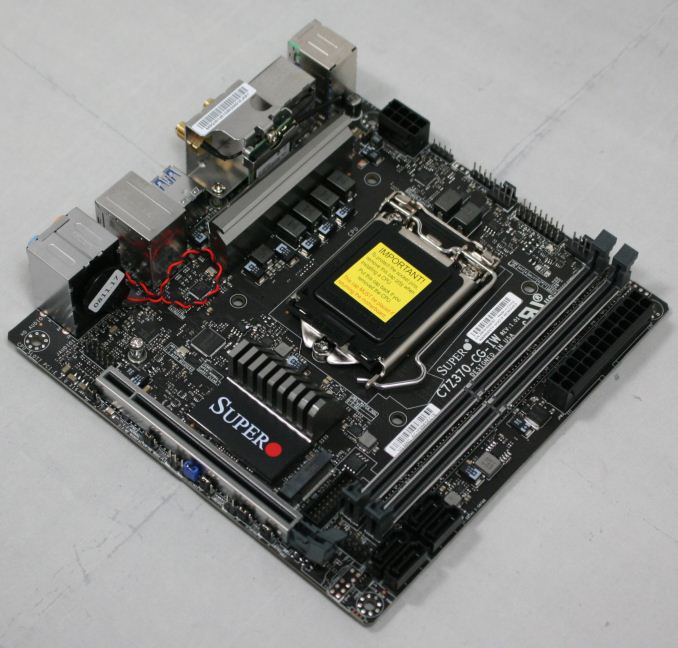 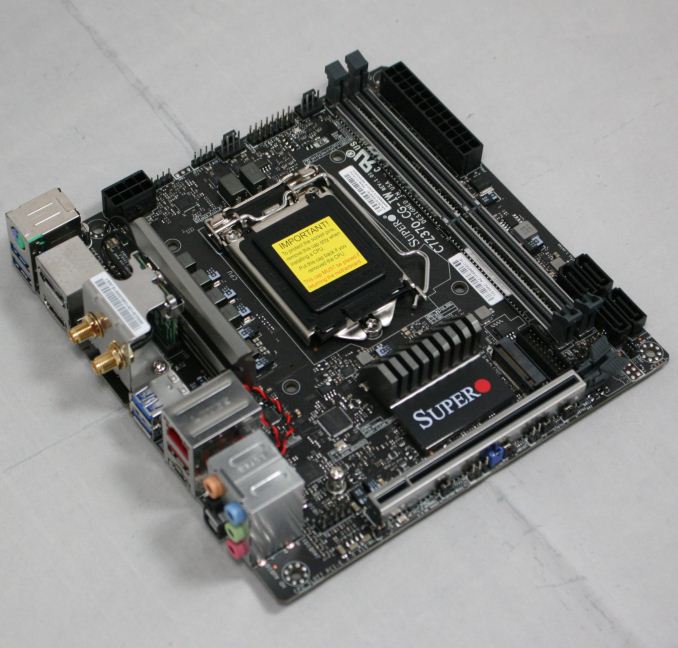 The SuperO C7Z370-CG-IW has a total of two fan 4-pin fan headers both located across the top of the motherboard. Each header supports both DC and PWM control and can be controlled through the BIOS or the SuperOBooster application. Though it only has two headers, each header supports a maximum of 2.5A (30W) output which allows users to piggyback a couple of fans onto one header.

The VRM is a 4+2 phase configuration with four responsible for delivering power to the CPU Vcore and the other two assigned for the iGPU. This is the first time we have seen power delivery parts all made from Monolithic Power Systems. The board uses an MPS MP2955V digital multiphase controller working in conjunction with the MP86908 50A Intelli-Phase integrated power stage. The other voltage domains including VCCSA, VCCIO, and Memory use MPQ8633 step down controllers rated at 12A each. 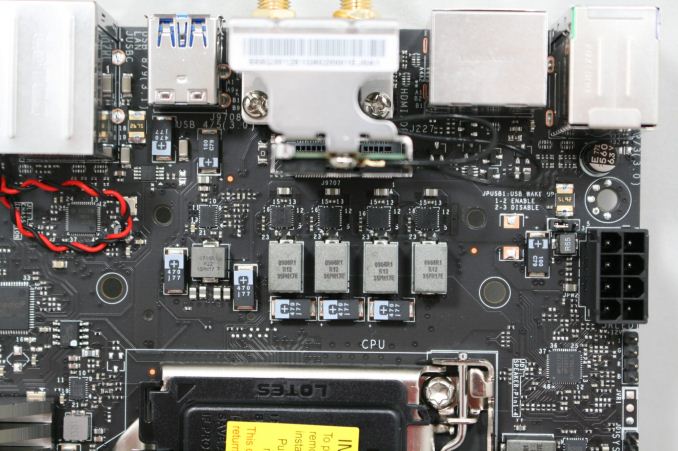 The right side of the board holds the 24-pin ATX connector and the four vertically oriented SATA ports. On the other side of the DRAM slots close to the PCIe slot is a front panel USB 3.0 header. Outside of that, there isn't too much to see outside of some power bits in between. 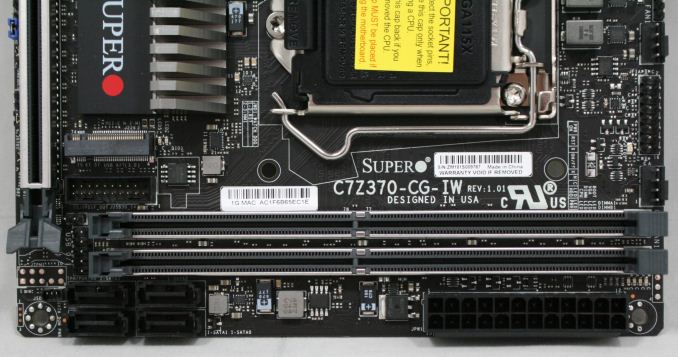 A closeup of the four SATA ports. The Z370 platform supports up to six SATA ports, but due to a lack of board real estate and to eliminate port sharing with the M.2 devices, SuperO chose to use four. Between the two M.2 devices and four SATA ports, this should be plenty for most users, particularly those using this for gaming or an HTPC. What could be said about these ports however is that due to the way that SATA cables use latching mechanisms, in this orientation it means that any user wanting to remove a cable from the ports on the bottom will have to remove the cable from the top port first. There are ways to design around this. 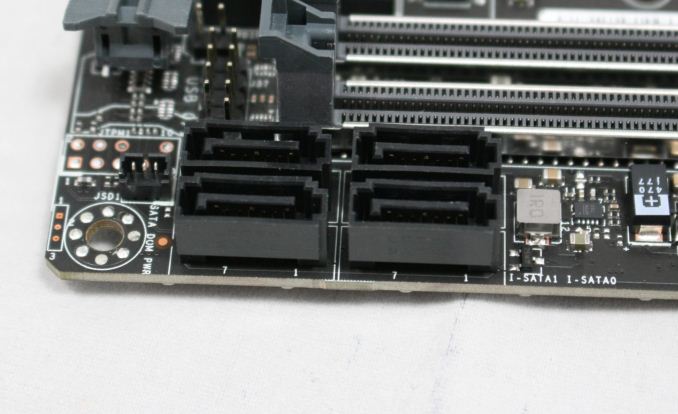 The bottom picture shows a close up of the reinforced PCIe slot as well as a the jumpers below it. The jumpers include chassis intrusion, ME manufacturer mode, clear CMOS, and an OC button.

The back panel IO is devoid of many colors outside of the USB but has most of what we come to expect from a mid-range motherboard. From left to right we have:

Second-tier motherboard manufacturers like Supermicro are not as keen on adding items into the box as others - here we get the standard set of materials, including SATA cables and Wi-Fi antennas. Interestingly we do get four SATA cables, one for each port, which is perhaps a little unexpected. 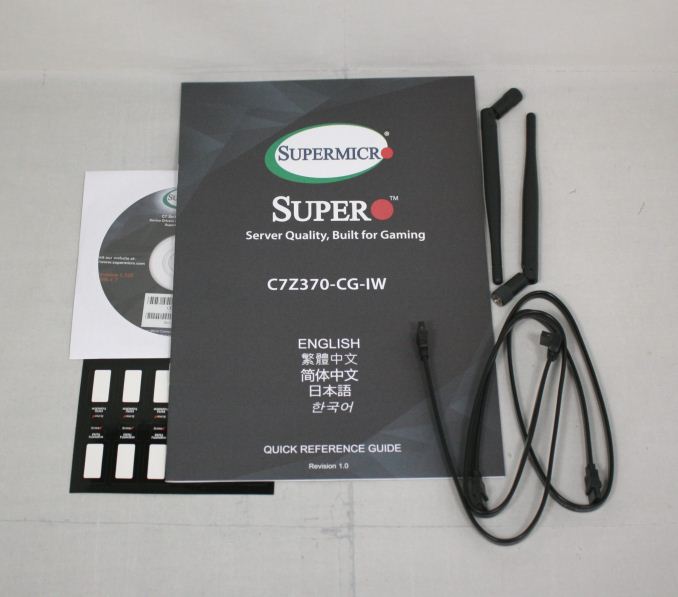