The ASRock Z390 Phantom Gaming-ITX/ac is a mini-ITX motherboard representing its new gaming brand. The Phantom Gaming series made its debut on the Z390 chipset and directly replaces the previous Fatal1ty branding. ASRock has recently just introduced a range of new AMD based graphics cards and even DDR4 memory to the Phantom Gaming range. This gives users the opportunity to kit out a full system with matching components.

Possibly the Z390 Phantom Gaming-ITX/ac's strongest attribute is in the pricing as it has an MSRP of just $190 which with all the features on offer, puts some of the other ATX sized Z390 boards on notice. There are a lot of features on offer and it looks to be one of the most advantageous mini-ITX boards on the market in recent times.

As it stands, the Z390 Phantom Gaming-ITX/ac is the only Z390 motherboard to include a rear panel Thunderbolt 3 USB Type-C port which makes this mini-ITX model stand out from a stacked model list of over 50+ Z390 motherboards. Some of the main features on the ASRock Z390 Phantom Gaming-ITX/ac's include dual M.2 ports, an Intel 9560 802.11ac MU-MIMO Wi-Fi adapter, and a single HDMI 2.0 video output on the rear panel. Other prominent features include dual channel DDR4-4500 memory support with up to a maximum of 32 GB over two memory slots. Some vendors have updated their Z390 motherboards QVL memory support lists to support the Samsung 32 GB UDIMMs, but the Phantom Gaming-ITX/ac as it currently stands isn’t one of them at the time of writing. 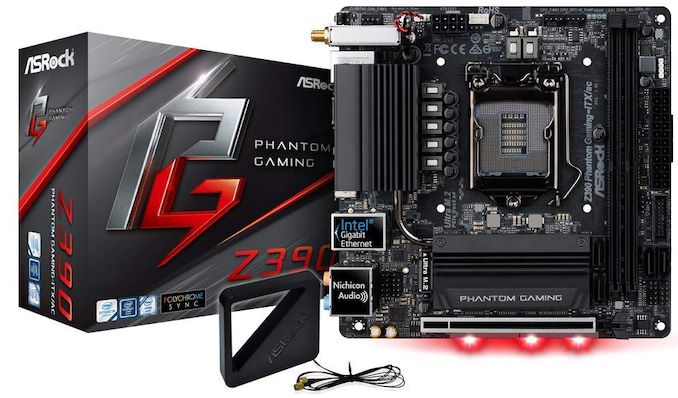 On the aesthetics of the Z390 Phantom Gaming-ITX/ac, ASRock keeps it simple with an all-black PCB and black metallic power delivery heatsink which extends around and across the M.2 slot and Z390 chipset heatsink; this is done using a 2 oz copper heat pipe. Lovers of RGB can customize the integrated LEDs at the bottom of the board and for users looking to expand, there’s an addressable and standard RGB header too. An exclamation point of how small mini-ITX is evident with just one Steel Slot clad full-length PCIe 3.0 x16 slot. Just above this is an M.2 slot which benefits from a heatsink. A second M.2 slot is located on the rear of the PCB, with the rest of the available storage options consisting of four SATA ports.

ASRock hasn’t just relied on its premium features to make things appealing to users, but the rear panel has plenty to touch on. There’s 3.5 mm audio inputs and an S/PDIF optical output due to using a Realtek ALC1220 HD audio codec and the Z390 Phantom Gaming-ITX/ac also offers a total of five USB 3.1 G2 ports: four Type-A and one Type-C Thunderbolt 3 port. 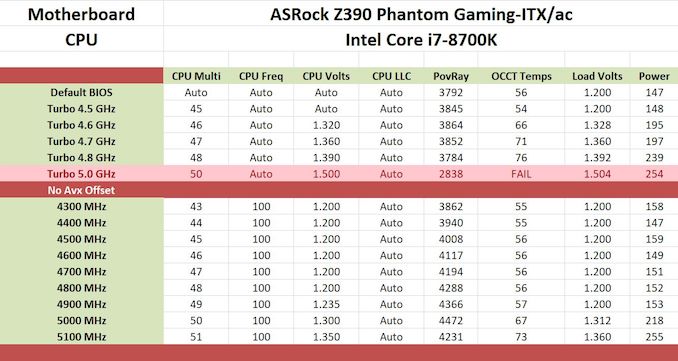 In our testing, the ASRock Z390 Phantom Gaming-ITX/ac performed consistently well and it trades blows with the similarly priced ASUS ROG Strix Z390-I Gaming at every avenue explored. Power consumption figures at idle within Windows 10 didn’t prove too efficient, but at full load, the Phantom Gaming ITX sized board did do better. Booting times in our non-UEFI POST time test were great and our gaming testing showed no anomalies.

With our overclock testing, the Z390 Phantom Gaming-ITX/ac excelled and aside from a very overzealous 5 GHz preset overclocking profile that plied our chip with too much voltage (1.50 V) on the VCore, everything seemed good. ASRock has intelligently set the firmware to correlate custom CPU VCore voltage adjustments with setting load line calibration or LLC to level 1. This means little to no VDroop experienced with just a slight variation to set and load voltages at 5.0 GHz and beyond.

The ASRock Z390 Phantom Gaming-ITX/ac is one of six boards from its new Phantom Gaming series, with this also being the smallest of the line-up. Unlike the other vendors on Z390, ASRock has two mini-ITX motherboards with the other coming in a non-gaming branded and less premium form, the ASRock Z390M-ITX/ac ($150). Currently in retail channels with a price tag of $190, the ASRock Z390 Phantom Gaming-ITX/ac offers lots of useful features and quality components at a more than acceptable price point. This is certainly attributed to the inclusion of a Thunderbolt 3 USB Type-C connector on the rear panel which makes this model a rarity; rare is appealing.

The ASRock Z390 Phantom Gaming-ITX/ac is the company's highest quality Z390 mini-ITX motherboards. On the front of the board is a single ASRock Steel Slot full-length PCIe 3.0 x16 slot, with the board also encompassing two PCIe 3.0 x4 M.2 slots. The front slot comes with a preattached M.2 heatsink. The audio is handled by a Realtek ALC1220 HD audio codec, while the networking capabilities are taken care of with by an Intel I219-V GbE NIC and Intel 9560 802.11ac MU-MIMO Wi-Fi adapter; this also allows users to use Bluetooth 5.0 devices.

ASRock has put a lot of emphasis on performance as it's using as much of the Z390 chipsets native USB 3.1 G2 as possible on the rear panel. This translates to four Type-A and a single Thunderbolt 3 Type-C present. This model opts for the more widely used Intel I219-V GbE NIC instead of the Realtek 2.5 GbE RTL8125AG gaming focused NIC that comes on other Phantom Gaming branded boards. The ASRock Z390 Phantom Gaming-ITX/ac model also uses an HDMI 2.0, a DisplayPort 1.2, with the Thunderbolt 3 Type-C port all offering users up to 4K Ultra HD support with supported processors featuring integrated graphics. 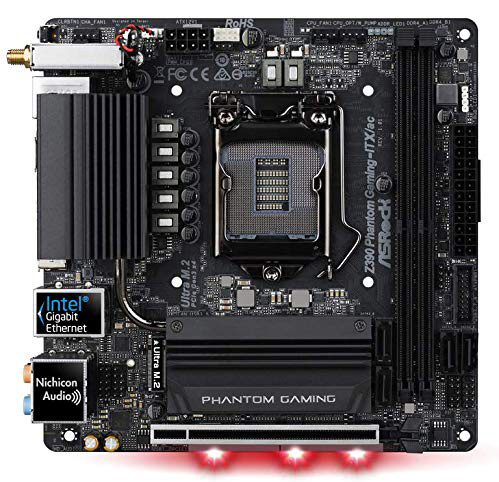 The ASRock Z390 Phantom Gaming-ITX/ac uses a very simplistic black theme with an all-black PCB and black metallic heatsinks. For the heatsink, there are two elements that are connected with a plated copper heat pipe which not only cools the CPU VCore section of the power delivery but also the Z390 chipset too. What makes it interesting is ASRock has incorporated an M.2 heatsink into the chipset part which is a good use of space. 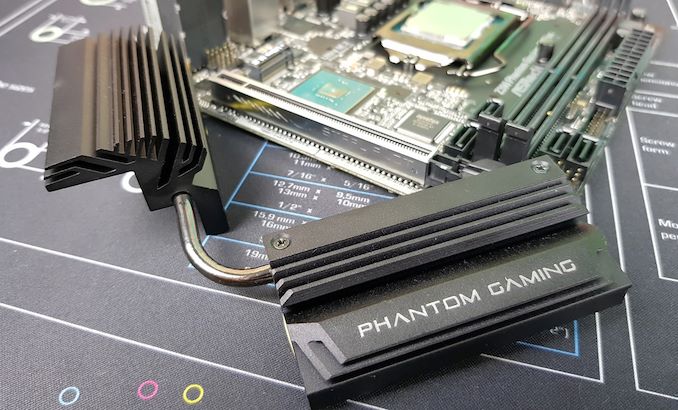 The Phantom Gaming branding is embossed onto the chipset section of the heatsink with silver lettering which has a classic looking contrast. Users looking for RGB can customize the three LEDs which are integrated at the bottom of the board on the rear. The Z390 Phantom Gaming-ITX/ac does have two RGB headers with one addressable and one standard header which gets support from ASRock’s Polychrome RGB software. 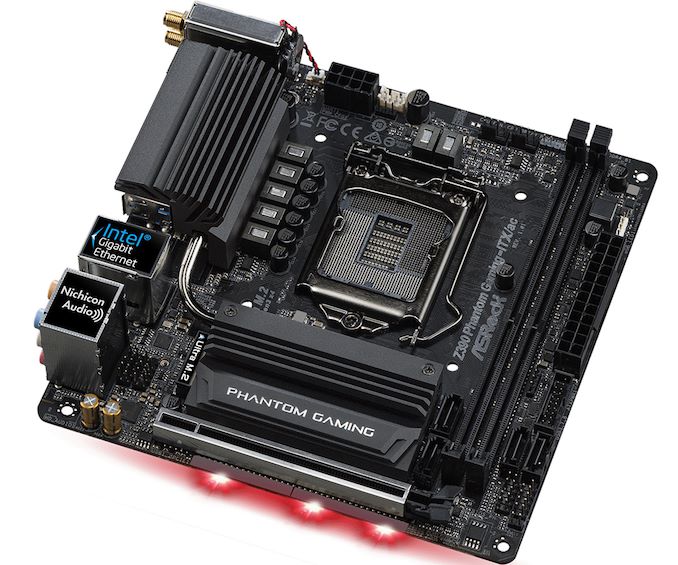 Storage wise there’s four straight-angled SATA ports with two located on either side of the RAM slots, who of which are just inside the DRAM slots which makes them difficult to access. Also, these ports have the heatsink right next to it, which means removing locking cables in this position is going to be very difficult indeed. In addition are two M.2 slots which both offer support for PCIe 3.0 x4 and SATA drives. The main slot is located just above the single full-length PCIe 3.0 x16 slot which can be accessed by removing the integrated M.2 heatsink. The second slot is located on the back of the board and both M.2 slots on the Z390 Phantom Gaming-ITX/ac support up to M.2 2280 drives. Using a SATA based drive in the primary M.2 slot on the front will disable the SATA_2 port. 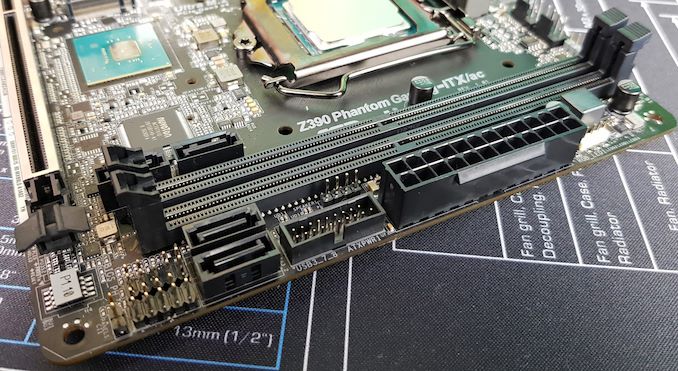 One of the big improvements with the introduction of the Z390 chipset over the Z370 is memory compatibility, and the Z390 Phantom Gaming-ITX/ac benefits from this. The board has support for DDR4-4500 memory with two slots supporting up to a maximum of 32 GB. On the cooling front is a trio of 4-pin headers with them split into a CPU fan header, pump/AIO header and a single system fan header. 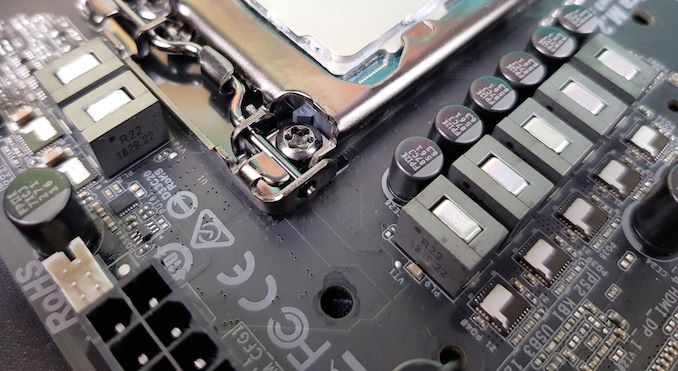 The power delivery on the ASRock Z390 Phantom Gaming-ITX/ac is one of the simplest and robust for a mini-ITX motherboard I’ve seen. Running as the central hub is an Intersil ISL69138 7-channel PWM controller which is operating in a 5+2 configuration. The CPU VCore section consists of five high-quality Intersil Smart Power ISL99227 power stages with direct metal contact which are rated at large 60 A. The other two are for the iGPU with two more ISL99227 power stages; the SoC/iGPU section of the power delivery doesn’t include a heatsink. Accompanying the power delivery is seven 60 A inductors and an array of 12K capacitors. Feeding power into the CPU from the power supply is a single 8-pin 12 V ATX power input. 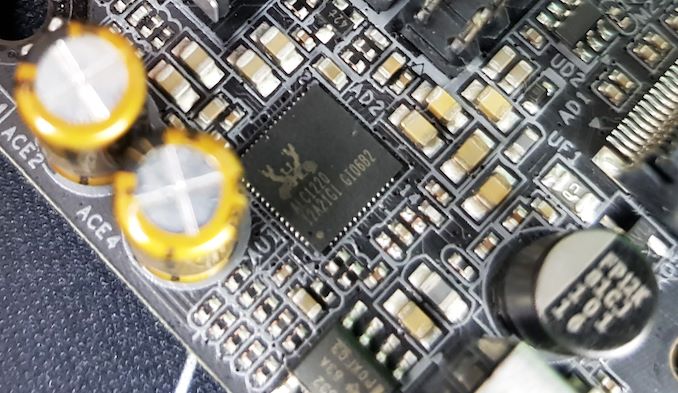 The Realtek ALC1220 HD audio codec on the Z390 Phantom Gaming-ITX/ac is flanked by a pair of gold Nichicon Japanese audio capacitors. On the PC, there is some physical separation from the audio PCB to the rest of the motherboard, but the ALC1220 codec itself doesn’t feature any isolation or EMI shielding.

Connections on the rear panel are diversified with four USB 3.1 G2 Type-A ports, two USB 3.1 G1 and desirable Thunderbolt 3 Type-C port; the Thunderbolt 3 port supports up to 4K resolution. Also present is a LAN port controlled by an Intel I219-V 1 NIC and there are two antenna adapters for the Intel 9560 802.11ac Wi-Fi adapter. Located on the rear is a handy clear CMOS button and users of legacy keyboards and mice can use the PS/2 combo port. Finishing off the Z390 Phantom Gaming-ITX/ac’s rear panel is five 3.5 mm color coded audio jacks and a S/PDIF optical output which is powered by a Realtek ALC1220 HD audio codec. 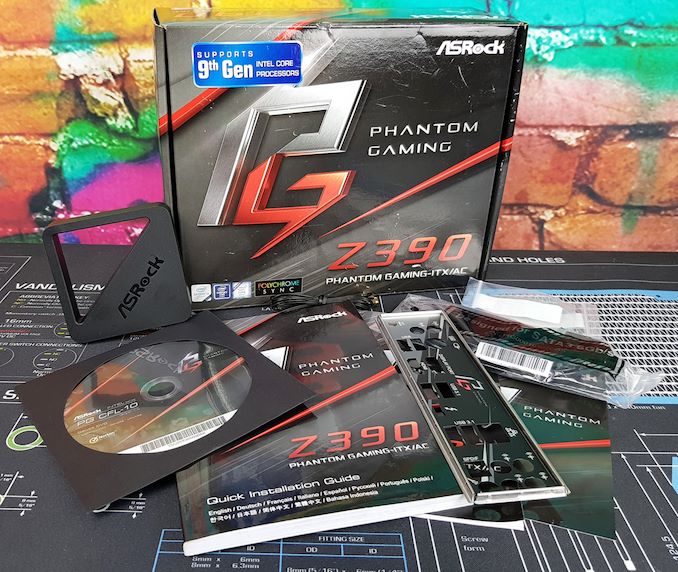 Inside of the packaging, ASRock has included four SATA cables with two featuring right-angled connectors and the remaining straight. Also included are two M.2 installation screws and an ASRock 2T2R 802.11ac adapter for use with the Wi-Fi. A driver installation disc, a software setup guide, and an installation manual make up the rest of the package.