Another key series in ASRock's stack returns, which targets more of the entry-level to mid-range with a 'lighter' aesthetic. The ASRock Z690 Steel Legend WIFI 6E (DDR4) and the Z690 Steel Legend (DDR4) is another segmented product range differentiating its models between DDR5 and DDR4 memory compatibility, with the Steel Legend currently only available with support for DDR4. The ASRock Steel Legend series blends a black and urban camouflage printed PCB, with white and silver heatsinks, including elements of RGB LED's within the rear panel cover, chipset heatsink, and the Steel Legend logo on the right-hand side of the board. 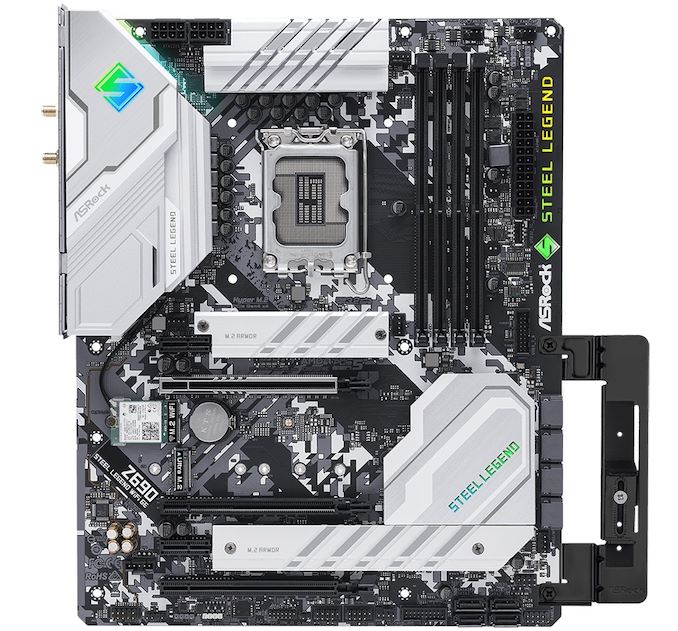 On the rear panel, both models include one USB 3.2 G2 Type-C, one USB 3.2 G2 Type-A, and four USB 3.2 G1 Type-A ports. For users looking for USB 3.2 G2x2 Type-C support, ASRock includes one front panel header for this. Also on the rear panel is an HDMI 2.1 and DisplayPort 1.4 video output pairing, while wired networking is handled by a Realtek RTL8125BG 2.5 GbE controller. For onboard audio, ASRock is using a Realtek ALC1220 HD audio codec which powers five 3.5 mm audio jacks and S/PDIF optical output, while a PS/2 combo port and BIOS Flashback button finish off a modest rear panel offering.