Corsair has a long and illustrious history as an innovator in the memory market. For many years the only recognizable brand of enthusiast memory was Corsair. That has changed in recent years, but that is the reason many computer enthusiasts are so loyal to the Corsair brand.

Corsair is the most widely recognized brand of enthusiast memory in the world. It is also widely distributed, making the Corsair brand easy to find just about anywhere you might be located. Corsair has been manufacturing high-speed memory since 1994, and as a result the company has supplier relationships with many computer manufacturers. Corsair maintains an extensive line of memory, ranging from their Value Select brand of low-cost memory to their top-end XMS line.

XMS2 Dominator is Corsair's name for a new memory series. It describes some unique innovations in the PCB and memory cooling. 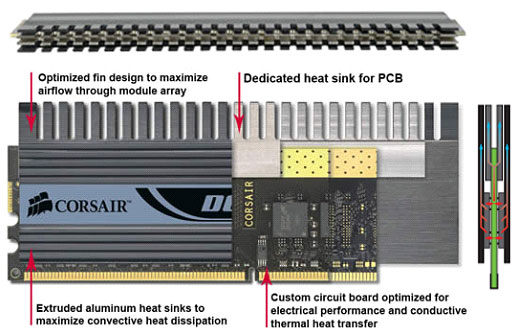 As you can see from the diagram Dominator uses two paths for memory cooling:
In addition cooling can be further enhanced with a Dominator Airflow fan. This super-efficient fan is designed to attach to the memory clips and float over the Dominator memory modules. 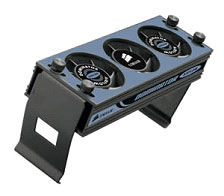 The Corsair fan design is very clever and is a much more secure solution for fan cooling than a precarious large fan laid over the top of memory modules. If you seriously overclock your memory then you should definitely consider adding this 3-fan option to your system, no matter what memory you use.

Corsair has made Dominator cooling widely available in their high-end XMS line. You can find a Dominator version of almost any Corsair Super Performance memory.


NVIDIA and Corsair have jointly developed an open standard for memory profiles in the SPD (Serial Presence Detect) called EPP. It was first unveiled at the launch of the NVIDIA 500 family of chipsets and has been expanded since. The SPD profiles are called EPP (Enhanced Performance Profiles) and they are a standard feature of all Dominator memory modules. This allows easier setting of aggressive overclocking timings if the motherboard supports EPP profiles.

Corsair supplies Dominator DDR2-1111 in the largest memory package you will likely see. The memory ships in a box about the size of a package for a video card. The box contains a matched pair of 1GB Dominator DIMMs and a Dominator Airflow fan unit. 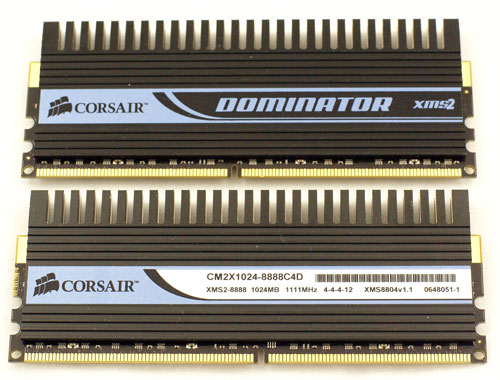 The PC2-8888 Dominator DIMMs are built with specially binned Micron D DDR2 memory chips. This is certainly not a surprise since OCZ Flex XLC and all the other recently tested top-of-the-line memory has used the same memory chips. 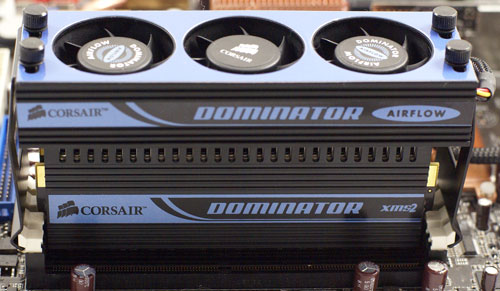 Once installed you have to agree the complete Dominator kit has a unique look. The Airflow fan kit, with quiet, down-facing fans, appears to do a good job of keeping the DIMM area cooler. This certainly contributes to better overclocking performance. We did not measure the temperature drop, as we're not sure how relevant the heatsink temp is to performance, but the finned composite heatsinks are noticeably cooler to the touch when overclocking with the Airflow fan kit attached.


Corsair Dominator fits the same DDR2 slots as past DDR2 memory, but the dual-path heat exchanger makes for a much taller DIMM. Add the Airflow fan on top and you have a tall memory area. However, while the volume is larger, a Dominator setup still has no problem fitting in a standard case. Since the Airflow fan occupies the same area as the memory module area, fan space requirements are actually less than a large fan resting on top of the DIMMs. We have no problem at all using a complete Dominator kit with the large Tuniq 120 air cooling system.