So how attractive is HP's Moonshot 1500 system chassis? HP claims that for the right workloads, these systems will be 77% less costly, consume 89% less energy, take 80% less space and be 97% less complex.  HP bases this on a comparison of one of its own proprietary 47U (non-industry standard thus) Moonshot racks with 5 racks of traditional 1U, 2 socket servers. That is a server form factor which was very popular in the beginning of this century. For some reason, some of the PR people at HP have missed the launch of HP's blade servers in 2002, have never heard about the Twin(²) designs of Supermicro and also conveniently forgot about the fact that we now fill up our 2U and 3U boxes with memory, install a hypervisor on top of it and run a few tens of virtual machines upon it.

We have serious doubts that the current implementation will offer a significantly higher performance per watt ratio than the current low power server options, even when running the "right" workloads such as web front serving, content delivery (mostly photos and images) and memcached servers. Our doubts are based upon several datapoints.

Firstly, the performance per watt of the current Atom S1260. At 2GHz, it is clocked 7.5% higher than the Atom N2800 1.86GHz we tested. That clockspeed advantage is about the only advantage it has over the N2800, so we expect it to perform up to 7.5% better but not more. The advantage of using 1333 MHz instead of 1066 MHz DDR3 is probably very small and partly negated by the fact that ECC takes a bit of performance away. Therefore, we can get an idea how the individual Moonshot server Catridge will perform.

Take a look at the compression benchmark below. Compression is a low IPC workload that's sensitive to memory parallelism and latency. The instruction mix is a bit different, but this kind of workload is still somewhat similar to many server workloads. 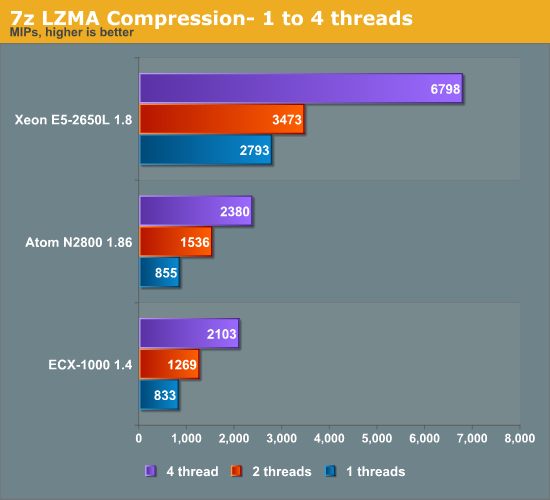 You can easily calculate where the Atom S1260 would land. Add about 8% to the scores of the Atom N2800. Extrapolating these number, we may expect the Atom S1260 to score 2570 at the most. That is about 22% better than the ARM Cortex A9 based quad core of Calxeda at 1.4GHz. Single threaded performance would be less than 10% better.

If you consider the TDP of this chip, the age of the Atom core is really showing. The heavily integrated ECX-1000 SoC - 4 cores, management, networking and IO controllers - needs about 5W at the most (at 1.4GHz, 3.8W at 1.1GHz). The Atom S1260 needs 8.5W and that does not include its network and management chips. So we estimate that the current Atom S1260 probably needs twice as much power to offer the 20% performance advantage illustrated above.