A Look at Altera's OpenCL SDK for FPGAs

We go over how OpenCL kernels are compiled to FPGAs, and discuss some of the unique advantages of Altera's implementation over, say, GPUs.

Before getting into FPGAs, let us first look at how OpenCL kernels are compiled to GPUs. I am going to oversimplify things here so the discussion is not totally accurate, and details vary considerably across GPUs, but the objective is to give you a good idea of the concepts.

Now let us look at Altera's OpenCL compiler.  Altera's OpenCL compiler reconfigures the FPGA so that it becomes a custom processor designed for computing your kernel. For example, in our vector add example, each work-item does 2 loads (one from vector A, one from vector B), one floating-point add and one store (vector C). Then, Altera's compiler will generate 2 load units, 1 adder and 1 store unit. 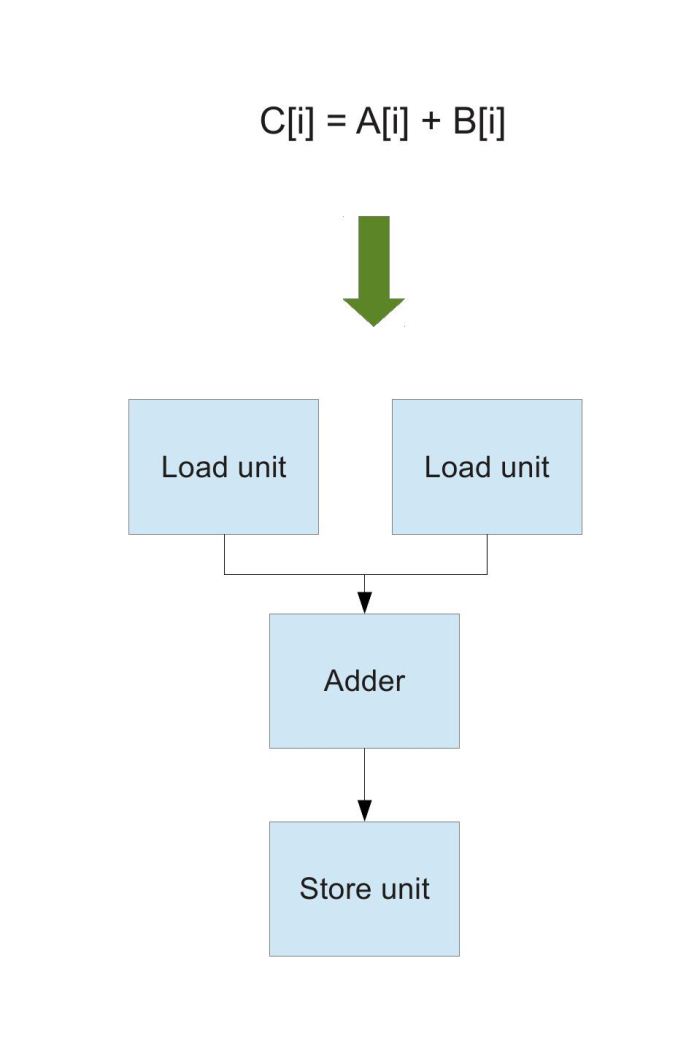 Behind the scenes, Altera's compiler is currently generating Verilog but this is an implementation detail that can change, and the programmer doesn't need to concern herself with it. As discussed earlier, Altera's OpenCL implementation tries to be smart and tries to avoid generating any unnecessary units. For example, if your kernel does not use floating point arithmetic, then no floating-point logic is generated. Further, let us say your kernel has operations such as (a*b*c + d*e). Such operations would map to multiple instructions in a CPU or a GPU but in an FPGA, the compiler may generate an ALU that performs this operation in a single step.

One potential weakness of FPGAs is that the compilation of OpenCL kernels to FPGAs can take time and so Altera primarily provides an offline compiler. Compiling OpenCL kernels for CPUs or GPUs typically happens in the order of hundreds of milliseconds to seconds on most modern machines. However, compilation time for FPGAs can be significantly longer and can often be in hours instead of seconds.

UPDATE: See comment from Kishonti (makers of tools like CLBenchmark, which we use ourselves for GPGPU testing) where they say that the compile time was indeed in hours for their tests. I can see that this can be an issue. On CPUs and GPUs, we are used to fast compile times which allows for quick iterations of testing and tuning kernels. On FPGAs, the development time can be longer due to compilation time bottleneck.

Another interesting aspect is how OpenCL's parallelism is mapped to an FPGA.  In computer architecture, you can obtain parallelism in at least two ways:  (a) Resource replication, obtained by replication of the same resource (such as a CPU core or a GPU compute unit) multiple times (b) pipeline parallelism, which relies on different types of functional units acting in parallel on different steps. For example, load/store units may act in parallel with ALUs. 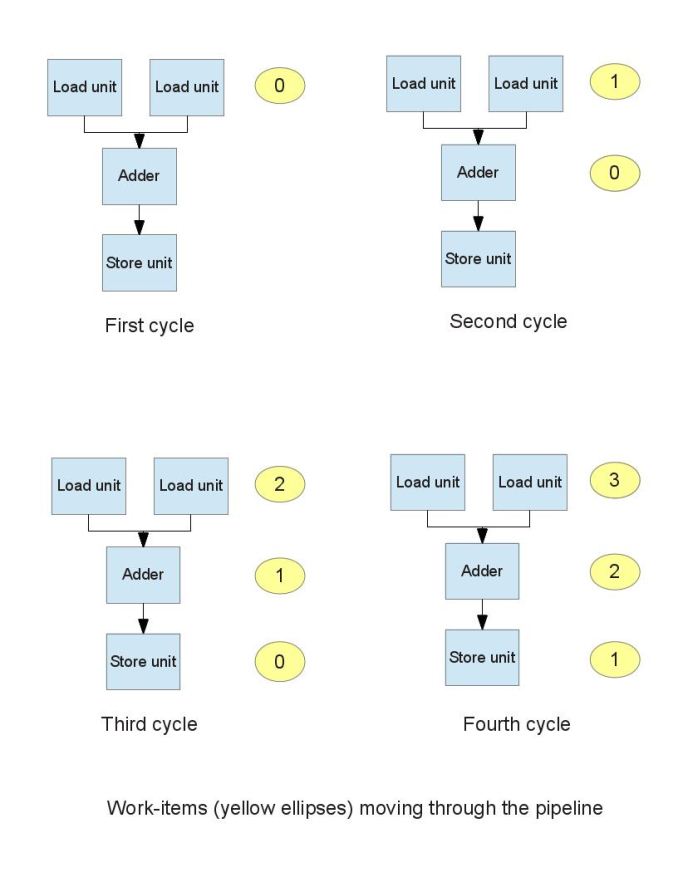 Our example consists of a very simple problem and upto 3 work-items were executing in parallel in the pipeline. For more complex kernels, Altera's SDK will generate much deeper pipelines with many more work-items active in the pipeline at the same time. In a general purpose processor, the number of various functional units, such as ALUs and load/store units,  as well as the functionality of each unit and the connection structure between these units is fixed at design time of the processor. This fixed structure may not be optimal for all applications. However, in an FPGA the pipeline structure and the number and types of functional units present is customized to suit your application.

If the pipeline generated for your application is simple and does not eat all the resources on the FPGA, then you can instruct Altera's SDK to also attempt to create multiple copies of the pipeline. However, instead of outright replication of the pipeline, in many cases a better option is to merge multiple work-items and effectively vectorize a problem. For example, in our kernel, we can modify the kernel so that each work-item computes a vector of 8 elements. Vectorization is somewhat more efficient but not always applicable. Altera's SDK allows you to control whether you want to vectorize or replicate your pipeline.

To summarize, Altera's SDK places pipeline parallelism at the forefront and can generate deep, application-specific pipelines. Resource replication is controlled by the programmer and depending on the problem can be done either by implementing a wider pipeline through vectorization or through outright pipeline replication.

One of the bottlenecks in many high performance applications is that the data to be processed comes from an external I/O device. For example, input data might be  a large file read from an SSD, or streaming data from a video camera, or data from network port. Traditionally this data was transferred to a buffer in system RAM by the external I/O device, and then copied by the CPU to another temporary buffer in system RAM and finally copied to the accelerator/co-processor over PCIe. Obviously,  this multiple copying of data is wasteful and can be a big bottleneck.

FPGAs can communicate to external world (PCIe, network connections, storage devices etc.) through transceivers. Different FPGA products have different number of transceivers with different datarates. Currently, the most impressive offering from Altera is the Stratix V GX with upto 66 14.1 Gbps (bidirectional) transceivers. The number of transceivers actually exposed by a given FPGA board depends upon both the FPGA used as well as the board design. Connecting an external I/O device may require additional logic and Altera and partners will readily sell you solutions for a number of standard interfaces. The high bandwidth I/O makes the FPGA ideal for streaming/filtering type applications.

Unfortunately, the OpenCL standard does not really cover this type of scenario well and so Altera is working on providing custom extensions to OpenCL that allow you to use external I/O devices as inputs or outputs of OpenCL kernels for streaming applications.  Altera tells me this is similar to the pipes functionality introduced in the provisional OpenCL 2.0 spec.

It is worth mentioning that Nvidia provides a competing solution called GPUDirect for CUDA. As of CUDA 5.0,  it is possible for external I/O devices such as other Nvidia GPUs, SSDs and network cards to read/write the GPU memory directly over PCIe bus without going through the host.  However, the net bandwidth is limited to PCIe 3.0 x16 currently, which works out to about 16 GB/s in each direction which is much lower than the peak theoretically obtainable on, say, the Stratix V GX FPGA (~116 GB/s in each direction).  In practice, Nvidia's GPUDirect solution is sufficient for many applications but there are definitely some applications where the FPGA's bandwidth advantage will be extremely important.  Another limitation of Nvidia's GPUDirect is that it is currently only available in CUDA and not in OpenCL.