Both Samsung Semiconductor and TSMC delivered their first 20nm products in Q3 2014, but they don't represent the same jump in efficiency. Samsung's 28nm HKMG process varied a lot from TSMC's 28nm HPM process. While Samsung initially had a process lead with their gate-first approach when introducing 32nm HKMG and subsequently the 28nm shrink, TSMC went the route of gate-last approach. The advantage of the gate-last approach is that it allows for lower variance in the manufacturing process and being able to allow for better power characteristics. We've seen this as TSMC introduced the highly optimized HPM process in mobile. Qualcomm has been the biggest beneficiary as they've taken full advantage of this process jump with the Snapdragon 800 series as they moved from 28nm LP in previous SoCs.

In practical terms, Samsung is brought back on even terms with TSMC in terms of theoretical power consumption. In fact, 28nm HPM still has the same nominal transistor voltage as Samsung's new 20nm process.

Luckily Samsung provides useful power modeling values as part of the new Intelligent Power Allocation driver for the 5422 and 5430 so we can get a rough theoretical apples-to-apples comparison as to what their 20nm process brings over the 28nm one used in their previous SoCs. 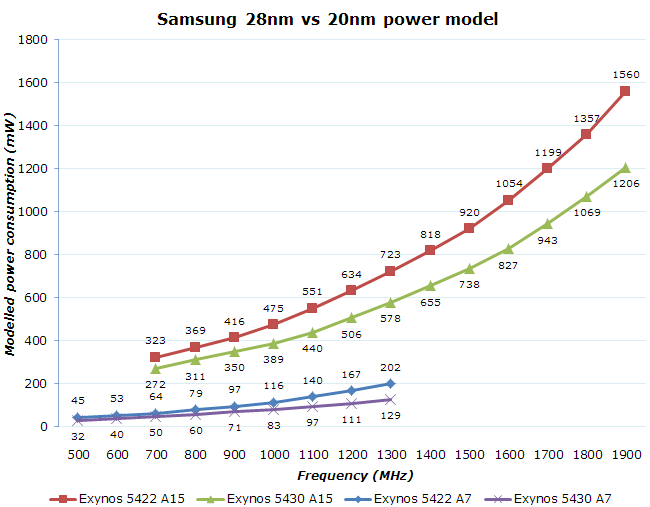 I took the median chip bin for both SoCs to extract the voltage tables in the comparison and used the P=C*f*V² formula to compute the theoretical power figure, just as Samsung does in their IPA driver for the power allocation figures. The C coefficient values are also provided by the platform tables.

We can see that for the A15 cores, there's an average 24% power reduction over all frequencies, with the top frequencies achieving a good 29% reduction. The A7 cores see the biggest overall voltage drop, averaging around -125mV, resulting in an overall 40% power reduction and even 56% at the top frequency. It's also very likely that Samsung has been tweaking the layout of the cores for either power or die size; we've seen this as the block sizes of the CPUs have varied a lot between the 5410, 5420 and 5422, even though they were on the same process node.

While these figures provide quite a significant power reduction by themselves, they must be put into perspective with what Qualcomm is publishing for their Krait cores. The Snapdragon 805 on a median speed bin at 2.65GHz declares itself with a 965mW power consumption, going down to 57mW at 300MHz. While keeping in mind that these figures ignore L2 cache power consumption as Qualcomm feeds this on a dedicated voltage rail, it still gives us a good representation of how efficient the HPM process is. The highest voltages on the S805 are still lower than the top few frequencies found on both the 5430 and the 5433.

20nm does bring with itself a big improvement in die size. If we take the 5420 as the 28nm comparison part and match it against the 5430, we see a big 45% decrease on the A7 core size, and an even bigger 64% reduction on the A15 core size. The total cluster sizes remain relatively conservative in their scaling while shrinking about 15%; this is due to SRAM in the caches having a lower shrinking factor than pure logic blocks. One must keep in mind that auxiliary logic such as PLLs, bus interfaces, and various other small blocks are part of a CPU cluster and may also impact the effective scalability. Samsung also takes advantage of artificially scaling CPU core sizes to control power consumption, so we might not be looking at an apples-to-apples comparison, especially when considering that the 5430 is employing a newer major IP revision of the CPU cores.

The Mali T628 between the 5420 and the 5430 actually had an increase in die size despite the process shrink, but this is due to a big increase in the cache sizes.

Samsung regards their 20nm node as very short-lived and the 5430 and 5433 look to be the only high volume chips that will be coming out on the process as their attention is focused on shipping 14nm FinFET devices in the next few months. In fact at the Samsung Investor Forum 2014 they announced mass production of a new high-end SoC has already begun mid-November and will be ramping up to full volume in early 2015. I suspect this to be the Exynos 7420 as that is the successor SoC to the 5433.

All in all, the argument that this 20nm chip should be more power efficient than the competitors' 28nm is not completely factual and doesn't seem to hold up in practice. The process still seems young and unoptimized compared to what TSMC offers on 28nm.

Before we get to the performance and power figures, I'm handing things over to Ryan as we take a look at the architectural changes, starting with an analysis of the Cortex A53.