The four displays launching today cover two primary options. For those that want higher refresh rates, Acer and BenQ have TN-based 40-144Hz displays. Both are 27” WQHD displays, so it’s quite probable that they’re using the same panel, perhaps even the same panel that we’ve seen in the ASUS ROG Swift. The two LG displays meanwhile venture out into new territory as far as adaptive refresh rates are concerned. LG has both a smaller 29” and a larger 34” 2560x1080 (UW-UXGA) display, and both sport IPS panels (technically AU Optronics' AHVA, but it's basically the same as IPS).

The other upcoming displays all appear to be using TN panels, though it's possible Samsung might offer PLS. The UE590 appears to be TN for certain, with 170/160 degree viewing angles according to DigitalTrends. The UE850 on the other hand is targeted more at imaging professionals, so PLS might be present; we'll update if we can get any confirmation of panel type.

One of the big benefits with FreeSync is going to be support for multiple video inputs – the G-SYNC displays so far are all limited to a single DisplayPort connection. The LG displays come with DisplayPort, HDMI, and DVI-D inputs (along with audio in/out), and the Acer is similarly equipped. Neither one has any USB ports, though the BenQ does have a built-in USB hub with ports on the side.

Our testing was conducted on the 34UM67, and let me just say that it’s quite the sight sitting on my desk. I’ve been bouncing between the ASUS ROG Swift and Acer XB280HK for the past several months, and both displays have their pros and cons. I like the high resolution of the Acer at times, but I have to admit that my aging eyes often struggle when running it at 4K and I have to resort to DPI scaling (which introduces other problems). The ASUS on the other hand is great with its high refresh rates, and the resolution is more readable without scaling. The big problem with both displays is that they’re TN panels, and having come from using a 30” IPS display for the past eight years that’s a pretty painful compromise.

Plopping the relatively gigantic 34UM67 on my desk is in many ways like seeing a good friend again after a long hiatus. “Dear IPS (AHVA), I’ve missed having you on my desktop. Please don’t leave me again!” For the old and decrepit folks like me, dropping to 2560x1080 on a 34” display also means reading text at 100% zoom is not a problem. But when you’re only a couple feet away, the relatively low DPI does make the pixels much more visible to the naked eye. It even has built-in speakers (though they’re not going to compete with any standalone speakers in terms of audio quality).

The launch price of $649 is pretty impressive; we’ve looked at a few other 21:9 displays in the past, and while the resolution doesn’t match LG’s 34UM95, the price is actually $50 less than the LG 34UM65’s original $699 MSRP (though it’s now being sold at $599). So at most, it looks like putting in the new technology to make a FreeSync display costs $50, and probably less than that. Anyway, we’ll have a full review of the LG 34UM67 in the coming weeks, but for now let’s return to the FreeSync discussion.

It certainly appears that AMD and their partners are serious about pricing FreeSync aggressively, though there aren’t direct comparisons available for some of the models. The least expensive FreeSync displays start at just $449, which matches the least expensive G-SYNC display (AOC G2460PG) on price but with generally better specs (29” 2560x1080 and IPS at 75Hz vs. 24” 1920x1080 TN at 144Hz). Looking at direct comparisons, the Acer XG270HU and BenQ XL2730Z are WQHD 144Hz panels, which pits them against the $759 ASUS ROG Swift that we recently reviewed, giving FreeSync a $160 to $260 advantage. As AMD puts it, that’s almost enough for another GPU (depending on which Radeon you’re using, of course). 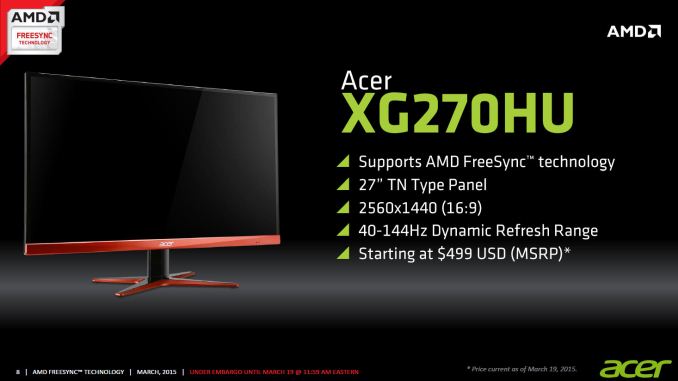 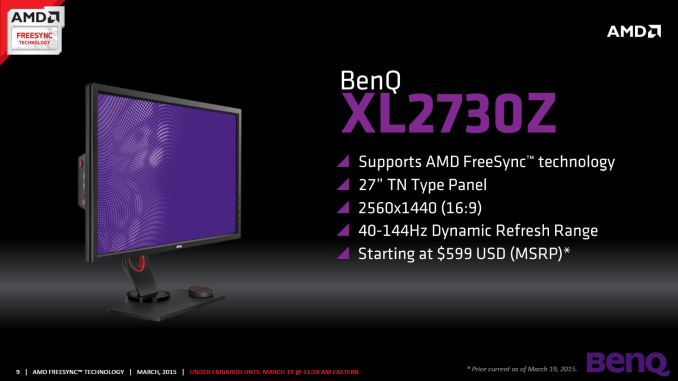 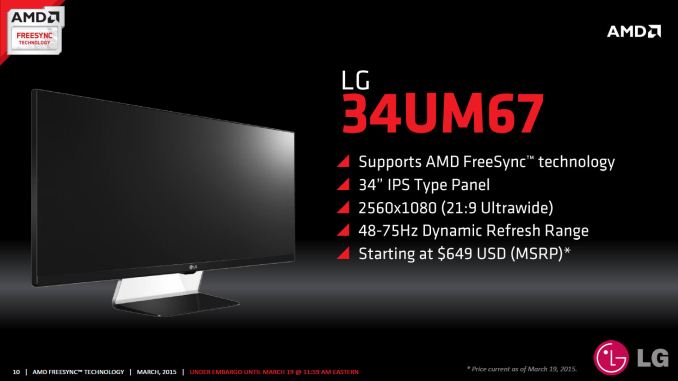 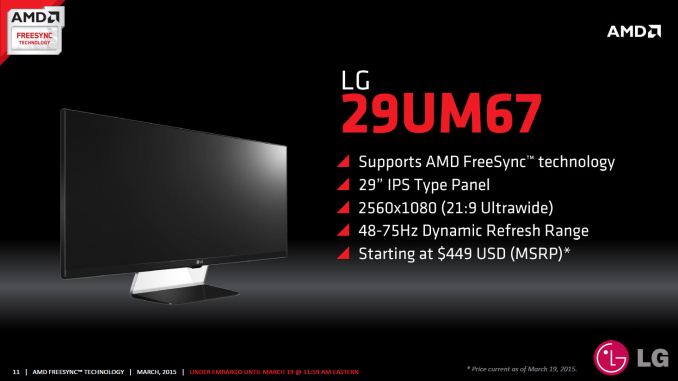 Based on pricing alone, FreeSync looks poised to give G-SYNC some much needed competition. And it’s not just about the price, as there are other advantages to FreeSync that we’ll cover more on the next page. But for a moment let’s focus just on the AMD FreeSync vs. NVIDIA G-SYNC ecosystems.

Right now NVIDIA enjoys a performance advantage over AMD in terms of GPUs, and along with that they currently carry a price premium, particularly at the high end. While the R9 290X and GTX 970 are pretty evenly matched, the GTX 980 tends to lead by a decent amount in most games. Any users willing to spend $200 extra per GPU to buy a GTX 980 instead of an R9 290X might also be willing to pay $200 more for a G-SYNC compatible display. After all, it’s the only game in town for NVIDIA users right now.

AMD and other companies can support FreeSync, but until – unless! – NVIDIA supports the standard, users will be forced to choose between AMD + FreeSync or NVIDIA + G-SYNC. That’s unfortunate for any users that routinely switch between AMD and NVIDIA GPUs, though the number of people outside of hardware reviewers that regularly go back and forth is miniscule. Ideally we’d see one standard win out and the other fade away (i.e. Betamax, HD-DVD, etc.), but with a one year lead and plenty of money invested it’s unlikely NVIDIA will abandon G-SYNC any time soon.

Prices meanwhile are bound to change, as up to now there has been no competition for NVIDIA’s G-SYNC monitors. With FreeSync finally available, we expect prices for G-SYNC displays will start to come down, and in fact we’re already seeing $40-$125 off the original MSRP for most of the G-SYNC displays. Will that be enough to keep NVIDIA’s proprietary G-SYNC technology viable? Most likely, as both FreeSync and G-SYNC are gamer focused more than anything; if a gamer prefers NVIDIA, FreeSync isn’t likely to get them to switch sides. But if you don’t have any GPU preference, you’re in the market for a new gaming PC, and you’re planning on buying a new monitor to go with it, R9 290X + FreeSync could save a couple hundred dollars compared to GTX 970 + G-SYNC.

There's something else to consider with the above list of monitors as well: four currently shipping FreeSync displays exist on the official day of launch, and Samsung alone has five more FreeSync displays scheduled for release in the near future. Eleven FreeSync displays in the near term might not seem like a huge deal, but compare that with G-SYNC: even with a one year lead (more or less), NVIDIA currently only lists six displays with G-SYNC support, and the upcoming Acer XB270HU makes for seven. AMD also claims there will be 20 FreeSync compatible displays shipping by the end of the year. In terms of numbers, then, DP Adaptive Sync (and by extension FreeSync) look to be winning this war.