Today we’ll be looking at Fury cards from both Sapphire and Asus. We’ll kick things off with Sapphire’s card, the Tri-X R9 Fury OC.

As far as Sapphire’s overclock goes, it’s a mild overclock, with the card shipping at 1040MHz for the GPU while the memory remains unchanged at 1Gbps. As we discussed in our R9 Fury X review, Fiji cards so far don’t have much in the way of overclocking headroom, so AMD’s partners have to take it easy on the factory overclocks. Sapphire’s overclock puts the upper-bound of any performance increase at 4% – with the real world gains being smaller – so this factory overclock is on the edge of relevance.

Getting down to the nuts and bolts then, Sapphire’s card is a semi-custom design, meaning Sapphire has paired an AMD reference PCB with a custom cooler. The PCB in question is AMD’s PCB from the R9 Fury X, so there’s little new to report here. The PCB itself measures 7.5” long and features AMD’s 6 phase power design, which is designed to handle well over 300W. For overclockers there is still no voltage control options available for this board design, though as Sapphire has retained AMD’s dual BIOS functionality there’s plenty of opportunity for BIOS modding. 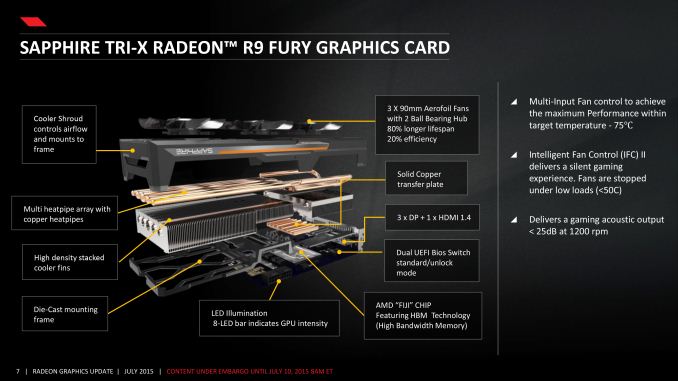 The real story here is Sapphire’s Tri-X cooler, which gets the unenviable job of replacing AMD’s closed loop liquid cooler from the R9 Fury X. With a TBP of 275W Sapphire needs to be able to dissipate quite a bit of heat to keep up with Fiji, which has led to the company using one of their Tri-X coolers. We’ve looked at a few different Tri-X cards over the years, and they have been consistently impressive products. For the Tri-X R9 Fury, Sapphire is aiming for much the same.

Overall the Tri-X cooler used on the Tri-X R9 Fury ends up being quite a large cooler. Measuring a full 12” long it runs the length of the PCB and then some, meanwhile with that much copper and aluminum it’s not a light card either. The end result is that with such a large cooler the card is better defined as a PCB mounted on a cooler than a cooler mounted on a PCB, an amusing juxtaposition from the usual video card. As a result of this Sapphire has gone the extra mile to ensure that the PCB can support the cooler; there are screws in every last mounting hole, there’s a full-sized backplate to further reinforce the card, and the final 4.5” of the cooler that isn’t mounted to the PCB has its own frame to keep that secure as well. 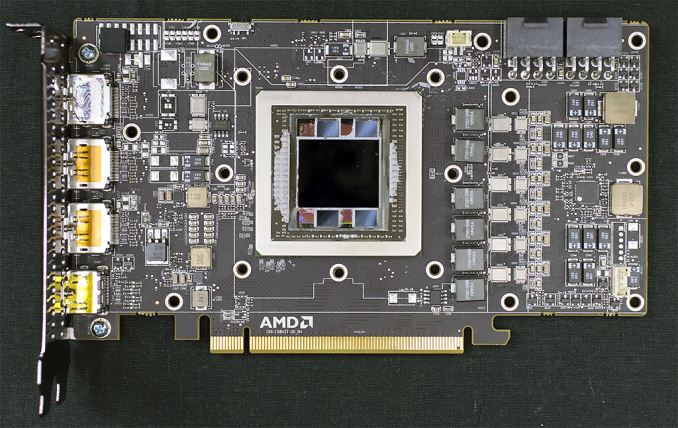 Moving to the top of the card, the Tri-X R9 Fury features three of Sapphire’s 90mm “Aerofoil” fans, the company’s larger, dual ball bearing fans. These fans are capable of moving quite a bit of air even when moving at relatively low speeds, and as a result the overall card noise is kept rather low even under load, as we’ll see in full detail in our benchmark section.

Meanwhile Sapphire has also implemented their version of zero fan speed idle on the Tri-X R9 Fury, dubbed Intelligent Fan Control, which allows the card to turn off its fans entirely when their cooling capacity isn’t needed. With such a large heatsink the Fiji GPU and supporting electronics don’t require active cooling when idling, allowing Sapphire to utilize passive cooling and making the card outright silent at idle. This is a feature a number of manufacturers have picked up on in the last couple of years, and the silent idling this allows is nothing short of amazing. For Sapphire’s implementation on the Tri-X R9 Fury, what we find is that the fans finally get powered up at around 53C, and power down when the temperature falls below 44C.

Helping the cooling effectiveness of the Tri-X quite a bit is the length of the fans and heatsink relative to the length of the PCB. With the 4.5” of overhang, the farthest fan is fully beyond the PCB. That means that all of the air it pushes through the heatsink doesn’t get redirected parallel to the card – as is the case normally for open air cards – but rather the hot air goes straight through the heatsink and past it. For a typical tower case this means that hot air goes straight up towards the case’s exhaust fans, more efficiently directing said hot air outside of the case and preventing it from being recirculated by the card’s fans. While this doesn’t make a night & day difference in cooling performance, it’s a neat improvement that sidesteps the less than ideal airflow situation the ATX form factor results in. 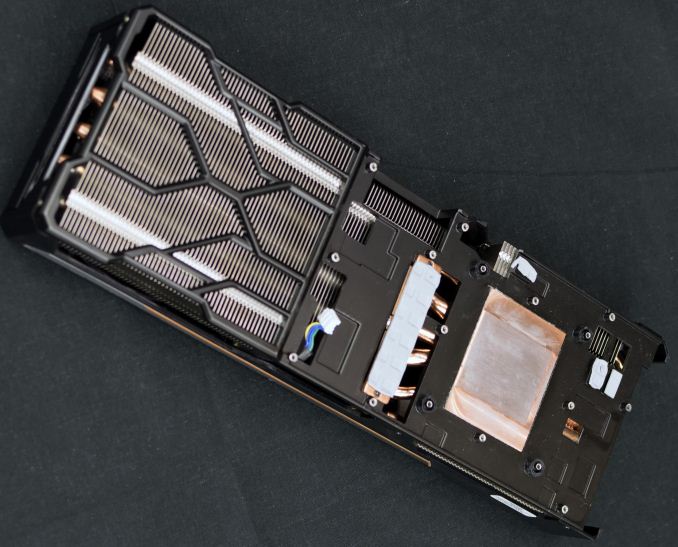 Moving on, let’s take a look at the heatsink itself. The Tri-X’s heatsink runs virtually the entire length of the card, and is subdivided into multiple segments. Connecting these segments are 7 heatpipes, ranging in diameter between 6mm and 10mm. The heatpipes in turn run through both a smaller copper baseplate that covers the VRM MOSFETs, and a larger copper baseplate that covers the Fiji GPU itself. Owners looking to modify the card or otherwise remove the heatsink will want to take note here; we’re told that it’s rather difficult to properly reattach the heatsink to the card due to the need to perfectly line up the heatsink and mate it with the GPU and the HBM stacks.

Moving on, since Sapphire is using AMD’s PCB, this means the Tri-X also inherits the former’s BIOS and lighting features. The dual-BIOS switch is present, and Sapphire ships the card with two different BIOSes. The default BIOS (switch right) uses the standard 300W ASIC power limit and 75C temperature target. Meanwhile the second BIOS (switch left) Increases the power and temperature limits to 350W and 80C respectively, for greater overclocking limits. Note however that this doesn’t change the voltage curve, so Fury cards in general will still be held back by a lack of headroom at stock voltages. As for the PCB’s LEDs, Sapphire has retained those as well, though they default to blue (sapphire) rather than AMD red.

Finally, since this is the AMD PCB, display I/O remains unchanged. This means the Tri-X offers 3x DisplayPorts along with a single HDMI 1.4 port.

Wrapping things up, the OC version we are reviewing today will retail for $569, $20 over AMD’s MSRP. The reference clocked version on the other hand will retail at AMD’s MSRP of $549, the only launch card that will be retailing at this price. Finally, Sapphire tells us that the OC version will be the rarer of the two due to its smaller run, and that the majority of Tri-X R9 Fury cards that will be on sale will be the reference clocked version.