The most difficult part of setting up the NVR system actually turned out to be the wiring and placement of the two cameras relative to the PoE switch. In our evaluation setup, we decided to connect the TeraStation 5200 NVR and the BSL-POE-G2150U uplink to a switch connected directly to a router. The cameras were then connected to the PoE switch. The network components received addresses via DHCP without any problems.

Setting up the NAS

Accessing the IP of the NAS led us to the web administration page (default password being 'password'). The web UI shows that the NVR can also be configured for regular NAS duties. We decided to evaluate it as a dedicated NVR. 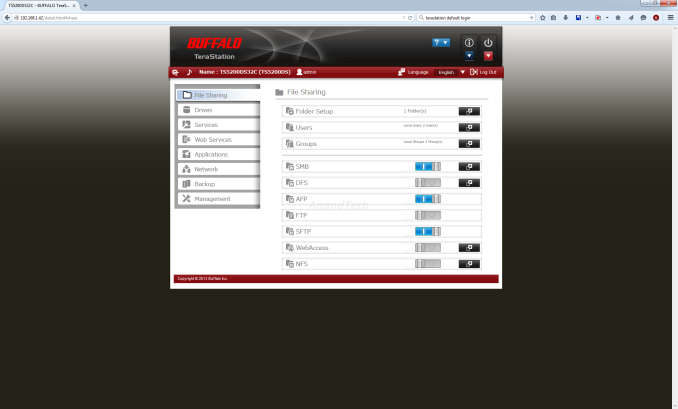 We found that the two WD Red drives were configured in RAID-1 and formatted in XFS, and that a shared folder was already set up. By default, SMB, AFP and SFTP were turned on. We turned off AFP and SFTP as they were not essential for NVR functionality. Under the Applications tab, we also have Surveillance Camera Settings where a particular shared folder could be chosen for recording surveillance videos.

Once the initial setup was done, we could completely forget about the NAS unit. In fact, we never had to access it via its web UI other than to shut down the system at the end of our review process.

The two M1054 cameras could be easily configured stand-alone via their web UI. However, for NVR purposes, it turned out to be easier to configure them from one interface using the Axis Camera Companion PC client. We installed it on a Windows 7 PC and created a MyAxis cloud account. The account is mandatory for the use of the Axis Camera Companion software and important for accessing the cameras on-the-go via the Internet, as we shall see further down.

The Axis Camera Companion (referred to as ACC hereon) automatically searches for all compatible Axis cameras in the network. Our cameras had already been configured via their web UI, and hence, it was necessary to enter the login credentials in order to use them with ACC. 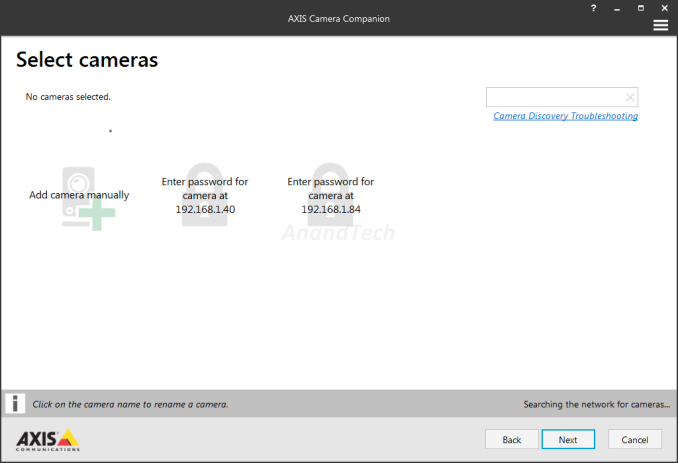 Some Axis cameras also record to local storage, but all of them can record to a network share. ACC allows configuration of the network share by automatically search for available storage devices. It appears that ACC is internally using uPnP for this purpose, as shown in the screenshot below. 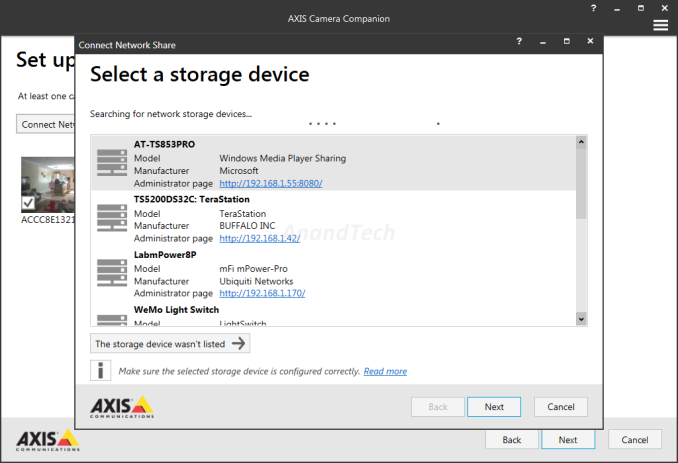 The two cameras were set up to record continuously to the NAS (a 640x400 5fps stream all the time and a 1280x800 15fps stream upon motion detection). It is also possible to configure how long recordings are kept (we chose two weeks, considering that our NVR came with only 1 TB of usable space).

The firmware that initially shipped with the cameras in our review package didn't support remote access, but a firmware update helped enable this option. ACC also allows customization of the streaming parameters / saving locations for the videos etc., as shown in the gallery below.

The Axis Camera Companion also has a mobile component - Android and iOS apps. Upon installation of the app, the user is required to log in with a MyAxis account. A single account can be associated with multiple 'sites'. We configured the two cameras in our review package as 'AT-REVIEW' on the PC, and this automatically appeared when we entered the credentials on the Android app.

The gallery below shows the various important features of the Android app. It must be noted that all these features work over the Internet also (not just the local network). However, that is also dependent on the firmware / model of the cameras themselves. No port forwarding is necessary. It must also be noted that the video recordings are not hosted or held in Axis's servers for access via the Internet.

The features of the app include live viewing (by default, in a matrix form, but also on a per-camera basis), ability to view and locally save segments of the recorded video, alter the quality of the streamed video and also take snapshots. The timeline view of the recorded video is blue in the time span where there is no movement, and red when motion has been detected. This enables easy navigation to timestamps of interest when viewing the recorded video on a mobile device. The viewing of the recorded video entails the IP cameras reading from the network share on the TeraStation 5200 NVR and transmitting it across the network (over the Internet, if necessary).