The PC industry has introduced some remarkably exciting designs over the last five years or so. Some of those designs, such as the thin-bezel laptop, have been adopted by almost all players in the industry. Microsoft has certainly been an innovator in the space as well, and the Surface Pro series has become the baseline for an entire category that did not exist in any volume before their launch. But almost certainly, one of the quirkiest designs was the Surface Book. First launched in 2015, and then succeeded by the Surface Book 2 in 2017, Microsoft is now releasing the third generation of their most powerful notebook computer. 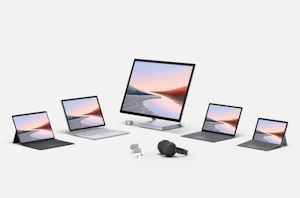 This morning Microsoft is announcing a refresh on a couple more of their Surface products that did not get updated back in October. The Surface Book 3 and Surface...