While I never commented publicly on my experiences with the Sony Xperia Z3v, one of my major concerns with that phone was that the color calibration was frankly shocking for such an expensive phone, and in general the display just wasn’t up to par with expectation. In the time since the Xperia Z3v, the smartphone market has only had more competition in this regard, so even an upper mid-range phone like the Xperia X really has very little margin for error here.

Of course, for those that aren’t familiar with display testing, this may seem a bit out of expectation as in general most reviews will generally state that the Xperia phones have had generally acceptable or excellent displays, but our testing here attempts to avoid relying upon subjective color preferences and rather holds all mobile displays to the same industry-wide standard for content creation on the web. To do this, we use SpectraCal’s CalMAN 5 along with X-Rite’s i1pro2 spectrophotometer and i1Display Pro for accurate contrast, peak luminance, and color readings of all displays against the sRGB gamut with power 2.2 gamma at 200 nits. 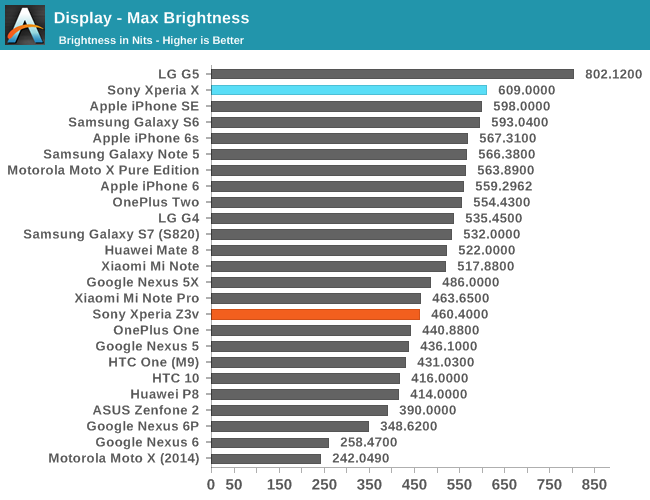 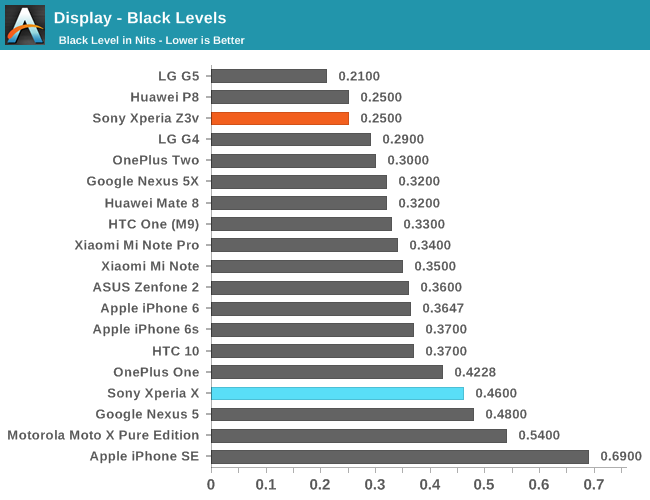 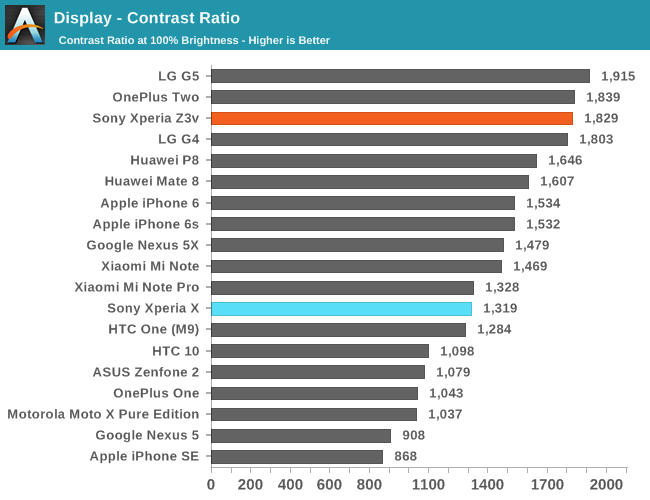 As per usual for our display testing, we can start with our luminance tests, which paint the Xperia X in a fairly positive light. The 5”, 1080p display means that Sony can dedicate more area to actual light transmission rather than control circuitry. The bright backlight and decently high contrast is impressive here, and is actually a great improvement over the rather dim display that I saw on the Z3v. The contrast ratio isn’t anything amazing next to an AMOLED display, but for an LCD it’s quite competitive. Viewing angles subjectively are also quite good with no real visible color shifting other than the purple tint on blacks that occurs due to the dual-domain pixels. The lamination is also executed well on the review unit as the lack of color shifting and good viewing angles makes it look like the display is almost painted onto the glass, although the brightness shifting inherent in LCD will destroy this illusion to some extent. 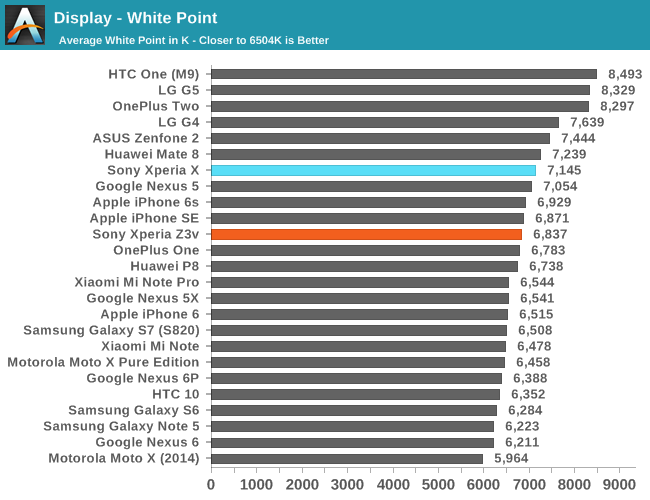 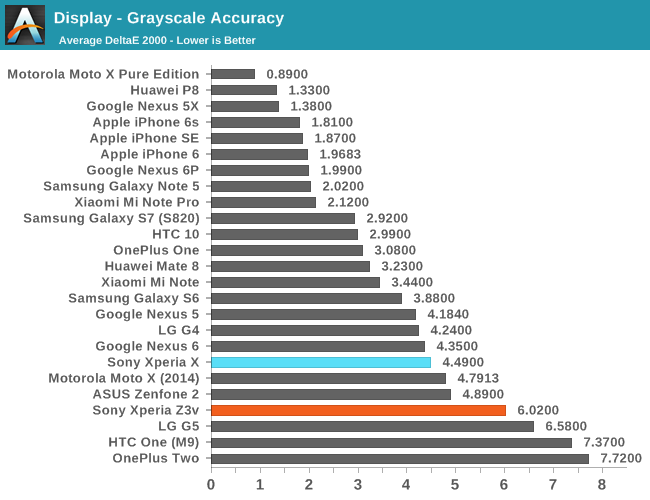 Our next test is really where things start to go wrong to some extent, as the Xperia X out of the box simply doesn’t target grayscale well as the hue just isn’t correct with a noticeable deficiency of green and some blue shifting. This can be resolved with the display settings, but in the case of the Xperia X you just get a generic “color balance” slider for each color primary, and the slider is completely arbitrary. Seeing as how most people don’t have access to a few thousand dollars in display testing equipment, I don’t think this is a valid solution for display calibration the same way that Samsung’s Basic mode or HTC’s sRGB mode is. The error here is really almost unacceptable, and it’s obvious that just correcting this green deficiency is enough to make the average error almost imperceivable, so this is concerning to see. My unit could resolve this issue by setting green to 40, but I don’t have nearly enough sample points to determine whether this is reliable. 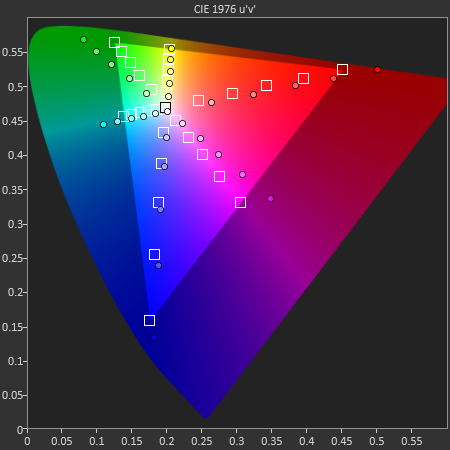 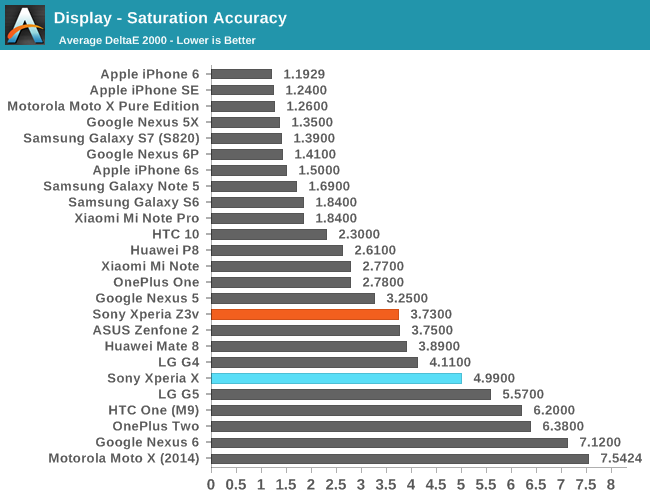 Moving on to our saturations test, it’s evident that Sony is targeting either a different gamut from sRGB or just using the native gamut of the display here as there’s fairly significant color error across the board. This occurs even with X-Reality and Super Vivid mode disabled, so I suspect the situation is even worse with either of those enabled. This wider gamut is quite noticeable as everything looks rather neon compared to something like the Galaxy S7 or HTC 10 with their calibrated modes. Basically the only color that is represented accurately here is yellow, and everything else suffers from significant oversaturation. Thankfully, the saturation curve is linear here so things aren’t as bad as they might be, but these kinds of things are increasingly hard to justify when Xiaomi is shipping excellently calibrated displays in phones that cost hundreds of dollars less. 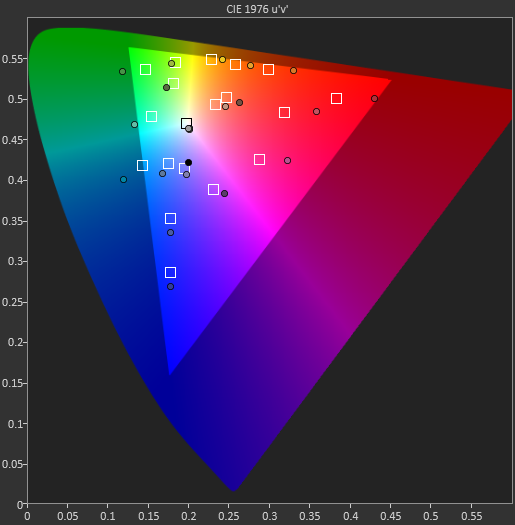 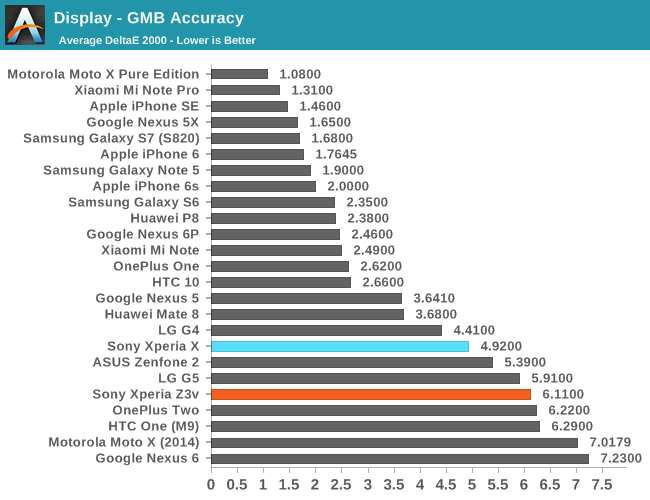 In the GMB ColorChecker test, the same sort of pattern plays out. Due to the hue error in grayscale and incorrect gamut target, color accuracy just isn’t up to par with what we see in other smartphones. As a result, anything that requires color accuracy will struggle here, as the display misses gamut and grayscale targets by a noticeable margin. This alone is enough to make me question whether the Xperia X can justify the asking price, although whether color calibration matters is a subjective matter to some extent.