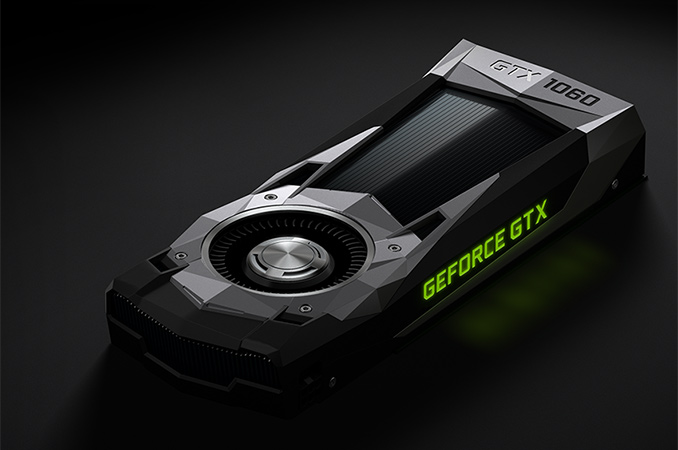 Shipments of discrete graphics processing units (GPUs) are traditionally high in the third quarter as PC makers and retailers gear up for the holiday season and build up stocks of components. Q3 2016 was particularly good for standalone GPUs because both AMD and NVIDIA introduced a number of new products for different market segments from May to August. Sales of discrete graphics cards for desktop PCs hit a two-year high in the third quarter, according to data released by Jon Peddie Research. What is important is that standalone GPUs performed very well despite a shrink of PC sales.

In the third quarter of 2016, the industry sold from 68 million (a 3.9% year-over-year decline, according to IDC) to 68.9 million of PCs (a 5.7% YoY decline according to Gartner). The numbers are up from the second quarter of 2016, but are down from the same period a year ago. A good news is that sales of gaming desktop and notebook PCs are strong, which is why shipments of standalone graphics processors were strong as well. JPR believes that around 34.84% of PCs shipped in Q3 used discrete GPUs. Based on the numbers from IDC and Gartner, we can estimate that this should be between 23.7 and 24.0 million standalone graphics chips were shipped by AMD and NVIDIA in Q3 (assuming that PCs with discrete GPUs had only one discrete card, which is not far from truth as sales of multi-GPU systems are not high in terms of volumes). Nevertheless, keep in mind that data from JPR, IDC and Gartner reflects sold-in numbers - units from distributors rather than end-user sales - which means that not all GPUs ended up in systems already purchased by the end-user.

Fueled by the release of AMD’s Radeon RX family of discrete GPUs for desktops as well as NVIDIA’s launch of its GeForce GTX 10-series line, shipments of graphics cards for desktops increased 38.16% quarter-over-quarter (QoQ) in Q3, according to Jon Peddie Research. JPR does not officially disclose how many graphics adapters for desktop PCs were sold in the third quarter, but based on the company’s previously released numbers, we can estimate that various makers of add-in boards (AIBs) sold approximately 13.04 million video cards, which is up from 11.97 million units in Q3 2015 (see notes below). It is hard to estimate how many standalone GPUs for notebooks were shipped, during the discussed period, but we may be talking about roughly 10 million units.

It is evident that Q3 was a good year for desktop graphics cards in general. Moreover, the whole year to date has been positive for AIBs. Various manufacturers have sold a total 34.40 million GPUs in the first three quarters, up 5.35% from a total of 32.65 million in Q1+Q2+Q3 of 2015. Analysts from Jon Peddie Research attribute increases of desktop GPU shipments to new gaming content as well as the promise of virtual reality. Since more new games are about to be released in Q4 and because VR remains a highly discussed topic in the gaming community, it is likely that shipments of desktop discrete GPUs are going to stay at high levels for a while. Nonetheless, it remains to be seen whether their sales in Q4 beat their sales in Q3 (which sometimes happens, especially in cases when supply does not meet demand in Q3). 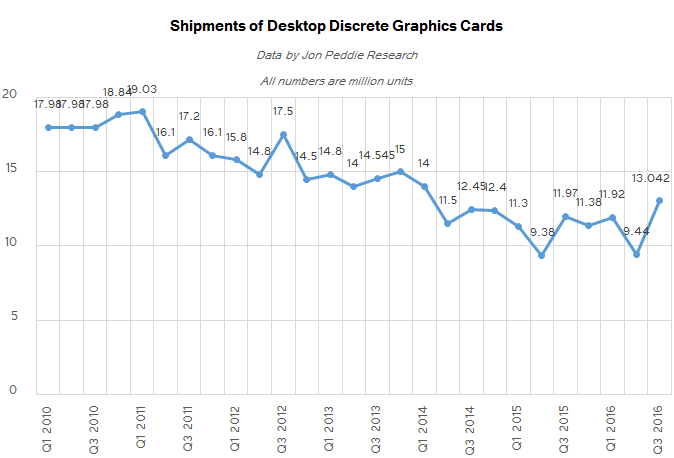 One of the things to note is the consolidation of the PC market. The three largest PC vendors (Lenovo, HP, Dell) controlled over 58% of the worldwide market in Q3 2016, up from 55% a year ago and 51% in 2014. Such consolidation happens not only because they can negotiate better deals with their suppliers and thus offer better pricing, but also because they are gradually expanding their product families. On the one hand they add mini PCs to their lineups, and on the other they roll-out gaming PCs. For example, this year we observed HP’s return to the market of gaming desktops with the Omen X and ASUS’ release of the ROG GT51 for $4999. Moreover, as markets such as VR are gaining publicity, large PC vendors will try to capitalize on this and offer gaming systems with discrete GPUs. Unfortunately, we have no idea whether this is going to be a long-lasting trend.