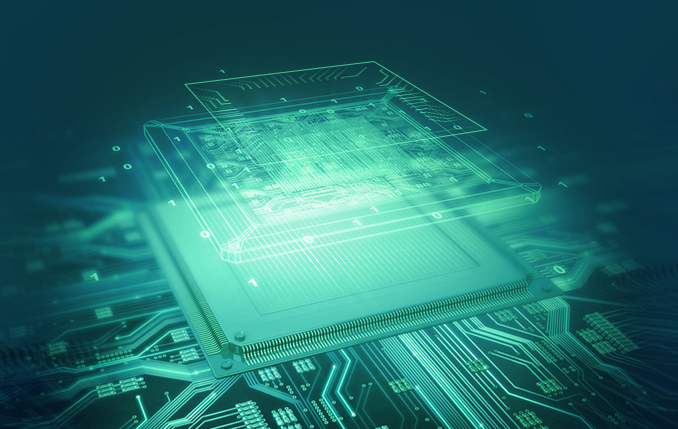 Samsung recently hosted its Samsung Foundry Forum 2018 in Japan, where it made several significant foundry announcements. Besides reiterating plans to start high-volume manufacturing (HVM) using extreme ultraviolet lithography (EUVL) tools in the coming quarters, along with reaffirming plans to use gate all around FETs (GAAFETs) with its 3 nm node, the company also added its brand-new 8LPU process technology to its roadmap.

Samsung Foundry’s general roadmap was announced earlier this year, so at SFF in Japan the contract maker of semiconductors reiterated some of its plans, made certain corrections, and provided some additional details about its future plans.

First up, Samsung added another fabrication technology into its family of manufacturing processes based on its 10 nm node. The new tech is called 8LPU (low power ultimate) and, according to Samsung’s usual classification, this is a process for SoCs that require both high clocks and high transistor density. Samsung’s 8LPP technology, which qualified for production last year, is a development of Samsung’s 10 nm node that uses narrower metal pitches to deliver a 10% area reduction (at the same complexity) as well as a 10% lower power consumption (at the same frequency and complexity) compared to 10LPP process. 8LPU is a further evolution of the technology platform that likely increases transistor density and frequency potential vs 8LPP. Meanwhile Samsung does not disclose how it managed to improve 8LPU vs. 8LPP and whether it involved advances of design rules, usage of a new library, or a shrink of metal pitches.

Samsung’s 8LPP and 8LPU technologies are aimed at customers who need higher performance or lower power and/or higher transistor density than what Samsung’s 10LPP, 10LPC, and 10LPU processes can offer, but who cannot gain access to Samsung’s 7LPP or more advanced manufacturing technologies that use EUVL. Risk production using 8LPU was set to start in 2018, so expect high-volume manufacturing to commence next year at Samsung’s Fab S1 in Giheung, South Korea.

Last year Samsung Foundry promised to start risk production of chips using its 7LPP fabrication technology in 2018. As it appears, it has initiated manufacturing of certain 7LPP SoCs, though presumably only for its parent company, as its MPW shuttle service schedule does not mention 7LPP at all. The production tech will be Samsung Foundry’s flagship process, so expect the company to use it first for its parent company’s mobile SoCs. Meanwhile, the process tech is also suitable for larger chips aimed at HPC, ML, and AI markets (think CPUs, specialized SoCs, etc.). For example, Samsung is prepping specialized IP for appropriate chips, including 100 Gbps+ SerDes and other. 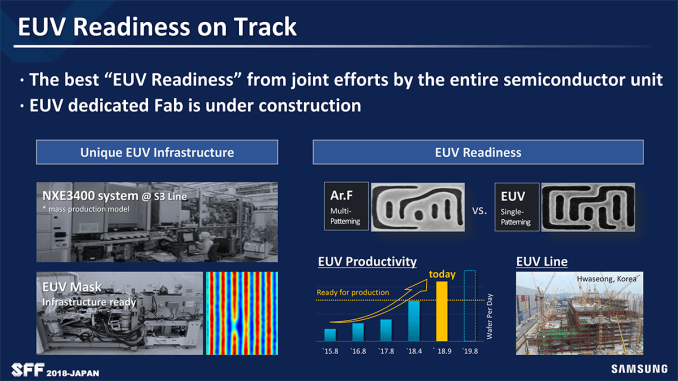 At the forum, Samsung Foundry said that it had installed multiple ASML Twinscan NXE:3400B EUVL step and scan systems at its Fab S3 in Hwaseong, South Korea. The company naturally does not disclose how many of such tools have been installed, but it indicated that wafer per day (WPD) performance of the said scanners is in line with its mass production targets. As reported before, the first manufacturing processes that will take advantage of EUVL will use it for select layers only, so do not expect extensive usage of the new equipment initially. In fact, since EUV will be used for HVM for the first time in the industry, Samsung Foundry is hardly inclined to expand its usage beyond select customers and designs (think Samsung Electronics and Qualcomm, which has already selected 7LPP for its Snapdragon 5G SoC due in 2019). 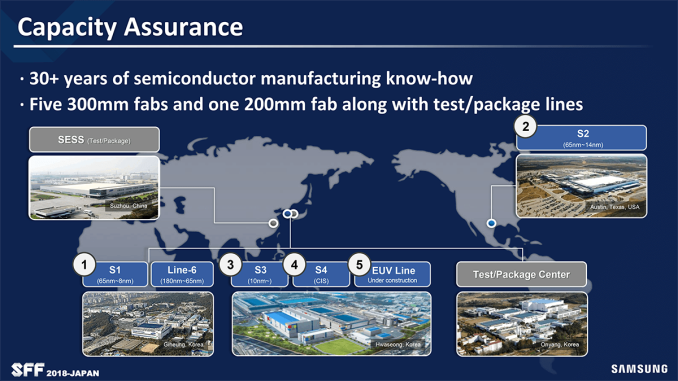 A radical expansion of EUV lithography usage by Samsung Foundry will occur after it builds another production line in Hwaseong, which will be architected for the EUV equipment from the start. The line is set to cost 6 trillion Korean Won ($4.615 billion), it is expected to be completed in 2019, and start HVM in 2020. As a result, Samsung’s production involving EUVL equipment will be limited to one fab for at least several quarters down the road. Generally, this is a reason why Samsung Foundry has developed its 8LPP and 8LPU process technologies.

By the time the new production line in Hwaseong becomes operational, Samsung Foundry promises to start risk production using its 5/4 nm node. As reported earlier this year, Samsung is prepping 5LPE, 4LPE, and 4LPP fabrication technologies, but eventually this list will likely expand. Based on what Samsung has disclosed about all three manufacturing processes so far, they will have certain similarities, which will simplify migration from 5LPE all the way to 4LPP, though the company does not elaborate. 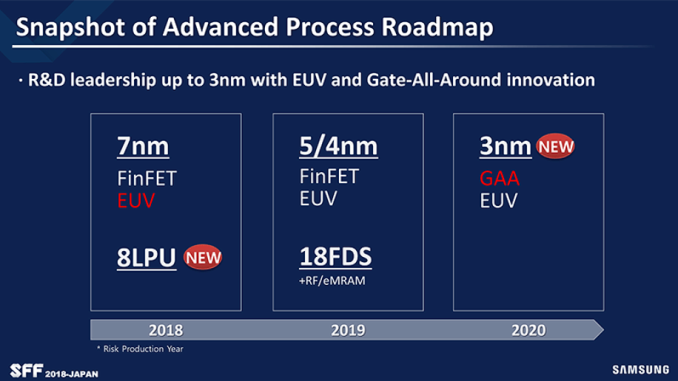 One of the slides the company demonstrated at SFF 2018 Japan indicates that Samsung expects risk production of chips using the 5/4 nm node to commence in 2019, indicating that the process technologies will coexist rather than follow each other. Since there are hardly any reason for Samsung to design competing fabrication processes, it is more likely that its 5LPE will be used for HVM first in 2020 and then 4LPE/4LPP will follow later on expanding usage of EUV equipment, unless Samsung’s roadmap changes significantly and certain offerings get canned (which tends to happen).

One of the things to keep in mind is that Samsung’s 5/4 nm will be the company’s last node to use FinFET transistors, which is why it will be “long” node that will be used for many years to come, just like the 28 nm technology is used today and will stay here for a long time.

One of the unexpected things that Samsung Foundry announced was start of risk production using its 3 nm node already in 2020, which is at least a year ahead of what was expected earlier. Samsung’s 3 nm will be the first node to use the company’s own GAAFET implementation called MBCFET (multi-bridge-channel FETs) and will officially include at least two process technologies: 3GAAE and 3GAAP (3nm gate-all-around early/plus).

Samsung still did not announce any HVM targets for 3GAAE and 3GAAP and it is hard to say when exactly the company adopts its MBCFET-based technologies for commercial SoCs. What we do understand today is that both technologies will rely on EUVL, so before using either Samsung will have to make sure that EUV delivers the necessary yields and production performance. Considering the fact that Samsung is satisfied with performance of its ASML Twinscan NXE:3400B EUVL step and scan systems today and expects further increases of WPD productivity, it is possible that it pulled in its 3 nm node.

Although GAAFETs are only several years away, technologies based on planar transistors are not going anywhere and keep evolving. Samsung Foundry will continue to back FD-SOI technology going forward and will offer a formidable rival for GlobalFoundries’ 22FDX and 12FDX offerings.

Samsung Foundry intends to start risk production of chips using its 18FDS already in 2019, so expect HVM in 2020 at the latest. The tech uses the same BEOL interconnects as Samsung’s 14LPE/14LPP technologies (i.e., BEOL originally developed for its 20 nm planar process), but with new transistors and FEOL. The company promises that when compared to its 28FDS, its 18FDS will enable a 20% higher performance (at the same complexity and power), a 40% lower power (at the same frequency and complexity), and a 30% lower die area.

What is particularly important is that 18FDS will support both RF and eMRAM, allowing Samsung Foundry to target a wide variety of applications that require RF and embedded memory in the 5G era in 2020 and onwards.

Chip packaging technologies are gaining importance these days as it becomes increasingly hard and expensive to integrate everything into a single processor. Samsung (just like TSMC and GlobalFoundries) already has a number of package solutions for complex products, such as FOPLP-PoP for mobile SoCs and I-Cube (2.5D) for chips that use HBM2 DRAMs. Next year the company will offer its 3D SiP (system-in-package) solution that will enable it to pack a variety of devices into a single three-dimensional package with a small footprint. 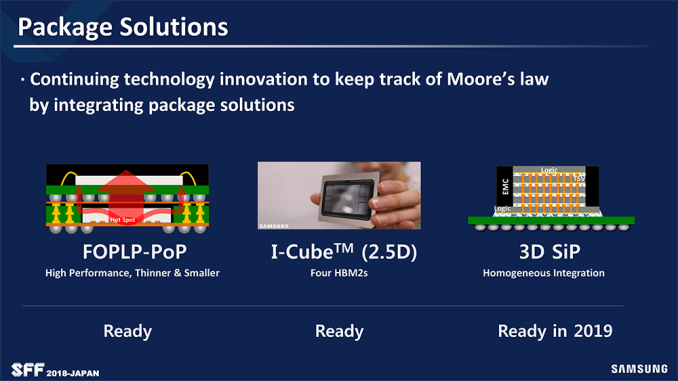 Samsung Foundry’s 3D SiP will be one of the industry’s first technology of its kind that will be used to build heterogeneous 3D SiPs (currently all SiPs are 2D). The package solution will enable the contract maker of semiconductors to assemble SiPs using components made using entirely different process technologies.