We’re moving on to SPEC2006, analysing the new single-threaded performance of the new Cortex-A77 cores. As the new CPU is running at the same clock as the A76-derived design of the Snapdragon 855, any improvements we’ll be seeing today are likely due to the IPC improvements of the core, the doubled L3 cache, as well as the enhancements to the memory controllers and memory subsystem of the chip.

The power figures presented today were captured using the same methodology we generally use on commercial devices, however this year we’ve noted a large discrepancy between figures reported by the QRD865’s fuel-gauge and the actual power consumption of the device. Generally, we’ve noted that there’s a discrepancy factor of roughly 3x. We’ve reached out to Qualcomm and they confirmed in a very quick testing that there’s a discrepancy of >2.5x. Furthermore, the QRD865 phones this year again suffered from excessive idle power figures of >1.3W.

I’ve attempted to compensate the data as best I could, however the figures published today are merely preliminary and of lower confidence than usual. For what it’s worth, last year, the QRD855 data was within 5% of the commercial phones’ measurements. We’ll be naturally re-testing everything once we get our hands on final commercial devices.

In the SPECint2006 suite, we’re seeing some noticeable performance improvements across the board, with some benchmarks posting some larger than expected increases. The biggest improvements are seen in the memory intensive workloads. 429.mcf is DRAM latency bound and sees a massive improvement of up to 46% compared to the Snapdragon 855.

What’s interesting to see is that some execution bound benchmarks such as 456.hmmer seeing a 28% upgrade. The A77 has an added 4th ALU which represents a 33% throughput increase in simple integer operations, which I don’t doubt is a major reason for the improvements seen here.

The improvements aren’t across the board, with 400.perlbench in particular seeing even a slight degradation for some reason. 403.gcc also saw a smaller 12% increase – it’s likely these benchmarks are bound by other aspects of the microarchitecture.

The power consumption and energy efficiency, if the numbers are correct, roughly match our expectations of the microarchitecture. Power has gone up with performance, but because of the higher performance and smaller runtime of the workloads, energy usage has remained roughly flat. Actually in several tests it’s actually improved in terms of efficiency when compared to the Snapdragon 855, but we’ll have to wait on commercial devices in order to make some definitive conclusions here.

In the SPECfp2006 suite, we’re seeing also seeing some very varied improvements. The biggest change happened to 470.lbm which has a very big hot loop and is memory bandwidth hungry. I think the A77’s new MOP-cache here would help a lot in regards to the instruction throughput, and the improved memory subsystem makes the massive 65% performance jump possible.

Arm actually had advertised IPC improvements of ~25% and ~35% for the int and FP suite of SPEC2006. On the int side, we’re indeed hitting 25% on the Snapdragon 865, compared to the S855, however on the FP side we’re a bit short as the increase falls in at around 29%. The performance increases here strongly depend on the SoC and particular on the memory subsystem, compared to the Kirin 990’s A76 implementation the increases here are only 20% and 24%, but HiSilicon’s chip also has a stronger memory subsystem which allows it to gain quite more performance over the A76’s in the S855. 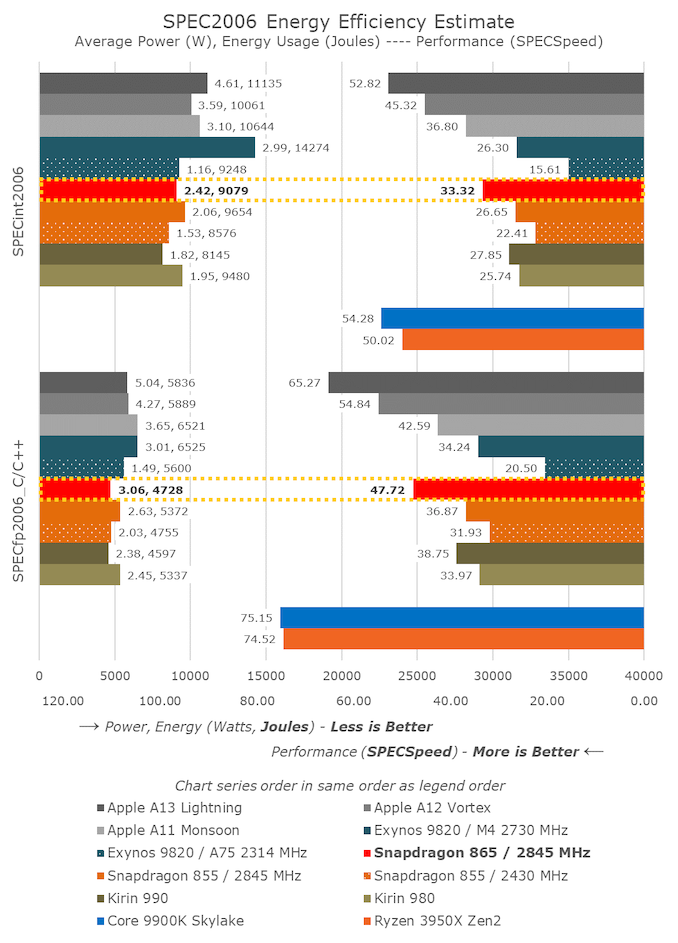 The overall results for SPEC2006 are very good for the Snapdragon 865. Performance is exactly where Qualcomm advertised it would land at, and we’re seeing a 25% increase in SPECint2006 and a 29% in SPECfp2006. On the integer side, the A77 still trails Apple’s Monsoon cores in the A11, but the new Arm design now has been able to trounce it in the FP suite. We’re still a bit far away from the microarchitectures catching up to Apple’s latest designs, but if Arm keeps up this 25-30% yearly improvement rate, we should be getting there in a few more iterations.

The power and energy efficiency figures, again, taken with a grain of salt, are also very much in line with expectations. Power has slightly increased with performance this generation, however due to the performance increase, energy efficiency has remained relatively flat, or has even seen a slight improvement.