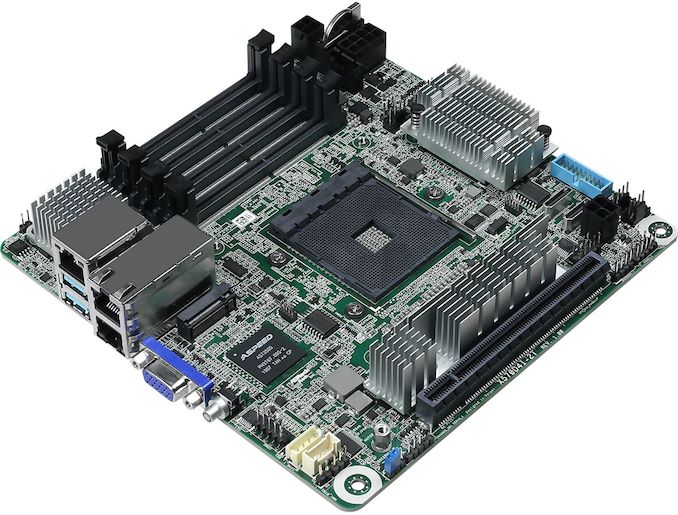 ASRock Rack has revealed a rather interesting Mini-ITX motherboard for AMD’s Ryzen 2000 and 3000-series processors with Intel’s X550 10 GbE controller. The X570D4I-2T platform can be used both for high-performance desktops and for small form-factor servers/NAS with robust storage capabilities.

The ASRock Rack X570D4I-2T motherboard is based on AMD’s X570 chipset and supports all the latest AMD Ryzen 2000/3000-series processors with up to 16 cores and a 105 W TDP. The platform has four DDR4 SO-DIMM slots supporting up to 64 GB of DDR4-2400 memory with or without ECC, one PCIe 4.0 x16 slot for graphics cards (when used with an appropriate CPU), one M.2-2280 slot supporting PCIe 4.0 x4 or SATA SSDs, and two OCulink connectors that bring support for eight SATA 6 Gbps ports (controlled by the X570). Since the Mini-ITX motherboard can be used for servers, it also carries the ASpeed AST2500 BMC.

The choice of the 10 GbE controllers may seem a bit odd since we are talking about an AMD-based motherboard, but it looks like ASRock Rack originally developed the X570D4I-2T for a particular customer that required an Intel NIC, but wanted to take advantage of AMD’s latest desktop platform. In fact, the latter does have a unique set of features not available elsewhere: a support for a 16-core (reasonably priced) CPU, eight SATA ports, and 20 PCIe 4.0 lanes. Using the X570D4I-2T, it is possible to build an extremely advanced desktop PC with discrete graphics card and vast storage capabilities, or a small form-factor server/NAS featuring 128 TB of SATA storage and terabytes of ultra-fast NVMe storage that can be accessed using 10 GbE ports.

The ASRock Rack X570D4I-2T motherboard is now listed at the company’s website, so expect it to be available shortly. Considering all the peculiarities of the platform, it is hard to tell whether this one will be available widely in retail (if at all), but at least it can be ordered directly from the company.