AMD's RDNA 2 Gets A Codename: “Navi 2X” Comes This Year With 50% Improved Perf-Per-Watt

While AMD’s Financial Analyst Day is first and foremost focused on the company’s financial performance – it’s right there in the title – this doesn’t stop the company from dropping a nugget or two of technical information along the way, to help excite investors on the future of the company.

One such nugget this year involves AMD’s forthcoming RDNA 2 family of client GPUs. The successor to the current RDNA (1) “Navi” family, RDNA 2 has been on AMD’s roadmap since last year. And it’s been previously revealed that, among other things, it will be the GPU architecture used in Microsoft’s forthcoming Xbox Series X gaming console. And while we’re still some time off from a full architecture reveal from AMD, the company is offering just a few more details on the architecture.

First and foremost, RDNA 2 is when AMD will fill out the rest of its consumer product stack, with their eye firmly on (finally) addressing the high-end, extreme performance segment of the market. The extreme high end of the market is small in volume, but it’s impossible to overstate how important it is to be seen there – to be seen as competing with the best of the best from other GPU vendors. While AMD isn’t talking about specific SKUs or performance metrics at this time, RDNA 2 will include GPUs that address this portion of the market, with AMD aiming for the performance necessary to deliver “uncompromising” 4K gaming. 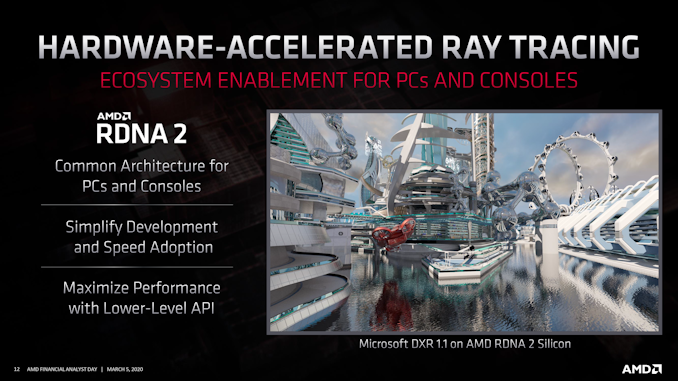 But don’t call it "Big Navi". RDNA 2 isn’t just a series of bigger-than-RDNA (1) chips. The GPUs, which will be the codename “Navi 2X” family, also incorporate new graphics features that set them apart from earlier products. AMD isn’t being exhaustive here – and indeed they’re largely already confirming what we know from the Xbox Series X announcement – but hardware ray tracing as well as variable rate shading are on tap for RDNA 2. This stands to be important for AMD at multiple levels, not the least of which is closing the current feature gap with arch-rival NVIDIA. 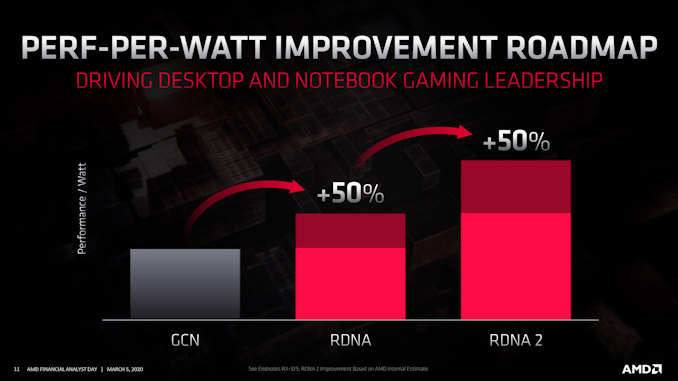 And AMD didn’t stop there, either. Even to my own surprise, AMD isn’t just doing RDNA (1) with more features; RDNA 2 will also deliver on perf-per-watt improvements. All told, AMD is aiming for a 50% increase in perf-per-watt over RDNA (1), which is on par with the improvements that RDNA (1) delivered last year. Again speaking at a high level, these efficiency improvements will come from several areas, including microarchitectural enhancements (AMD even lists improved IPC here), as well as optimizations to physical routing and unspecified logic enhancements to “reduce complexity and switching power.” 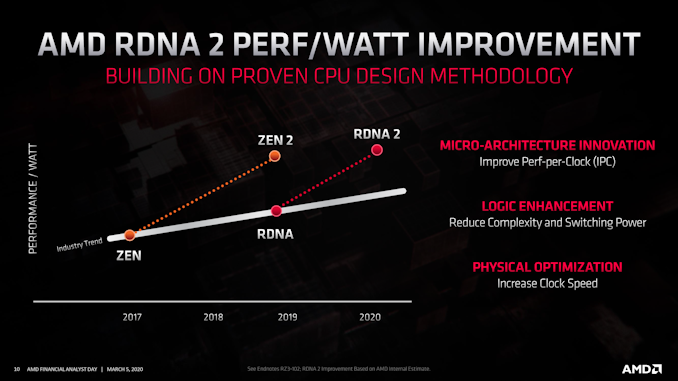 Process nodes will also play some kind of a role here. While AMD is still going to be on a 7nm process here – and they are distancing themselves from saying that they'll be using TSMC’s EUV-based “N7+” node – the company has clarified that they will be using an enhanced version of 7nm. To what extent those enhancements are we aren’t sure (possibly using TSMC’s N7P?), but AMD won’t be standing still on process tech.

This strong focus on perf-per-watt, in turn, will be a key component of how AMD can launch itself back into being a fully viable, top-to-bottom competitor with NVIDIA. While AMD is already generally at parity with NVIDIA here, part of that advantage comes from an atypical advantage in manufacturing nodes that AMD can’t rely on keeping. NVIDIA isn’t standing still for 2020, and neither can AMD. Improving power efficiency for RDNA 2 (and beyond) will be essential for convincingly beating NVIDIA. 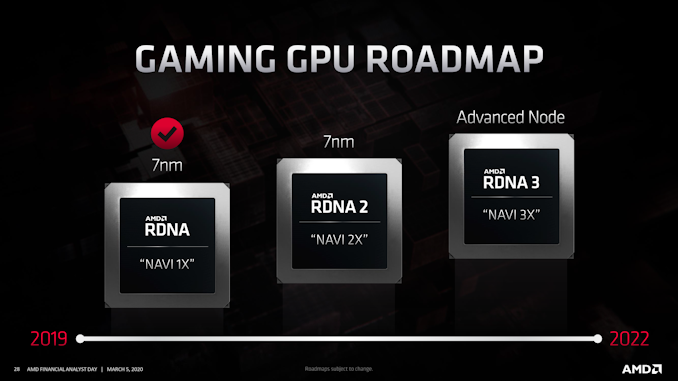 Overall, AMD has significant ambitions with RDNA 2, and it shows. The architecture will be the cornerstone of a generation of consoles, and it will be AMD’s first real shot in the last few years at taking back the flagship video card performance crown. So we’re eagerly awaiting to see what else RDNA 2 will bring to the table, and when this year the first video cards based on the new architecture will begin shipping.