It is no secret that Intel's 10th generation processors are power-hungry. Intel has been squeezing every last drop of MHz out of the 14 nm process with its fastest desktop processors yet, but sometimes conventional air cooling just won't suffice for those wanting to push the limits even further. ASRock understands this, and building on the success of the elegant (yet wallet-emptying) AMD Aqua, the company unveiled an Intel version.

The Z490 Aqua comes equipped as a premium feature motherboard. The large integrated monoblock which cools both the CPU and the board's power delivery, amd it now features a very cool OLED display. There is also integrated Thunderbolt 3, 10 gigabit Ethernet, as well as its large 16-phase power delivery.

ASRock's highly premium and highly priced Z490 Aqua, on looks alone, exhudes over-engineering. As a marketing platform, over-engineering is a good thing, especially when the motherboard costs twice as much as the processor. From my perspective, the visual effect of the ASRock Z490 Aqua makes it one of the best-looking motherboards of all time. The design and implementation of its large CPU and VRM monoblock, with a seemingly endless amount of aluminum plating across the PCIe slot area, looks great. Not only that, but ASRock has included various areas of addressable RGB LEDs built onto the board, with an exquisite OLED panel that can display information ranging from CPU Voltage, CPU Temperature, and POST Status. It really sets it apart from the X570 Aqua we reviewed last year. 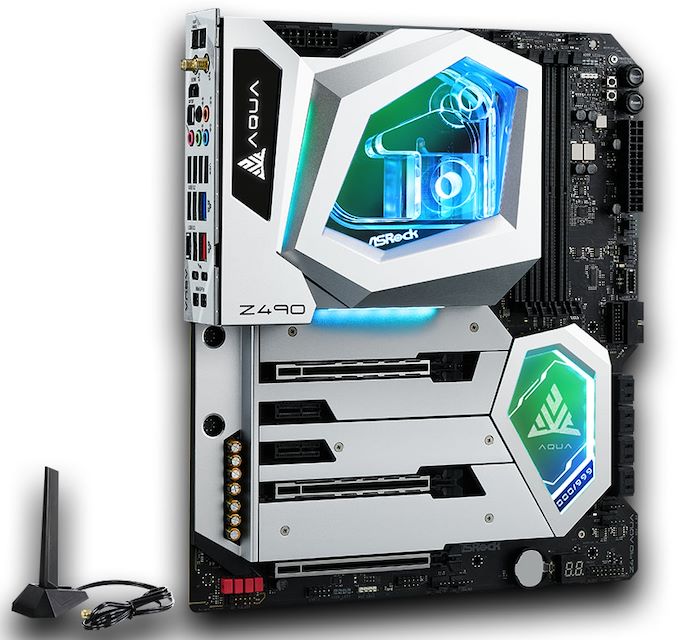 The ASRock Z490 Aqua is packed with features and appeal from top to bottom, with high-end enthusiasts using custom water cooling loops the primary target market. It includes one of the most premium desktop feature sets from any board we've seen from ASRock, with triple PCIe 3.0 x4 M.2 slots, eight SATA ports, and a solid networking array including a 10 gigabit Ethernet controller, with an additional 2.5 G port. An Intel-based Wi-Fi 6 CNVi provides both wireless networking and BT 5.1 capabilities, with an 8-layer PCB and 2 oz copper PCB for the board's finer circuitry. 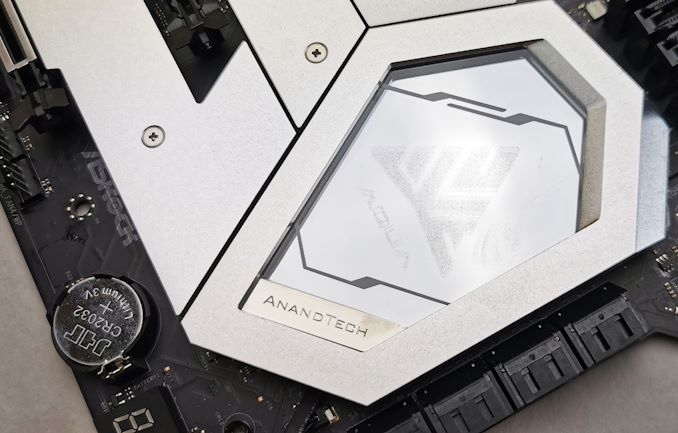 I got 99 problems, but an Aqua ain't one

Focusing on the power componentry of the Z490 Aqua, ASRock includes a large 16-phase power delivery, with fourteen premium 90A power stages for the CPU, with two 90A power stages for the SoC. It is cooled by the large custom monoblock, which is the board's main feature, which may be needed should users even attempt to use the power deliveries massive 1260 A current the CPU section is designed to deliver. 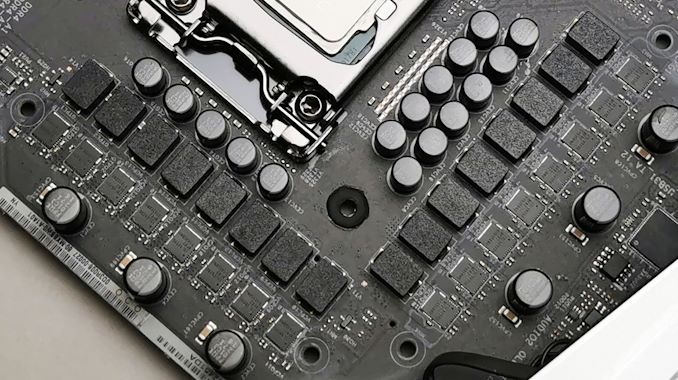 Another notable area is that the Z490 Aqua is well equipped in is connectivity, with an Intel Titan Ridge Thunderbolt 3 controller. This provides two 40 Gbps ports on the rear panel as well as with two mini DisplayPort inputs for users looking to leverage the multi-display capabilities of Thunderbolt 3. Also included are three additional USB 3.2 G2 Type-A and a single USB 3.2 G2 Type-C port, with four further USB 3.2 G1 Type-A ports. This is a lot of connectivity, so ASRock is trying to deliver on all areas with the Aqua, not just at enthusiasts and overclockers, but content creators too. ASRock also includes a premium audio solution with a separate DAC designed to boost users looking to use front panel audio.

In our test suite, the Aqua is very competitive with other Z490 models we have tested so far, with solid results in our DPC latency testing, which I will note is done at default settings with no OS tweaking. The figures in our power testing were a little more than normal in the idle power states, but the Aqua has lots of controllers and RGB, so it's easy to see why. In the computation and gaming tests, the Aqua showed no gaping flaws and was consistent with other boards in our charts. 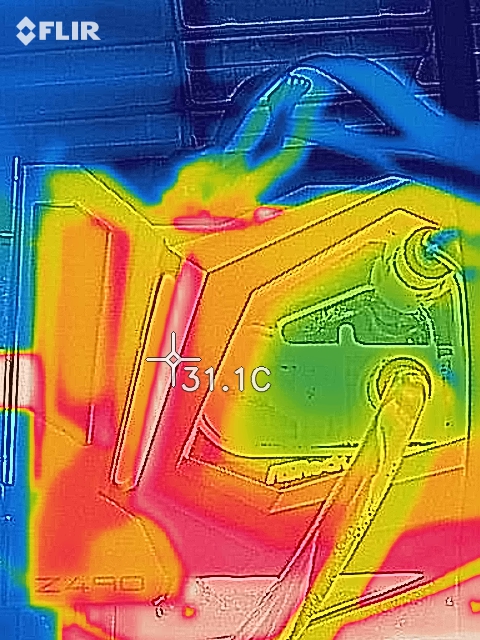 The ASRock Z490 Aqua under a thermal imaging camera

It's no surprise with all the bells and whistles it has, that the Aqua is an overclocking stud. The Aqua has solid VDroop control, which is likely due to ASRock's firmware, which reverts the loadline calibration profile to level 1 when any alterations to the CPU VCore are made. Although we didn't manage to push our i7-10700K beyond 5.3 GHz stable, which seems to be the limit of our silicon, we did see much better temperatures and no thermal throttling at 5.2 GHz, unlike other models we have tested. This is all down to the cooling, custom loop. The large monoblock cools both the CPU and the monolithic power delivery, which shows up well in our VRM thermal testing, and puts the Aqua a cut above the rest regarding thermal performance.

In regards to competitors, there isn't much on the market that competes with the all-round nature of the ASRock Z490 Aqua, especially with its custom monoblock. There are only a couple of Z490 models with monoblocks, namely GIGABYTE's X570 Aorus Xtreme WaterForce, which costs a whopping $1300, and the more affordable, albeit less premium, MSI MPG Z490 Carbon EK X ($400). ASRock's Aqua retails for $1100, which is around $200 cheaper than the GIGABYTE but still includes some very premium aspects that a board of this pedigree should include. ASRock also sweetens the deal with very attractive packaging, and an included Aqua themed set of water cooling fittings in the accessories bundle. It should be noted that only 999 of these boards will be made available to the consumer, and being limited edition has its perks, but this does come at a price, $1100, to be exact.

The question then becomes if you really want a motherboard that costs almost 2x of the overclockable Core i9 parts. For system integrators looking to build the most premium Z490 platform system, it makes sense. For companies that employ modders to show off hardware (such as liquid cooling, or power supplies, or DRAM), this also makes sense. For the average user? Read on for our extended analysis and comparison tests.