Dr. Lisa Su, the CEO of AMD, has today announced the company’s next generation mainstream Ryzen processor. The new family, known as the Ryzen 5000 series, includes four parts and supports up to sixteen cores. The key element of the new product is the core design, with AMD’s latest Zen 3 microarchitecture, promising a 19% raw increase in performance-per-clock, well above recent generational improvements. The new processors are socket-compatible with existing 500-series motherboards, and will be available at retail from November 5th. AMD is putting a clear marker in the sand, calling one of its halo products as ‘The World’s Best Gaming CPU’.  We have details.

With the new Ryzen 5000 series, AMD is keeping a similar structure to the previous generation. The first four processors to market will include products in the key Ryzen 5 and Ryzen 7 segments, as well as a pair of high-performance parts with Ryzen 9. These will stretch from six cores to sixteen cores, with increased frequencies and increased performance-per-clock, but with no additional increase in power. The processors are still chiplet-based, with one chiplet having either six or eight cores. Ryzen 5 and Ryzen 7 will have one chiplet, while Ryzen 9 will have two chiplets – the easy way to identify this is through the amount of L3 cache each processor has.

Sitting on the top of the processor line is the new halo Ryzen 9 5950X. With 16 cores and 32 threads, it has a listed base frequency of 3.4 GHz and a boost frequency of 4.9 GHz. With two chiplets it has the full 64 MB of L3 cache, and the 105 W rated TDP is equal to the 16-core equivalent of the previous generation. This processor will retail slightly higher than the previous generation, with AMD making the move from $749 MSRP to $799 MSRP.

The second processor is the Ryzen 9 5900X, which offers 12 cores and 24 threads, using two six-core chiplets and having a full 64 MB of L3 cache. With a base frequency of 3.7 GHz and a turbo frequency of 4.8 GHz, AMD is calling this processor the ‘World’s Best Gaming CPU’. This is likely because of the lower core count than the other Ryzen 9 allowing slightly higher frequencies when a game loads up several of the cores – the six cores per chiplet lowers the thermal density when running, enabling higher frequencies. The extended L3 cache per chiplet (explained later) reduces the effective latency by allowing more data to be stored before main memory access is required. This Ryzen 9 5900X also has a 105 W TDP, and the price of this 12-core is also slightly higher, moving from $499 MSRP to $549 MSRP.

The Ryzen 7 5800X is expected to follow in the footsteps of the popular Ryzen 7 3700X, which currently sits as #2 on Amazon’s best seller list. This is a single chiplet processor with eight cores and sixteen threads, running at 3.8 GHz base and 4.7 GHz boost. With it only being a single chiplet, it has 32 MB of L3 cache, but it has the 105 W TDP allowing for higher sustained frequencies. AMD believes that the increased raw performance of its product demands pricing more consummate with its position in the market, and so we see a slight MSRP increase from $399 to $449.

The base model at launch this time around is the Ryzen 5 5600X, with a single chiplet of six cores and twelve threads, running a base frequency of 3.7 GHz and turbo frequency of 4.6 GHz. This will be the only processor (at launch) with a 65 W TDP, and as such this is the one that AMD will ship with a bundled cooler. It takes over from the Ryzen 5 3600 family, which sits as #1, #3, and #7 in Amazon’s best seller list. With a $299 MSRP, it comes in again a little pricier than the parts it replaces; however AMD is promoting that in terms of performance per dollar, this mainstream component gives a lot more than its competition.

All four processors have the same official memory support at DDR4-3200, and the 105 W TDPs will offer a turbo power of 142 W, which is the same as the current generation Ryzen processors. AMD has decided to only bundle coolers with processors 65 W and under, citing that in its research that customers who buy the higher power processors almost always prefer to use their own cooler to eke out more performance when at full load. We were told that if they were to bundle one of AMD’s 125 W coolers with the 105 W processors, they would have to reduce frequency a little in order to compensate for the cooler being the lowest common denominator for those systems – those 105 W processor users, I was told, would much rather have the extra frequency and performance with their own cooler.

For the Ryzen 5000 series, AMD stated that the IO die is the same as the previous generation. There are still 24 lanes of PCIe 4.0 support, as well as the associated NVMe/SATA allocation. There was a note about 500 series chipset support and how customers can prepare for it, as well as upcoming 400 series support, which we’ll cover separately.

All four processors will be available, at retail and e-tail, on November 5th.

AMD told us that feedback they had received from the last generation launch, where the 16-core processor was announced later, motioned the company towards a unified launch. When asked if AMD could comment on stock levels on launch day, especially as we consider the company has lots of console processor orders at TSMC, future graphics hardware orders at TSMC, as well as future EPYC hardware in the mix, AMD declined to comment on the matter, except to say that they’ve been working hard with retailers and distributors to share best practice solutions when it comes time to dealing with bots and scalpers, to avoid a repeat of other highly anticipated hardware launches.

A word on naming. It might be easy to spot that AMD has bypassed the 4000-series for its desktop hardware. When quizzed on this matter, AMD’s Robert Hallock stated that as the company had already launched OEM processors with integrated graphics into the 4000-series naming, built on Zen 2, the company felt that in order to ensure that the new Zen 3 processors were easy to identify (or search for) that it should get its own naming sequence. What AMD did not mention that this also gives them an opportunity to unify its CPU and APU series codenames as-and-when Zen3 based APUs come along. There is also a third factor, in that the number 4 in China is often seen as an unlucky number due to the sound of the number being close to the sound of the Chinese word for ‘death’. The Chinese market has been a key growth market for AMD, and so aligning its latest generation hardware out of the ‘4000’ category will remove a potential negative to sales. This is also perhaps why so few of AMD’s processors contain the number 4.

As part of the new Ryzen 5000 series announcement, AMD was keen to point out that it believes it is the only mainstream desktop processor company on the market with a year-on-year cadence of products that truly breaks new grounds for performance. The key highlight of the announcement is this +19% improvement in performance compared to the previous generation, which AMD says gives it a significant lead in overall single threaded performance, multi-threaded performance, 1080p gaming, power efficiency, and when combined with price, performance per dollar. AMD believes it has a full well-rounded product to beat Intel's best in the workloads that matter most to its users. It has been a long, long time since AMD has had the bravado to claim the top crown across the board.

The +19% value that AMD is using is taken from internal testing, using the geometric mean of 25 benchmarks involving a mixture of real-world and synthetic. AMD states that they compared the Ryzen 9 3900X, the previous generation 12-core processor, to the Ryzen 9 5900X, the new generation 12-core processor, both at 4.0 GHz fixed frequency and running DDR4-3600. Of that 19% number, AMD has attempted to break down where it believes these benefits have come from: 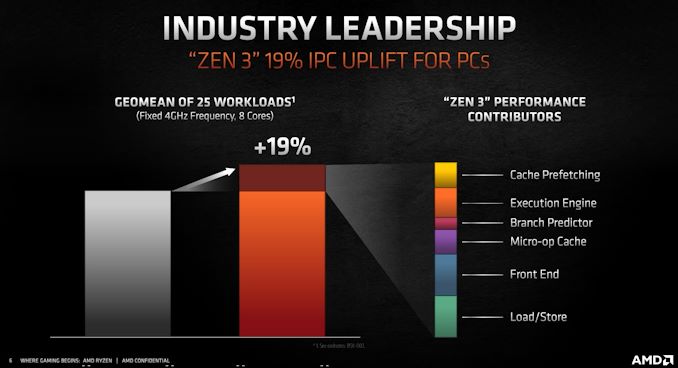 This equates as roughly:

AMD did not want to go into specific details on how these numbers were achieved at this time, and stated that we would get time to go deeper into the microarchitecture ready for articles on the day that these processors come to market. What AMD did say however is that this new Zen3 core is a ‘front-to-back redesign’ over Zen2, and the key SoC innovation they did want to highlight was the new 8-core structure in each chiplet. 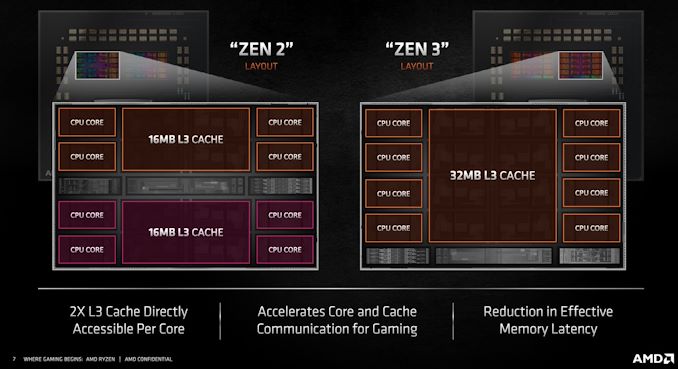 As expected in Zen 3, AMD has combined two four core structures (or core complexes, CCX) into a single eight-core structure. This means that all eight cores have access to the 32 MB of L3 cache inside a chiplet, and the latency for each core from 16 MB to 32 MB is greatly improved (previously when you went beyond 16 MB with a core, you would end up in main memory, which is comparatively slower and more power hungry). Due to the increase in L3 cache and the reduced cache latency in this 16-32 MB region, AMD is calling this an ‘effective reduction in memory latency’. No numbers were attached to this claim at this time, and AMD did not state if there were any specific microarchitecture changes in the cache hierarchy to assist with the larger cache access patterns.

But, what we can extrapolate is that whereas in the previous generation, because each chiplet had two core complexes, each complex had its own fabric connection to the rest of the chip. With a single eight-core unified complex design, there is now less core-to-core communication that's required to go off the chiplet. For single chiplet designs, this gets elimated completely, and for dual chiplet designs, each complex only needs to probe one other complex, rather than three. The peak bandwidth should still be the same however, but in a real-world scenario, there should be less cross-talk to deal with. This would scale better for the enterprise hardware, assuming it still retains the eight-chiplet design.

On process node technology, AMD clarified that these processors are using the same 7nm process that the company has contracted from TSMC as it did with the Ryzen 3000XT processors. Users may remember that AMD and TSMC were able to eke some extra efficiency from the base 7nm process, which was productized in the 3000XT family that launched mid-cycle. AMD is claiming that with this process for Zen 3, they can claim a 2.4x performance per watt improvement over the first generation of Ryzen, or a 2.8x performance per watt lead over Intel’s latest Comet Lake halo processor. We will have to test this when samples arrive.

We are waiting for access to engineers for a fuller breakdown of AMD’s Zen3 microarchitecture. You should expect to see our analysis as part of our launch day reviews on November 5th.