Given ASUS’ boasts about the strength of bamboo, I was really dying to see the build quality of the U33. And I can report that overall, it’s pretty good. The interior is rock solid, between the bamboo assembly for the palm rests and touchpad and the brushed aluminum for the keyboard tray and speaker grille. There's no flex to speak of anywhere, with the chiclet keyboard also being flex free. The display assembly on the other hand… that I’m a bit less happy with. The lid exhibits some flex under pressure, and the display shows a bit of ripple effect, but overall it’s not too bad.

Aesthetically, what you think of the U33 depends on how you feel about the bamboo. Obviously, the dark-stained bamboo veneer is the main feature, but the chrome edges and the light brown brushed aluminum on the interior are nice touches which complement it. Usually, chrome is an absolute no on laptops (remember the awful HP notebooks with chrome trim?), but on the U33 the brightwork nicely offsets the dark wood. Overall, the look is pretty upscale, with a nice mix of the matte textured bamboo and the brighter and glossier metals. With that said, if you’re a fan of metal bodied laptops, you’ll probably be much happier with the aluminum casing used in the U30Jc and U35Jc.

The keyboard is definitely a plus point. I’d actually go so far as to rate this as one of the best keyboards in a consumer level machine. Obviously, it can’t touch the enterprise-class ThinkPads and Latitudes of the world, but it’s a very good keyboard. No flex to speak of, good spacing between keys, good layout, and a bit more key travel than most other thin and lights. The extra travel is what separates it from other good chiclet keyboards like on the MacBook and Sony’s 13”ers and gives it a more pleasant typing experience. It won’t wow you, but having a decent keyboard with no major flaws is actually pretty nice for a midrange consumer machine. It’s surprising to see how many major manufacturers manage to screw up the keyboard (Acer, Toshiba, I’m looking at you) and I’m glad to report that Asus hasn’t. 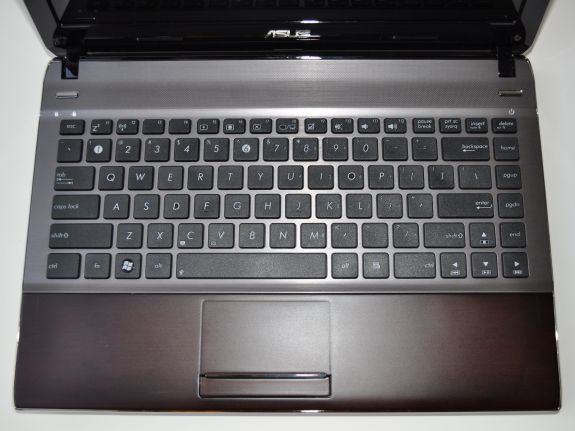 The touchpad is an interesting one. It’s part of the same bamboo panel that makes up the palmrest. The touchpad circuitry itself is made by Elan Microelectronics and accounts for the extra thickness added by the bamboo panel and has some multitouch gestures not yet implemented by Synaptics. I was pretty impressed that they managed to get the touchpad to work smoothly even with the thicker wood and plastic covering the sensor. It’s interesting to have a bamboo texture underneath, but other than that, the touchpad just works. The mouse buttons are also covered by wood to keep the aesthetic uniform.

The ports are actually pretty good, even better than the U30Jc. We’re talking 2 USB 2.0, one USB 3.0, HDMI, VGA, headphone out, line in, a memory card reader, and Intel’s Wireless Display. I’m a bigger fan of WiDi than some people, since seamlessly streaming your laptop’s display to your HDTV is a pretty sweet innovation - it’s a wireless HTPC! I wrote about it at length in my Mobile Buyer’s Guide last week, so you can read more about it there. The USB 3.0 port is another premium touch that is exclusive to the U33Jc amongst Asus’ plethora of thin and light notebooks, and while I don’t see it being particularly useful for everyone, it should be a godsend for people that have USB 3.0 external hard disks. Beyond that, the port selection is about par for the thin and light class.

The speakers are located at the top of the keyboard, which is a nice change from all the other portables that have the speakers under the front edge. Output and sound quality are decent for a small notebook, but for any kind of serious listening you will want to connect to a good speaker system or headphones of some kind. The webcam is nice in that it has a physical shutter to open and close, so you are ensured of privacy. I didn’t get a whole lot of time to test the webcam and mic functionality for videoconferencing, but I saw nothing to suggest that they wouldn’t be perfectly adequate for Skype.