At this point, it’s a bit weird to review Minecraft. It has been fully available for purchase for a little more than two years, and in spite of its more than four million copies sold it’s still popular enough that you can watch that number continue to inch up on its homepage. It has spawned a company (which in turn is already publishing and developing other projects), a convention, mobile and console versions, a forthcoming documentary, and endless reviews and editorials already. The “gold” version of the game was just released, but even so we’re a bit past needing to review it.

I feel the need to say something about it in spite of that, though, because like it or not this is an important game. It’s the best possible argument you could make for the merits of independent game development and distribution. It highlights why the PC is still a viable and valuable platform, in spite of its repeated supposed “death” at the hands of consoles and, more recently, smartphones and tablets. It’s the only game I can think of where bits of development were effectively crowdsourced—the final 1.0 version of Minecraft was tested and debugged with much help from players on the fan-run Minecraft wiki, which is the closest thing the game has to a manual. We’ll be using it as an example when we talk about games in the future, the same way we might use Mario or Halo now. 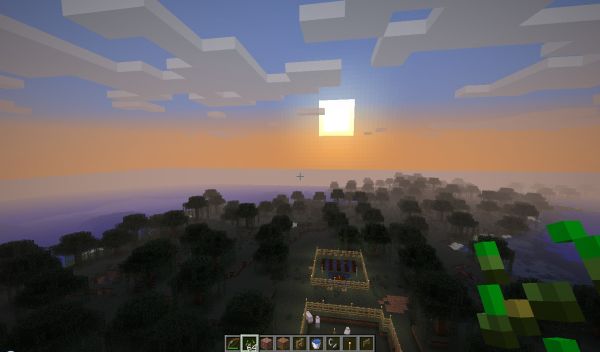 Gushing aside, though, there’s a game here, and it’s not perfect, though there’s a lot to like about it. If you’ve somehow avoided it up until now, here’s how it works.

Minecraft has at its core three basic gameplay elements: the building (and destroying) of blocks, the crafting of items, and the exploration of the open, dynamically generated world (the mining part of the game falls under this heading). You can walk up to a tree and punch it until you get wood, which you can turn into wooden planks, which can be used to make sticks, which can be used to make tools, which you can use to quickly harvest materials you need to make yourself a shelter. You’ll need to do this, because once the sun sets the monsters come out, and they’d be all too happy to shoot you with arrows or jump on you or explode next to you. The “point” at first is to survive, and, as you become more comfortable, expand your tiny shelter into a huge, more impressive structure.

If you’ve played the game at any point before its demonstration at this summer’s Penny Arcade Expo, this will all be familiar to you—this is the root of the game and it’s still fully intact in the final version. In the last few months, sound effects and graphics have been tweaked, a new “hunger bar” requires you to keep your stomach full lest you starve, and things like weapon damage have been subtly tweaked, but if you’ve played the game at pretty much any point in its existence it’s going to be very familiar.

Early on in my very first Minecraft playthrough, I managed to survive for a couple of days and then got a bit of a “now what?” feeling. To alleviate this, you’ll want to go exploring—mine shafts, caves, and ruins dot the expansive maps, and each of them contain different rare elements that you’ll need to craft some of the game’s more complex (and interesting) items, which leads me to my next point. 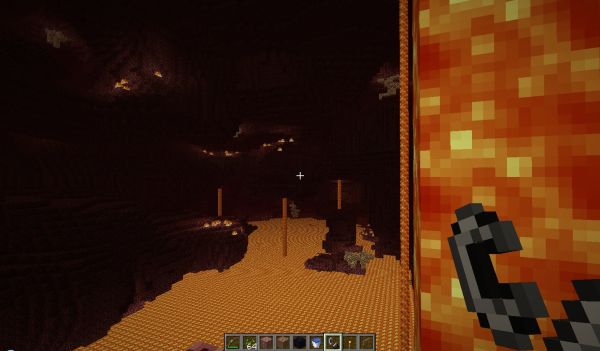 On top of the basic game mechanics that have come to define Minecraft, the development team has added on some new things to keep advanced players hooked. These include deep and sometimes obtuse systems for enchanting items and creating potions, larger oceans and worlds, and animal breeding, among other things. These systems seem to have been created with the Minecraft obsessive in mind—if you don’t enjoy poring over the wiki trying to figure out how everything works, it might not be for you.

The basics of potion-making, for example, require you to delve deep into the earth to find enough diamond to make a diamond pickaxe, with which you can harvest obsidian, which you need to use to construct a portal to a hell dimension, which is the only place in the game where you can find the ingredients you need to build a brewing stand and find some of the basic brewing ingredients. Sounds more complicated than walking up to a tree and punching it, yes?

The easy-to-grasp basics of Minecraft—building, mining, crafting—are fun, addictive, and easy to recommend not just to gamers, but to the “casual” demographic as well. The more complicated new additions are designed to appeal to a more traditional sort of gamer. It’s not a bad thing, necessarily, but I could see the new systems muddying the simple fun of the game for some.

For people who are in it just for the fun of building, the “creative” mode is for you: it gives you unlimited supplies of all the game’s blocks, removes the health meter, and lets you fly around the map. If you want to make a giant skyscraper without worrying about fall damage, or if you’d like to build an underwater city without the complications of creating an enchanted helmet or potion for underwater breathing, this is what you want.

Mojang has also tried to give the game an “ending” of sorts, a logical goal toward which players can work along with the requisite boss fight, but it feels as though it was tacked on pretty late in development (which it was—it was one of the last things to be added before last month’s feature freeze). It’s there if you want to pursue it, and it will probably be improved in future updates, but what’s there is more a thing you do to get an achievement than it is a fun task in and of itself.

Minecraft is plenty fun and addicting in its single player iteration, but it’s also a lonely game—aside from the patch of land you claim and then develop to serve as your home, you’re stuck in the middle of a practically endless expanse of world with a few animals and a bunch of monsters. The most fun I’ve had playing Minecraft has been with others.

The social implications of the game are obvious: it’s more fun to build something when you can show someone else the fruit of your labors. Finding and exploring caverns is quicker and (in theory) easier with one or more friends. It’s reasonably easy to set up a Minecraft server on your desktop or laptop that can support three or four people (depending mostly on your upload speed), and public servers with dozens of players are easy to find (if a bit unsafe for you and your creations—more on that in a bit).

Out of the box, the game has two major issues that come to mind after months of play, though both have been more or less remedied by the fan community and don’t appear to have hurt either the game’s sales or popularity.

The first, as some have noted, is that the game offers little by way of in-game instruction. A simple achievement map points you in the general direction you’ll need to go for the very basics, from punching your first tree right up to tackling the “end” of the game, but things like crafting recipes aren’t given to the player in-game, requiring players (and especially newbies) to make frequent trips to the Minecraft wiki or another such resource to create the items they need.

The second issue is lack of player protections in multiplayer—by default, anyone can go up to anyone’s structure (or treasure chest, or what have you) and break it or loot it or pour hot lava all over it, and getting killed (and dropping all of your loot for anyone to pick up) happens with some regularity. If you don’t share your server’s address (or if you make use of the server’s whitelist) you can nullify this, but administratorss of public servers usually turn to game mods to protect players, their structures, and their possessions. (A side note on mods: they are plentiful, often excellent, and actively encouraged by Minecraft’s developers. It would require another piece entirely to cover them in any detail.) 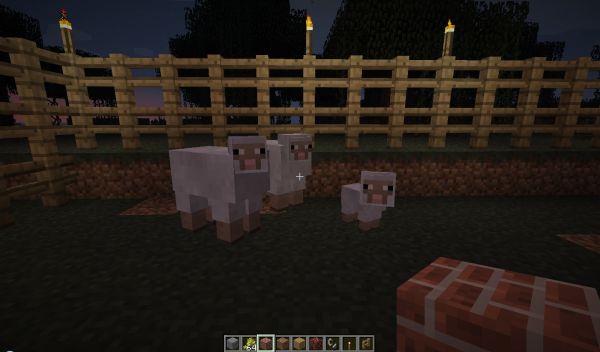 Despite these issues, the game that you get if you buy it today is pretty robust and full-featured, and Mojang says that additional free content updates will continue to roll out over time (though nothing has been said about the amount or frequency of such updates). The replay value and bang/buck ratio that Minecraft represents is hard to beat, though you should still try the demo if you’re not sure you’ll like it.

Minecraft deserves almost all of the good things that people have said about it. In a marketplace full of iterative games that often have a little too much in common with one another (and speaking as someone who enjoys many of said iterative games), it’s something unique. It can be almost any kind of game you want it to be: a dungeon crawler, a survival horror game, a farming simulator, or even a rudimentary MMO. It resonates with people because it’s not quite like anything else, and that’s intended as high praise.

Mojang’s Minecraft is available for Windows, Mac OS X, and Linux for $26.95. Official system requirements have not been published, but the game should run reasonably well on a system with any dual-core CPU, 2GB of RAM, and most DirectX 10-capable integrated and dedicated GPUs.
Tweet
PRINT THIS ARTICLE
Comments Locked