After this morning's Apple event, I've been a constant state of motion. I had the opportunity to finish the iPhone 5 hands on, but there were three other devices of note from today's Apple announcement. The first is the new iPod Touch 5th Gen, next is the iPod Nano 7th Gen, and finally there are Apple's new stock earbuds which they've dubbed EarPods.

Though we were a bit conservative with our iPhone 5 silicon predictions and ended up being off the mark by fingering A5R2 as the most likely candidate, what does get an A5 or A5-derivative SoC is the iPod Touch 5th Gen. This is most likely again the 32nm HK-MG SoC we've seen in the iPad2,4 and Apple TV 3rd Generation. The iPod Touch 5th gen gets a suite of improvements in this refresh, including the same 720p front facing camera as the iPhone 5, and for the first time a decent rear facing camera. The rear facing camera is a combination of the new optical system from the iPhone 5 and a 5 MP CMOS sensor which likely is the same as what was in the iPhone 4. 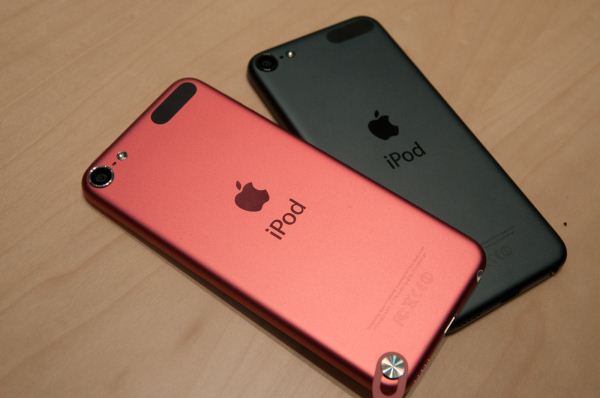 What's really great about the 5th Gen iPod Touch is its construction. The entire device is a single piece of anodized aluminum, and save a small plastic cutout at the top which serves as an RF window for 2.4 and 5 GHz WiFi and Bluetooth, it's an unbroken aluminum shell. The device is also very thin, and feels great in the hand. The only unfortunate bit is that the rear facing camera sticks out of the assembly by about a good 1 mm or so, which seems odd. The new iPod Touch will come in a suite of colors, though interestingly enough the front glass plate color is white on every model Update: except the black model, whose front glass is black (Thanks everyone!).

At the bottom left is a new pop out loop for adding a hand strap, and each iPod Touch will bundle a matching color strap in the box. The circular mount clicks into place, leaving the backside flush if users opt to not use the strap.

In addition, the iPod Touch 5th gen uses the same exact display and display assembly as the iPhone 5. That includes the nearly 100% sRGB coverage, in-cell touch, and 1136x640 resolution. Apple is clearly leveraging an economy of scale between the iPhone 5 and this generation of iPod to make that display affordable.

For Apple, refreshing the iPod Touch with newer silicon is important to keep as close to parity with the highest end development target as possible. The previous iPod Touch was starting to get a bit old with the A4 SoC, and moving to the 32nm version of the A5 has helped things a lot. While playing around with the iPod Touch 5th Gen I didn't find the interface laggy at all, though in taxing things like Maps with 3D buildings it was different from the iPhone 5.

If there's one product in Apple's lineup that has seen constant change and design revisions, it's the iPod Nano, and the 7th generation is no exception. This revision is dramatically changed from the previous generation, and includes a 240x432 resolution 16:9 display with support for video playback. In addition, the display includes full multi-touch support for zooming into stored photos. 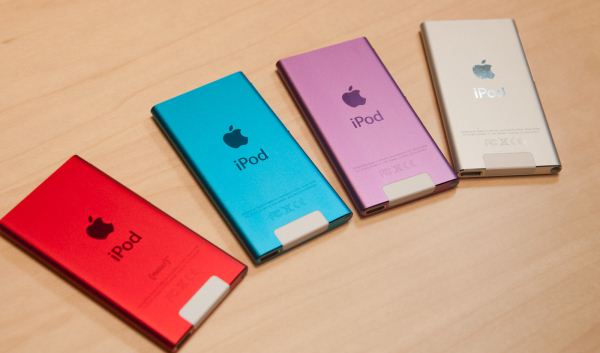 The new iPod Nano also includes Bluetooth with support for A2DP, which is a welcome addition considering the number of A2DP headsets popping up or use with a car stereo. There's also FM with support for pausing and resuming playback, so there's clearly some local buffering being done.

The device is also completely anodized aluminum save a small RF window at the very bottom, and like the iPod Touch will come in a variety of colors. The iPod Nano comes in only one storage configuration at 16 GB.

The third Music-related refresh we saw today were Apple's new bundled earbuds, which they've named EarPods. These will ship with all of the refreshed iDevices in place of the previous generation of earbuds. Apple claims it has 3D scanned and computationally analyzed many ears to determine the optimal size and form factor for this new generation, and the new earbuds have a total of four apertures for producing sound. Interestingly enough there seems to be something to this, as covering an outside aperture with my finger does change sound noticeably. 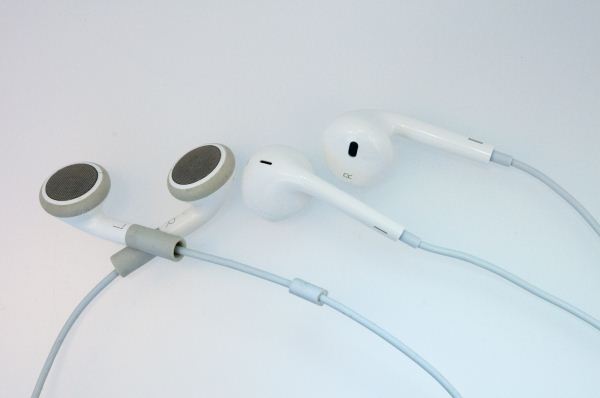 The new EarPods also include the standard microphone and volume / select button controller on the right earpiece cord. Functionally, the EarPods are identical to the previous generation of earbuds, all that's different is improved acoustical performance and a computationally optimized fit for more of the population. 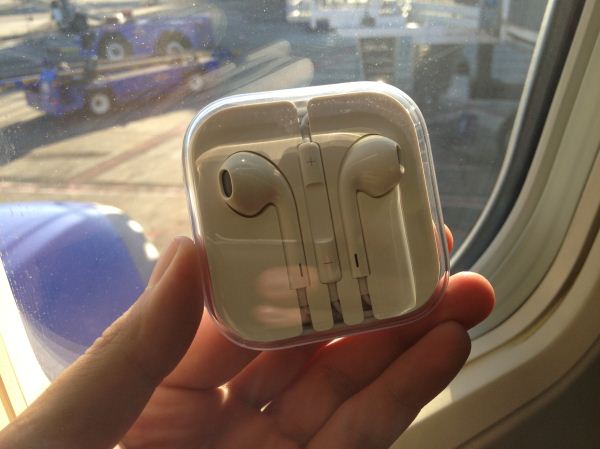 On the way to the demo room, all press was handed a set of EarPods, and they're also on sale now for $29.00 if you're dying to give them a shot. I tried the EarPods in place of my normal in-ears on my flight back, during time spent waiting in the terminal, and after I got home. Turns out they're surprisingly decent.

In the past I pretty much completely disregarded the supplied earphones bundled with iDevices, outside of their occasional utility thanks to the in-line microphone for long conference calls where holding the phone to your face gets fatiguing. I whipped out a pair of the previous generation bundled earbuds and compared a few songs, and the new earbuds indeed fit more comfortably in my ear canal and have noticeably better mids and bass. The previous generation sounds comparatively lifeless and tinny, whereas the new EarPods have a notably richer sound. It still isn't what I've come to expect from my in-ears, and isolation isn't a whole lot better, but for stock kit they're not bad at all. The supplied microphone also works well.

In-ear fit is much more comfortable, as the previous generation's completely circular shape was like shoving a round peg in the idiomatic square hole that is my ear canal. The new ones as of a few hours of wearing haven't caused the same fatigue as I remember the originals resulting in.