The 5big NAS Pro comes in a package similar to the 5big Storage Server. In the box, we have the unit itself, a USB key, a plastic 'key' to lock/unlock the drive bays, a 150 W AC/DC adapter and a single 6ft. Cat 5E LAN cable (we would have liked two, given the dual GbE links in the NAS). 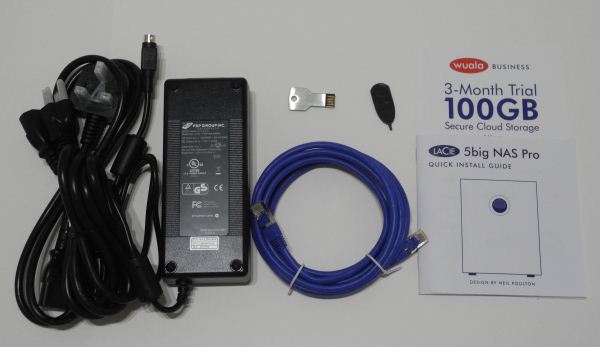 Diskless NAS units often require some sort of setup program running on one of the clients to be able to get the NAS up and running with the proper configuration. For example, Netgear uses the RAIDar utility while Synology has the Synology Network Assistant. On the other hand, some NAS vendors make their unit obtain a DHCP address even when diskless (without waiting for any special setup procedure / timeouts). LaCie adopts an innovative strategy here. Instead of relying on the internal firmware to do this (which might be an issue if that is itself corrupted), LaCie provides a bootable USB key. The rescue disk can also be downloaded from the website and put on the user's own USB drive, if necessary. One needs to simply plug in the key to one of the USB 2.0 ports of the NAS and boot up the unit. After entering the MAC ID of the network interface, the unit can be configured as per the user requirements. Disks can be added and the firmware can be upgraded, amongst other things

LaCie's rescue USB key is an interesting way to tackle the problem of corrupted firmware or diskless configurations. I am sure other NAS vendors will also recognize the advantage to this type of approach. However, we will give LaCie credit for being the first NAS vendor (that we are aware of) to provide such a feature.

Standard RAID setups are fine for scenarios where all the disks are of the same size. However, variable sized disks result in wasted capacity. To address this issue, NAS vendors have come up with their custom solution to maximize disk usage while also providing the required redundancy. Netgear has X-RAID 2 and Synology has the Synology Hybrid RAID (SHR). These custom solutions shield the novice user from the intricacies of understanding the various RAID levels. Now, LaCie has also joined the bandwagon. Their solution is called SimplyRAID, and the features are very similar to that of Synology Hybrid RAID.

LaCie's review configuration of 2x 1TB and 3x 2TB drives would have been an ideal setup to show how SimplyRAID works. However, for today's review, we will just be using SimplyRAID with 5x 4TB disks with a 1-disk redundancy. In this case, there is no difference between RAID-5 and SimplyRAID. We will go into detailed evaluation of SimplyRAID in the second part of our review. The short message is that it is good for LaCie to have a novice-friendly RAID solution similar to its competitors.

The UI of the NAS OS 3 hasn't really changed since the 2big NAS review. Certain additional options are available thanks to the 5-bay and dual GbE link nature of the offering. The available file serving protocols include SMB, AFP, NFS, FTP, SFTP and iSCSI. In today's review, we will be only looking at SMB (CIFS) and iSCSI. NFS evaluation will follow in the second part of the review. An interesting aspect is that each of these protocols can be set to be active on one or both of the network interfaces. However, we set up the network interfaces for link aggregation in our benchmarking. The ability to allow protocols to operate on certain interfaces only provides the network administrator with more control over performance in the bigger scheme of things. A limitation of the FCS firmware will be that only one iSCSI target is available right now. For a mid-range SMB NAS, it is essential that multiple iSCSI targets be supported (particularly since LaCie claims the 5big NAS Pro is suitable for up to 50 users). Fortunately, we were assured that multiple iSCSI targets are definitely in the pipeline. Multiple application services such as Wuala (more on this in the next section), TimeMachine, DLNA server, iTunes, printer server, rsync backup and Download Machine (BitTorrent / HTTP) are available. Access protocols can be enabled on a per-share basis.

Link aggregation can be set up in either load balancing or fault tolerance mode. We used the load balancing mode in our review. Unlike the Thecus N4800, it is possible for the teamed interface to obtain a DHCP address. In addition to Wuala cloud access, remote access over the Internet can also be enabled. Appropriate ports need to be forwarded in the router (the OS does try to set up port forwarding automatically on supported routers in simple configurations). Power management features (including sleep timer for the HDDs and power on/off scheduling) are also available.

On the whole, the UI and NAS OS 3 are functional right away. However, some aspects such as the HDD SMART information reporting and other such details are unavailable in the current beta firmware. We will see whether they are addressed in the FCS firmware in the second part of the review.