Using a Mobile Architecture Inside a 145W Server Chip

About 15 months after the appearance of the Haswell core in desktop products (June 2013), the "optimized-for-mobile" Haswell architecture is now being adopted into Intel server products.

Haswell is Intel's fourth tock, a new architecture on the same succesful 22nm process technology (the famous P1270 process) that was used for the Ivy Bridge EP or Xeon E5-2600 v2. Anand discussed the new Haswell architecture in great detail back in 2012, but as a refresher, let's quickly go over the improvements that the Haswell core brings.

Very little has changed in the front-end of the core compared to Ivy Bridge, with the exception of the usual branch prediction improvements and enlarged TLBs. As you might recall, it is the back-end, the execution part, that is largely improved in the Haswell architecture: 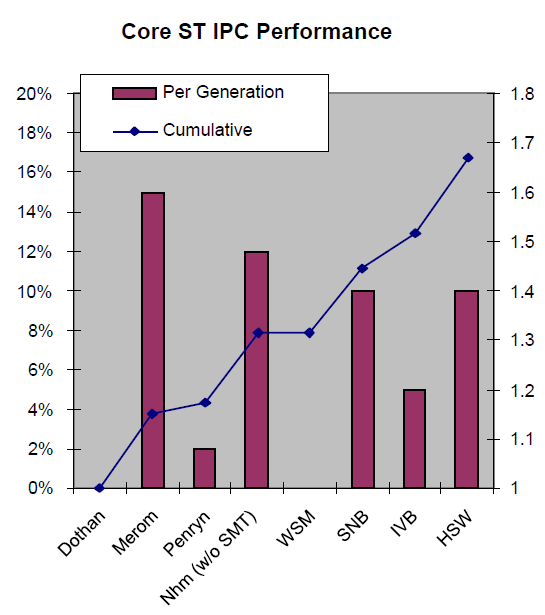 Even better performance improvements can be achieved by recompiling software and using the AVX2 SIMD instructions. The original AVX ISA extension was mostly about speeding up floating point intensive workloads, but AVX2 makes the SIMD integer instructions capable of working with 256-bit registers.

Unfortunately, in a virtualized environment, these ISA extensions are sometimes more curse than blessing. Running AVX/SSE (and other ISA extensions) code can disable the best virtualization features such as high availability, load balancing, and live migration (vMotion). Therefore, administrators will typically force CPUs to "keep quiet" about their newest ISA extensions (VMware EVC). So if you want to integrate a Haswell EP server inside an existing Sandy Bridge EP server cluster, all the new features including AVX2 that were not present in the Sandy Bridge EP are not available. The results is that in virtualized clusters, ISA extensions are rarely used.

Instead, AVX2 code will typically run on a "native" OS. The best known use of AVX2 code is inside video encoders. However, the technology might still prove to be more useful to enterprises that don't work with pixels but with business data. Intel has demonstrated that the AVX2 instructions can also be used for accelerating the compression of data inside in-memory databases (SAP HANA, Microsoft Hekaton), so the integer flavor of AVX2 might become important for fast and massive data mining applications.

Last but not least, the new bit field manipulation and the use of 256-bit registers can speed up quite a few cryptographic algorithms. Large websites will probably be the application inside the datacenter that benefits quickly from AVX2. Simply using the right libraries might speed up RSA-2048 (opening a secure connection), SHA-256 (hashing), and AES-GCM. We will discuss this in more detail in our performance review.

Floating point code should benefit too, as Intel has finally included Fused Multiply Add (FMA) instructions. Peak FLOP performance is doubled once again. This should benefit a whole range of HPC applications, which also tend to be recompiled much quicker than the traditional server applications. The L1 and L2 cache bandwidth has also been doubled to better cope with the needs of AVX2 instructions.