What are the building blocks of a 22-core Xeon? The short answer: 24 cores, 2.5 MB L3-cache per core, 2 rings connected by 2 bridges (s-boxes) and several PCIe/QPI/home "agents". 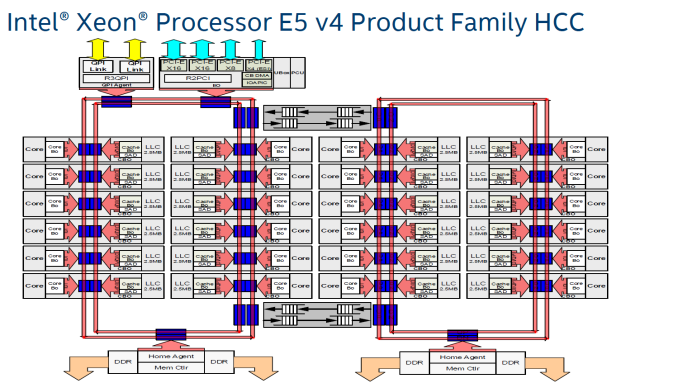 The fact that only 22 of those 24 cores are activated in the top Xeon E5 SKU is purely a product differentiation decision. The 18 core Xeon E5 v3 used exactly the same die as the Xeon E7, and this has not changed in the new "Broadwell" generation.

The largest die (+/- 454 mm²), highest core (HCC) count SKUs still work with a two ring configuration connected by two bridges. The rings move data in opposite directions (clockwise/counter-clockwise) in order to reduce latency by allowing data to take the shortest path to the destination. The blue points indicate where data can jump onto the ring buses. Physical addresses are evenly distributed over the different cache slices (each 2.5 MB) to make sure that L3-cache accesses are also distributed, as a "hotspot" on one L3-cache slice would lower performance significantly. The L3-cache latency is rather variable: if the core is lucky enough to find the data in its own cache slice, only one extra cycle is needed (on top of the normal L1-L2-L3 latency). Getting a cacheline of another slice can cost up to 12 cycles, with an average cost of 6 cycles..

Meanwhile rings and other entities of the uncore work on a separate voltage plane and frequency. Power can be dynamically allocated to these entities, although the uncore parts are limited to 3 GHz.

Just like Haswell-EP, the Broadwell-EP Xeon E5 has three different die configurations. The second configuration supports 12 to 15 cores and is a smaller version (306mm²) of the third die configuration that we described above. These dies still have two memory controllers. 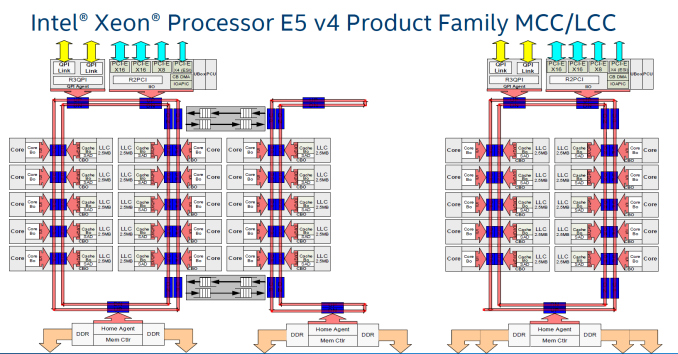 Otherwise the smallest 10 core die uses only one dual ring, two columns of cores, and only one memory controller. However, the memory controller drives 4 channels instead of 2, so there is a very small bandwidth penalty (5-10%) compared to the larger dies (HCC+MCC) with two memory controllers. The smaller die has a smaller L3-cache of course (25 MB max.). As the L3-cache gets smaller, latency is also a bit lower.

The first, Early Snoop, was available starting with Sandy Bridge-EP models. With early snoop, caching agents broadcast snoop requests in the event of an L3-cache miss. Early snoop mode offers low latency, but it generates massive broadcasting traffic. As a result, it is not a good match for high core count dies running bandwidth intensive applications.

The second mode, Home Snoop, was introduced with Ivy Bridge. Cache line requests are no longer broadcasted but forwarded to the home agent in the home node. This adds a bit of latency, but significantly reduces the amount of cache coherency traffic.

On Broadwell-EP, the dice are indeed split along the rings: all cores on one ring are one NUMA node, all other cores on the other ring make the second NUMA node. On Haswell-EP, the split was weirder, with one core of the second ring being a member of the first cluster. On top of that, CoD splits the processor in two NUMA nodes, more or less one node per ring. 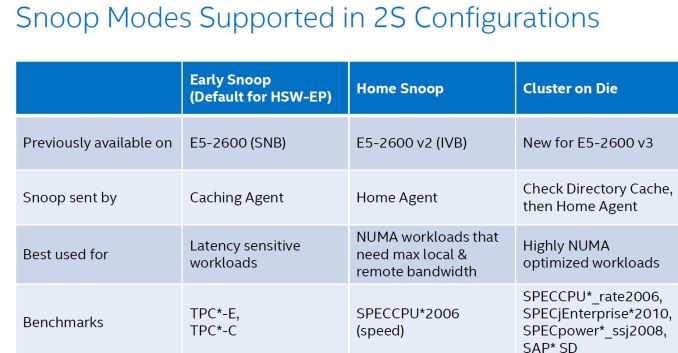 The fourth mode, introduced with Broadwell EP, is the "home snoop" method, but improved with the use of the directory cache and yet another refinement called opportunistic snoop broadcast. This mode already starts snoops to the remote socket early and does the read of the memory directory in parallel instead of waiting for the latter to be done. This is the default snoop method on Broadwell EP. 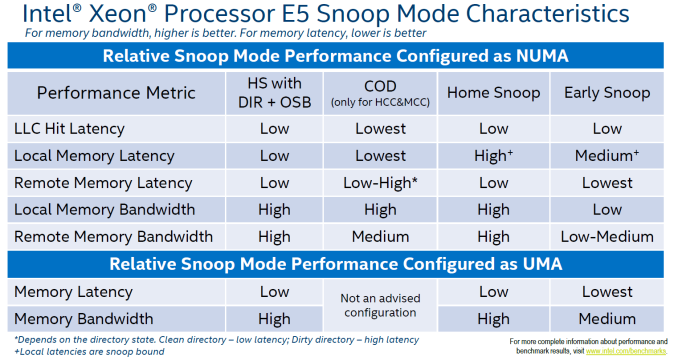 This opportunistic snooping lowers the latency to remote memory. 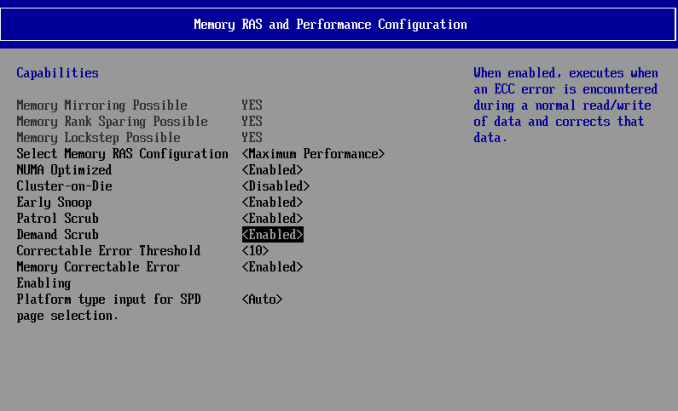 These snoop modes can be set in the BIOS as you can see above.