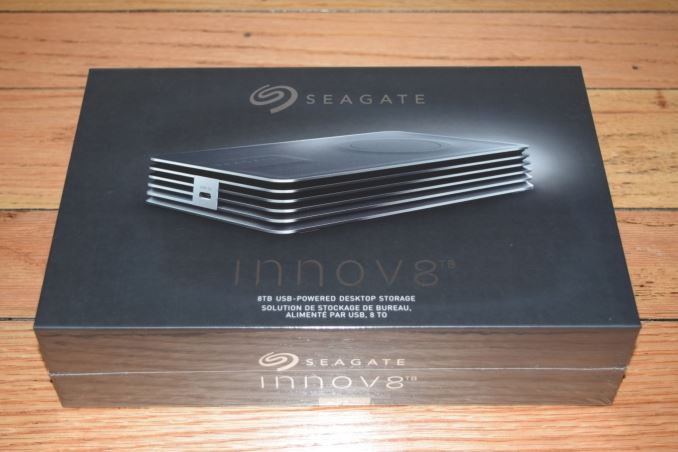 Bus-powered storage devices have traditionally been limited by USB 2.0's power delivery specifications.
The 4.5W limit meant that only 2.5" drives (typically with a spindle speed of 5400 RPM) could be placed
behind a USB - SATA bridge. Last month, Seagate introduced the world's first bus-powered desktop hard drive enclosure. The Innov8 8TB external hard drive uses a Seagate Archive HDD and comes with a USB 3.1 Gen 1 Type-C interface. This review looks at the hardware design of the Innov8, followed by a look at some benchmark numbers and performance consistency test results.

Storage devices that are powered over USB have to make sure not to exceed the maximum guaranteed power available through the port. In the case of early USB 2.0 host ports, only the default power profile (2.5W - 5V @ 500mA) was supported. This meant that even 5400 RPM 2.5" drives behind a SATA - USB bridge had to use a second USB cable just for drawing additional power.

USB 3.0 bumped up the default power to 4.5W (5V @ 900mA). Thankfully, even the USB 2.0 ports on various computers started adopting this profile - ensuring that the traditional 2.5" drives in a SATA-to-USB enclosure could operate with just a single cable. USB 3.1 Gen 2 still maintains the default power delivery at 4.5W (5V @ 900mA), but it has a number of additional power delivery profiles that we will touch upon further down in this review.

Desktop hard drives (3.5") have usually had 7200 RPM spindle speeds. This usually placed the power consumption of the drives under load around 10W, with start-up spikes being much higher. However, the advent of hard drives meant for usage in consumer NAS units and the replacement of tapes with hard drives for archive storage has made 5400 RPM-class 3.5" drives an attractive proposition for hard-drive manufacturers.

Seagate introduced the Archive HDD last year specifically for archive storage. The capacity bump was realized using Shingled Magnetic Recording (SMR) instead of traditional pure Perpendicular Magnetic Recording (PMR) platters. This enables storage densities of up to 1.33TB/platter. Seagate has been using the Archive HDD in the Seagate Backup Plus 8TB External Hard Drive for some time now. The Seagate Innov8 also uses the same drive, albeit with different hardware. 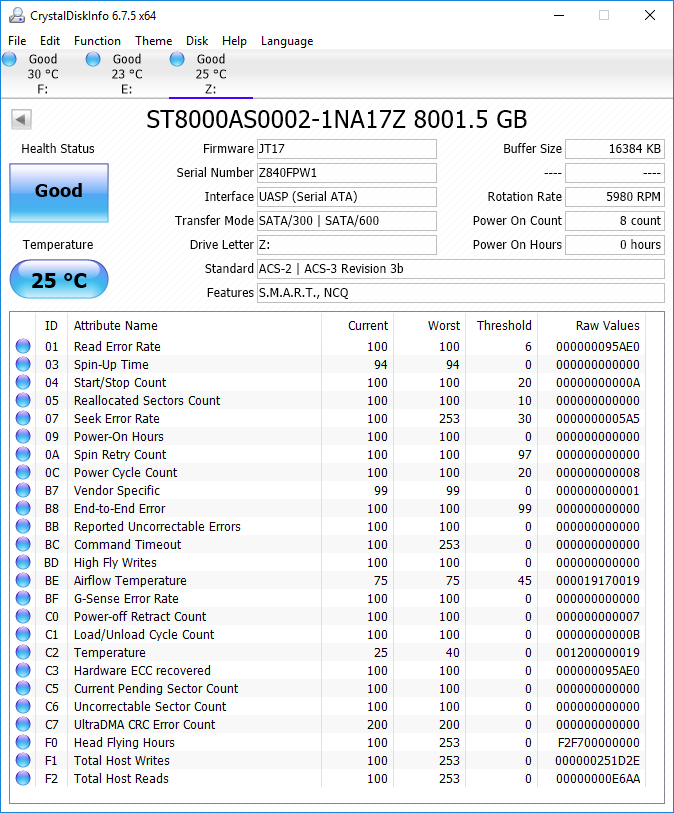 The 8TB Seagate Archive HDD has power numbers ranging from 5W at idle to 7.5W for random reads. This makes it unsuitable for pure bus-powered designs, which is the reason for the Seagate Backup Plus External Hard Drive to come with a separate power adapter. The Innov8 moves to a Type-C interface, and it only bundles a Type-C to Type-C cable - indicating that it is not supposed to be used with a Type-A port.

The Innov8 works with Type-C hosts which advertise Power Delivery of 1.5A or higher. If the host does not advertise 1.5A or greater, the Innov8 will not spin up and will flash an error LED signal.

Given that hard drives have spin-up power requirements that might be much higher than the quoted power numbers (7.5W for random reads in the Archive HDD) in the specifications, and USB ports typically have a hard limit on the power delivery aspect, Seagate's design of the Innov8 is indeed worthy of detailed investigation.

The Seagate Innov8 packaging is indicative of a premium product - a flip top box with a magnetic catch. Inside the package, we have the main unit - a 208mm x 123.6mm x 36mm aluminum enclosure weighing 1.5 kgs. It has six layers around the edges, as shown in the picture below. The feel in hand is quite solid, and the industrial design is praiseworthy. 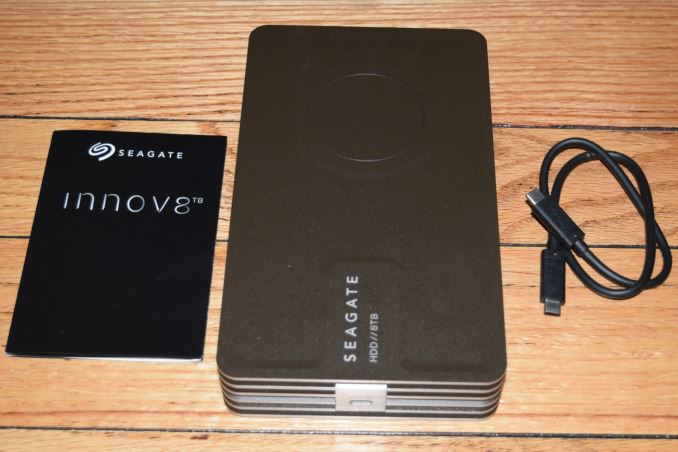 The chassis has no visible screws on the outside, and four small rectangular rubber feet on one end is indicative of the side meant to be the base when placing the unit on a desk. The gallery below shows the various aspects of the chassis design and the placement of the USB 3.1 Type-C port.

Accessing the internals of the unit involves prying open the two sides of the chassis along the two middle layers on the side.

Opening up the chassis reveals a full metal shield with two exposed screws at the USB Type-C port end. These anchor the SATA - USB bridge board to the chassis frame. The screws fastening the Archive HDD to the metal shield are hidden by rubber bushings. The gallery below presents some teardown pictures.

Important internal components to note include the 8TB Archive HDD with a SATA interface (ST8000AS0002) having firmware version RT17 and the 12.0 Wh LiPo (lithium polymer) battery supplying 3.8 V with a 3162 mAh rating. Not pictured in the teardown gallery is the ASMedia ASM1153 USB 3.1 Gen 1 - SATA bridge chip.

The LiPo battery helps handle the spin-up power requirements and whenever the drive needs to consume power higher than whatever is delivered by the USB port. Seagate has helpfully created a marketing name for this battery usage technology - 'Ignition Boost'. Note that the drive is only compatible with Type-C ports advertising at least 1.5A (7.5W). So, the battery is not needed most of the time. In addition, since the Archive HDD doesn't need 7.5W throughout, the battery can get charged using the USB bus power at other times.