The Seagate Innov8 comes pre-formatted in exFAT. We retained the file system along with the contents on it (setup programs for the Seagate Dashboard and a warranty document PDF) for benchmarking purposes. In order to evaluate the DAS aspect of the unit, we utilized the testbed outlined in the table below to test the performance. One of the USB 3.1 ports enabled by the Intel Alpine Ridge controller was used to connect the unit to the system.

Our testing methodology for DAS units takes into consideration the usual use-case for such devices. The most common usage scenario is transfer of large amounts of photos and videos to and from the unit. The minor usage scenario is importing files directly off the DAS into a multimedia editing program such as Adobe Photoshop. Prior to taking a look at the real-life benchmarks, we first check what ATTO and CrystalDiskMark have to report for the Seagate Innov8. We see numbers around 200 MBps for sequential transfers, correlating well with Seagate's performance claims. 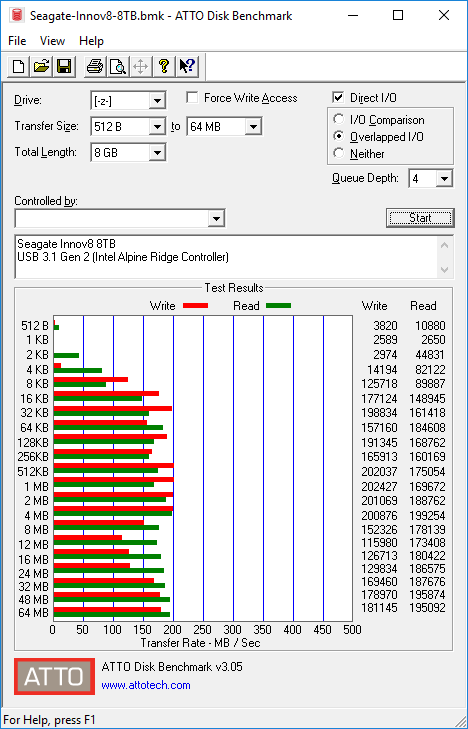 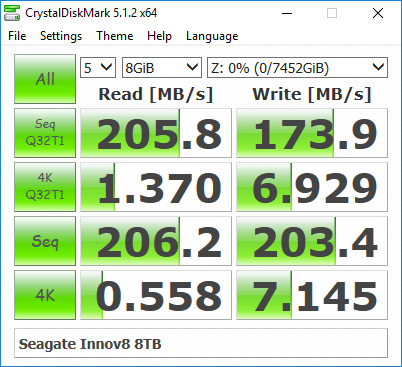 In order to tackle the first real-life use-case, we created three test folders with the following characteristics:

These numbers show the unpredictable nature of the performance of the drive. It is not only the DRAM cache (that usually delivers predictable changes in performance beyond a certain amount of data), but, also the distributed media cache on the SMR drive that influence the write speeds. Reads are affected quite a bit if they happen to involve data that is currently being subject to 'garbage collection' - i.e, moving from one portion of the drive / cache to a more permanent location in the platters.

Usually, PC Mark 8 reports time to complete the trace, but the detailed log report has the read and write bandwidth figures which we present in our performance graphs. Note that the bandwidth number reported in the results don't involve idle time compression. Results might appear low, but that is part of the workload characteristic. This is not the intended use-case for external hard drives, but the results are just presented here for the sake of completeness.

Seagate explicitly mentions that the Innov8 is not compatible with USB ports delivering less than 7.5W of power. Taking the safe route, they don't advertise compatibility with any Type-A ports. However, we got curious and decided to use a Type-A to Type-C USB 3.1 adapter cable and check with the other USB ports in our DAS testbed.

Surprisingly, even the USB 2.0 ports on the GIGABYTE motherboard in our testbed are able to supply the 7.5W minimum power required by the Innov8. 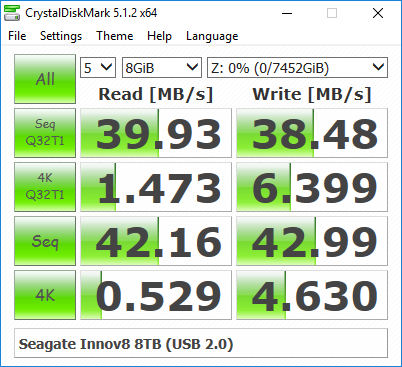 Our rough benchmarking (CrystalDiskMark only) with the USB 2.0 port shows that sequential transfers have no problems in saturating the USB 2.0 bandwidth.