Of course, the display doesn’t make a phone, so in the interest of trying to present more information to someone that might be pre-ordering the phone today, I also went ahead and ran some initial battery life tests. Battery life is arguably the most important part of any phone, so we’ve made some serious efforts to improve our testing here even more than before. As discussed in previous articles, our new web browsing test for 2016 brings a new suite of web pages that more realistically represent what people are viewing today, and adds a scrolling component that adds a steady state load to test the display pipeline in addition to CPU governors/schedulers and their ability to react appropriately to these loads. In order to properly test devices in comparable workloads, we attempt to disable all background tasks and target 200 nit display brightness in order to give a good idea for what relative battery life will be for an average user. 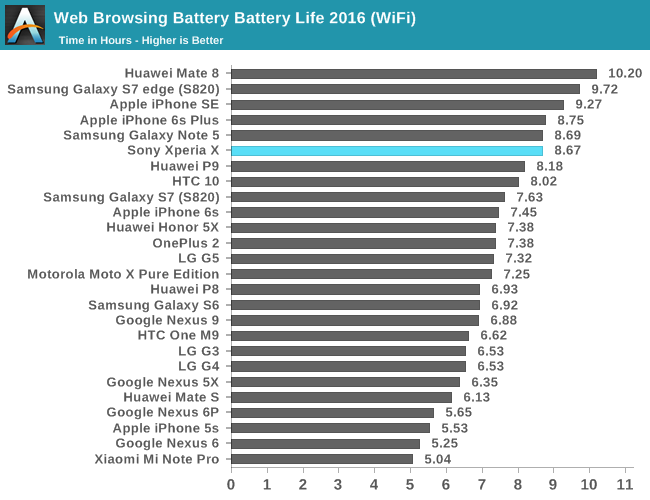 Given the 28HPm SoC and 10.09 WHr battery, you might think that the Xperia X would perform horribly on our tests, but in practice the Xperia X is actually an excellent performer in our web browsing tests. Of course, we still need to collect more data to see exactly how it performs, but this test tracks fairly well with experiential battery life as it provides a fairly significant CPU and network load rather than a purely display-bound one.

However, before I get into results it’s worth covering exactly what settings we’ve chosen for this test, and why as I’ve increasingly seen quite a bit of confusion over how we get the results that we do. By default, Androbench 4 is using relatively ridiculous settings. For example, for sequential reads and writes it uses a 32MB block size when the average sequential read/write is more like 256KB or 512KB. It also sets 8 IO threads by default, which to some extent is unreasonable because such a test setting is really mostly designed to favor storage with a UFS controller and using such aggressive settings can actually have a detrimental effect on eMMC performance due to resource contention issues. In general, it also may not make a lot of sense to implement multithreaded IO in programs as single-threaded IO is going to be simpler to implement and in general more likely to be used in real programs. 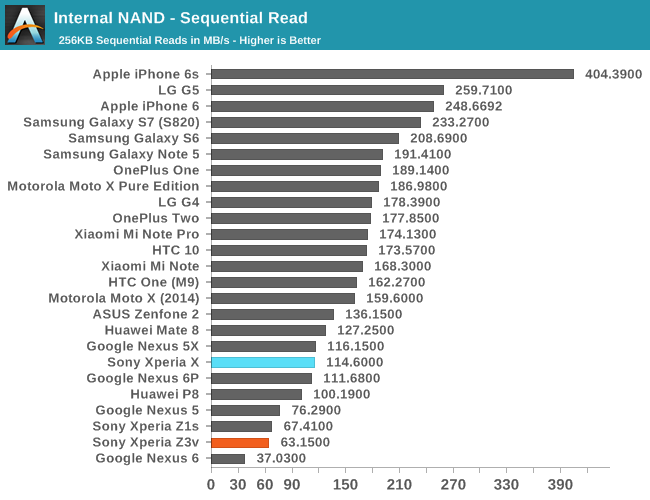 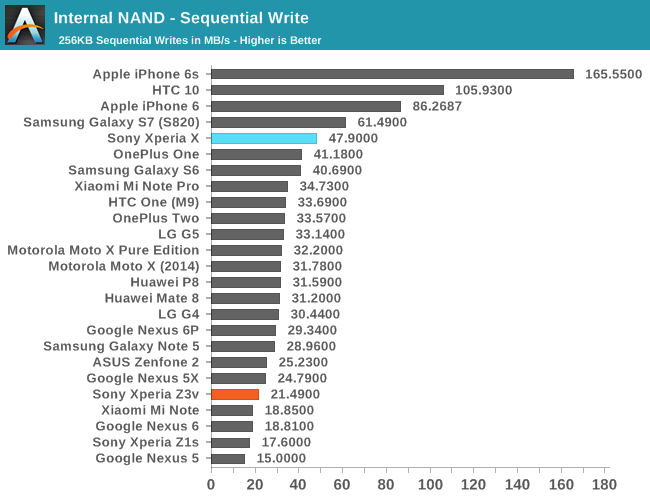 Now that we’ve gone over the test conditions, we can look at the actual storage performance, and storage performance is honestly at least slightly disappointing when Xiaomi and other OEMs are shipping significantly faster storage in phones that are hundreds of dollars cheaper. Sony is using Toshiba eMMC of some sort, but I wasn’t able to figure out exactly what it was as the model name isn’t anything that shows up on Google. Of course, it’s possible for a phone to end up being faster than expected despite differences in storage performance, but this sort of cost cutting is concerning when pretty much all of the high-end phones in the market are shipping solutions that are clearly faster regardless of protocol and storage standard.

Overall, the results I’ve seen so far from the Xperia X are concerning. The asking price is well within range of a flagship smartphone, but I’m just not seeing where the phone can justify its asking price so far. I don't really have anything against Sony here, but I'm definitely feeling let down given the praise that I've often seen around Sony phones. The phone is good in some ways, but it's almost unacceptable in others. 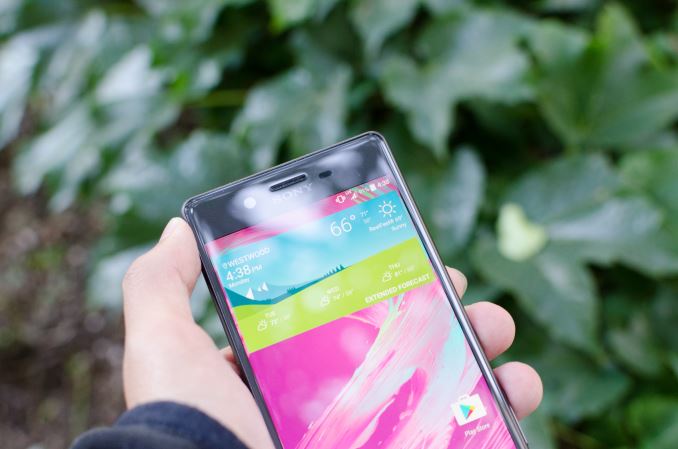 To try and explain what I mean, we can start with the display. It's clearly high quality because the display has a fairly impressive gamut for an LCD, and both peak brightness and contrast are quite respectable. Viewing angles are also excellent and the display is laminated quite closely to the cover lens to give the impression that the display is almost painted on the glass. However, the poor calibration really sours the whole experience because just about everything looks wrong on the phone, whether it's logos and UI elements or photos and videos. I'm not sure whether other reviewers just didn't notice or overlooked these issues, but it's a significant issue for me and it's evident to me that this problem has been ongoing for multiple generations now. 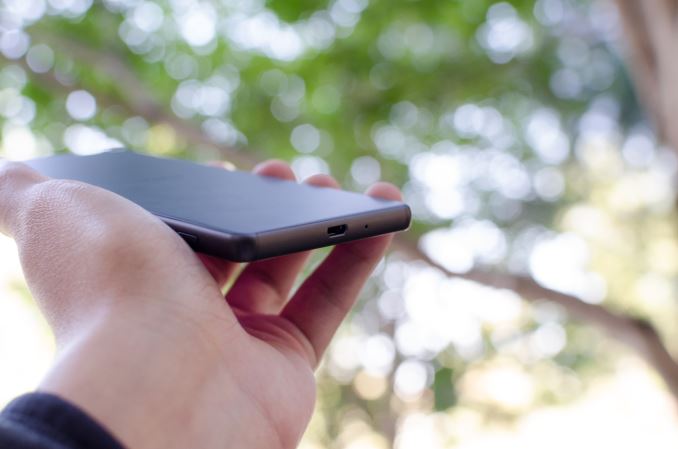 Another major concern for me is storage performance, as it appears to be below what we’d expect for a phone of this time and price as well. To some extent I'm willing to give a pass to the HTC 10 for using an eMMC solution because it isn't a clear-cut case of cost-cutting in the hopes that no one would notice, but in the case of the Xperia X it's really quite obvious that performance lags behind the competition. Of course, it'll take some Discomark testing to see just how much of an impact there really is, but this kind of component selection is concerning to some extent. 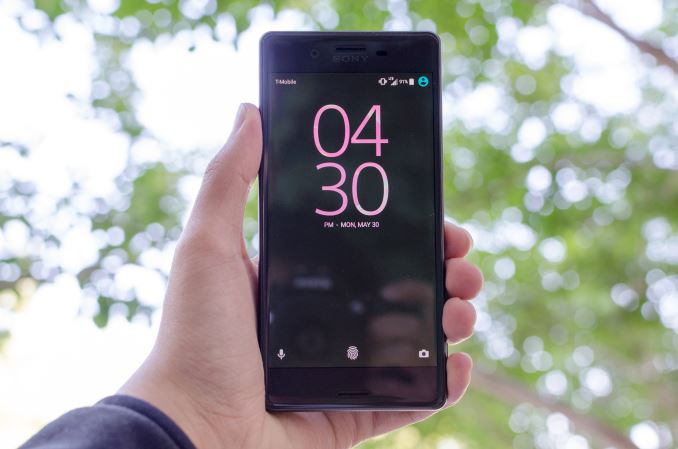 However, there are some silver linings to be found. In the case of battery life, the Xperia X appears to be noticeably above par, on the order of 10-15%, which just goes to show that battery size cannot be used to approximate battery life when comparing between devices. It's actually quite impressive to see how Sony is getting so much battery life from a relatively small battery, and I suspect that a combination of the Snapdragon 650 and efficient display goes a long way here. Sony definitely deserves credit here for shipping a phone with such high battery efficiency.

Despite such silver linings, I still think it's too early to deliver a definitive verdict on the Xperia X. I like parts of it quite a bit, but other parts are concerning to say the least. To really weigh all of these things and see the balance will require a full review, which should be forthcoming in the near future.