Hypersonic PC is a fairly little known PC vendor based out of New York that specializes in producing top-of-the-line desktop and notebook solutions for use in gaming, DV editing, and CAD environments. Like the more well known Alienware band, Hypersonic PCs target high budget consumers looking for powerful systems in visually pleasing homes. With an extremely fast desktop processor and a unique paint design, the Hypersonic Sonic Aviator notebook we got the chance to take a look at is certainly targeted at a fairly niche market; a market that interests many AnandTech readers.

The Hypersonic Sonic Aviator is actually based on an OEM notebook solution that we have seen a number of other vendors use, including Alienware. We are not certain which Taiwanese manufacturer is producing these notebooks for resale in the US market but you can be certain it is one of the major OEM producers (ASUS, AOpen, FIC, ect). This practice, of third party OEMs selling units to various distributors in the United States, has been going on for ages now and forces US vendors to distinguish their unit from the competition which is exactly what Hypersonic does. A glance at our sample Hypersonic Sonic Aviator shows that the system is anything but ordinary visually. 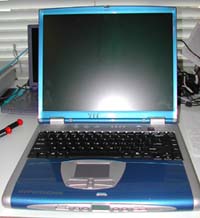 Partially to distinguish the system from others based on the same platform and partially to produce a visually pleasing system in line with the other Hypersonic PC solutions, the Hypersonic Sonic Aviator comes standard with a coat of high quality car paint over the outside surface. Our test system came with the metallic blue paint scheme which looked and felt absolutely wonderful; color was brilliant and the paint gave the system a soft feel. The unit is painted with 3 paint layers and 4 clear coat layers to protect against damage. We were a bit considered when we first saw the Sonic Aviator that scratching would be a problem, but after some fairly extensive use (including rides in back packs and carrying cases) our unit remained mostly scratch-free. The system is also available in a metallic omniscient red, color shifting metallic gold/magenta, or the color from any car model year 1995 to present for $100 extra. Always wanted a notebook in Ferrari red? Now is your chance.

The areas of the notebook that do not get paint treatment, including the bottom and side of the system, remain the the stock gray color. Overall, the colors of the system blended quite nicely to produce a visually pleasing computer that got complements on a number of occasions.

The screen on the Hypersonic Sonic Aviator is opened by sliding the release lever to the right. Lifting up the screen and opening the notebook reveals a beautiful 15" display that is available in SXGA+ (1400x1050) or, for $99 more, UXGA (1600x1200) configurations. The screen of the Sonic Aviator demonstrates attention to detail as even the screen border is painted with the selected paint. Our unit came with the SXGA+ screen which performed along the lines of other SXGA+ LCDs we have seen on laptop systems.

Hiding under the 15" LCD is the Hypersonic Sonic Aviator's full sized keyboard. The keyboard proved to be similar to other full sized keyboards seen on notebook systems but featured translucent keys which positively added to the overall appearance of the system. The far right column of the keyboard was reserved for the home, page up, page down, and end keys while the arrow keys found their home on the bottom right.

The Hypersonic Sonic Aviator is outfitted with a fairly standard touchpad. One item we were glad to see were the dedicated scroll up and scroll down buttons located between the left and right keys. We have criticized other vendors for not including these very useful buttons on their touchpad and therefore we more than happy to find them on the Sonic Aviator. The left and right mouse buttons on the Sonic Aviator were shaped a bit atypically but proved to be easy to use. Like other touchpads, the touchpad on the Sonic Aviator is located slightly off center towards the left side of the system. This is done to account for the left shift in hand position thanks to the right function home, page up, page down, and end keys.

Mounted on the screen above the function buttons are three more status LEDs which are visible both while the screen is open and when it is closed. These LEDs indicate power state (green for on), battery state (orange for charging, green for charged), and mail status (can be configured to glow green when unread e-mail messages arrive).

The speakers on the unit are located on the top right of the case, a fairly typical location that proves to be effective at producing sound without being blocked by the user's hands.