In our overview of Q2 2016, we mentioned that shipments of higher-end graphics processors were growing, whereas sales of mainstream GPUs were declining in the recent years as a result of major improvements of AMD’s integrated graphics and Intel’s iGPUs. In particular, sales of enthusiast-class adapters hit 5.9 million units in 2015, which was a record. This year is not that good for expensive graphics cards, but shipments of gaming-grade desktop GPUs are still very high. 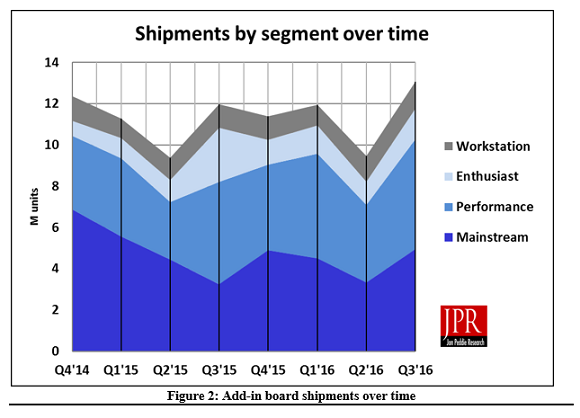 Sales of enthusiast-class desktop AIBs in Q3 2016 were considerably lower than sales of enthusiast-class standalone desktop GPUs in the same period a year ago. Nonetheless, we are still talking about around ~1.5 million units, which seems to be higher than what we have seen historically. Moreover, since JPR considers everything that costs between $250 and $900 as “enthusiast”, it is obvious that unit shipments do not necessarily reflect revenues earned by AMD and NVIDIA. Moreover, since AMD and NVIDIA officially sell the Radeon RX 480 and the GeForce GTX 1060 for $249 and demand for these products (which performance is on par with much more expensive predecessors) was probably very high during the quarter, it is likely that some of the “enthusiast” buyers were classified as “performance” ($249 and below) buyers in Q3 2016.

Despite the fact that shipments of higher-end standalone video cards dropped year-over-year (YoY) in the third quarter, gaming-grade graphics adapters (enthusiast + performance) hit around seven million units. The industry still supplied over five million of mainstream boards in Q3, which is quite a lot. Nonetheless, performance and enthusiast-class desktop AIBs have been outselling mainstream graphics cards for five consecutive quarters now.