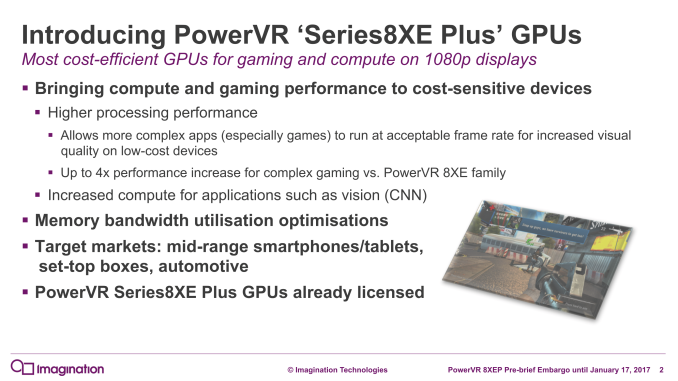 Over the years the PowerVR team over at Imagination has settled in to a rather comfortable release cadence for GPU designs. Every year since the Rogue GPU architecture was initially announced in 2012, the company has released an updated versions of the architecture and/or new GPU designs around the start of the year. Last year’s focus was on high space efficiency with Series8XE, and now for 2017 Imagination is back once again, this time with the aptly named Series 8XE Plus, a new set of GPU core designs specifically for going after the midrange market for 1080p rendering.

The launch of the Series8XE Plus family comes as the IP designer has managed to regain better footing in the SoC GPU market. The company has offered the XT and XE lines of GPUs for a few years now, and both have been successful for different reasons. XT of course is the heart of Apple’s A-series SoC GPU designs (albeit not too many other high volume designs), and meanwhile the XE family has become Imagination’s workhorse for the broader market. In terms of the total number of licenses, the high efficiency branch of the Rogue architecture has now become the most successful GPU line for the company since the OpenGL ES 1-era MBX family of the mid-to-late 2000s. As a result, the company is keen to further expand on the family and its success to give their customers what they want. 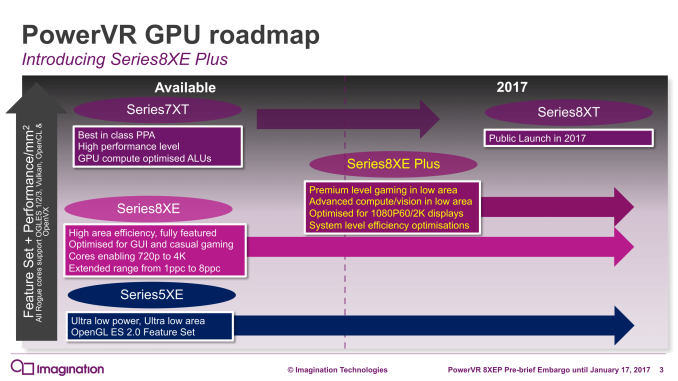 In terms of design then, Series8XE Plus is intended to fit in the performance gap left between the original Series8XE at the lower-end and Series7XT at the top. The two 8XE SKUs that Imagination introduced last year – the GE8200 and GE8300 – were aimed at the low-end of the market, where fillrate is king. As a result these parts can push a good number of pixels, but only with a limited amount of shading. PowerVR Series8XE Plus then can be best thought of as a rebalancing for the mid-range market, targeting the same fillrates but significantly increasing the number of ALUs paired with that hardware, for more compute throughput in all of its forms. 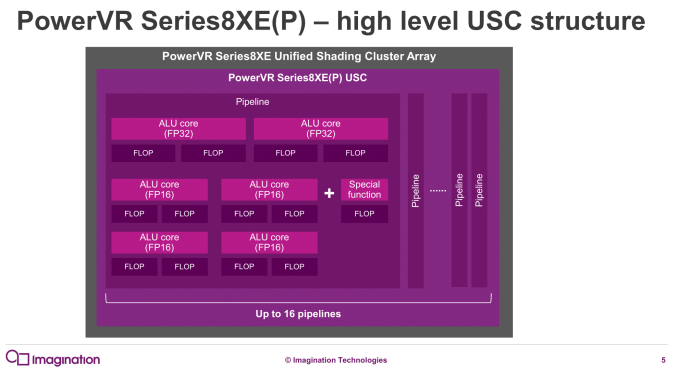 Architecturally, 8XE Plus is not a significant departure from 8XE, nor would you expect one given the one-year turnaround time and the “Plus” nomenclature. The 8XE Plus USC is identical to the 8XE USC, with the same arrangement of ALUs and pipelines leading to the same basic throughput. Nor have the ROPs (pixel co-processor), the data masters, or the non-core (hardware virtualization and such) features changed. What has been updated is the memory interface and adjacent links: Imagination has tweaked them to match modern LPDDR4 data burst sizes, as LPDDR4 doubles the amount of data fetched per memory clock. This is very similar to what Imagination did with 7XT Plus back in 2016, as LPDDR4 prices have reached a point where the newer memory is appearing in midrange devices. 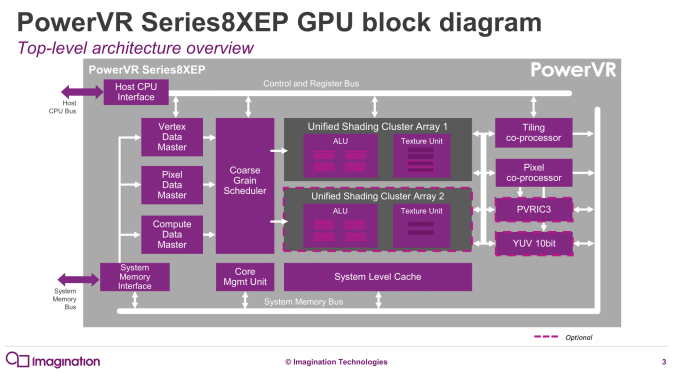 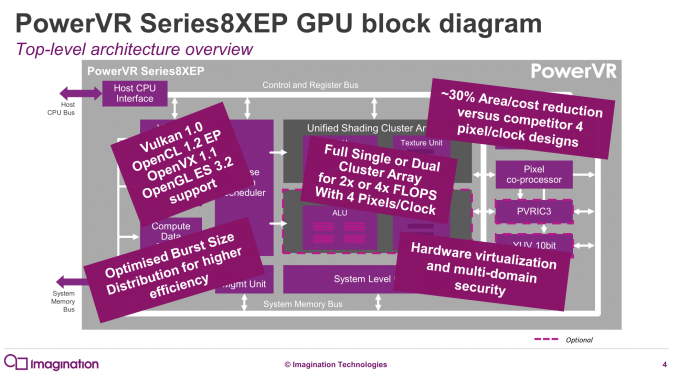 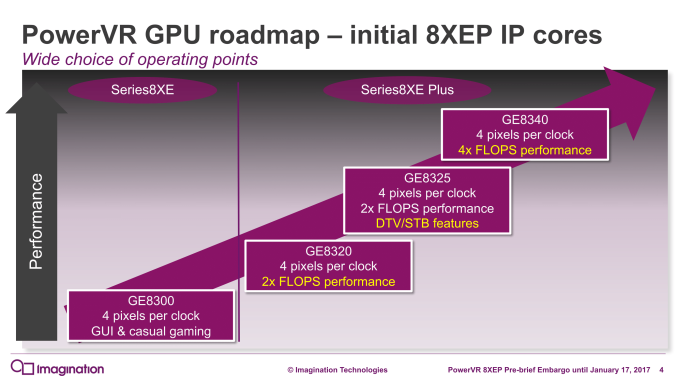 Clockspeeds aside, per-clock the new 8XE Plus designs are now in the lower-bound of the 7XT’s performance range. Though this means that 8XE Plus steps on 7XT’s foot a little bit, there’s still a rather big distinction between the two. Whereas 7XT is focused on performance first and foremost (including energy efficiency to sustain that), 8XE Plus remains focused on die size and performance per unit thereof. And of course, 8XE Plus still takes a features-light approach to keep die size down.

For Imagination, the ultimate goal of these new SKUs is to better serve the midrange market. The company is expecting 1080p displays to increasingly replace 720p displays in this market over the next few years, and while the company already has designs like the GE8300 to serve this market, that sole SKU made for a one-size-fits-all approach. As a result Imagination has rolled out the 8XE Plus SKUs to give vendors a selection of 1080p-appropriate GPUs across a wider range of performance levels to suit their needs. 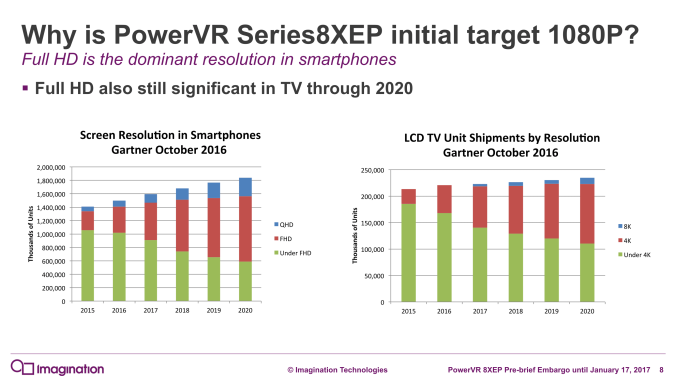 The focus on FLOPS and shading performance this time around is, in turn, based on where Imagination sees customer needs over the next few years. As with the PC space, display resolutions are slow to increase while the amount of work per pixel is much more quickly increasing, which means shader throughput needs to grow more rapidly to match. Consequently, for 8XE Plus, Imagination has doubled/quadrupled the peak shader throughput to match those needs.

Meanwhile, though perhaps not the core market for it, Imagination is also looking to grab a bigger piece of the growing VR and AR markets. Even the GE8300 was workable for the most basic Google Cardboard VR experience (e.g. 360 degree videos), but little else. The newer 8XE Plus designs in turn are meant to offer a lot more shader performance so that the hardware can keep up with rendered graphical effects such as AR overlays. 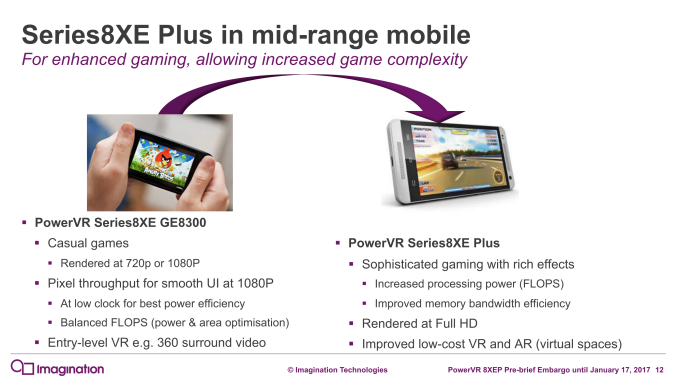 Moving on, while API support hasn’t changed with this release – Imagination likes to tout OpenVX 1.1 compatibility for 8XE Plus, though this is available to all Rogue products – the company is expecting customers to make much greater use of GPU computing over the next few years. We’ve already seen some of this on the high-end with things such as Apple’s facial recognition and image grouping features in iOS 10, and these kinds of features will trickle down over time. As a result phone manufacturers will need more powerful GPUs in order to do this kind of computer vision processing, and this in turn is closely tied to overall GPU compute performance. 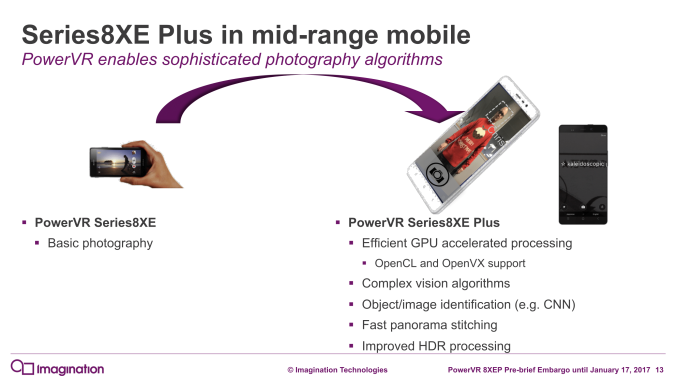 Finally, expect to see the new 8XE Plus designs crop up under the hood of the usual consumer electronics devices. Imagination is trying very hard to wrest a bigger piece of the TV and STB market from ARM – whose Mali-4xx designs have done very well – and the 8XE Plus is a big part of that. Similarly, they are also looking to push further into the ADAS/automotive infotainment markets, where 8XE Plus will offer more compute performance for features such as more complex dashboard designs.

While the bulk of Imagination’s focus in today’s announcement is on the new Series8XE Plus, the company is also unveiling a pair of new Series8XE designs today. These are the GE8100 and the GE8430. 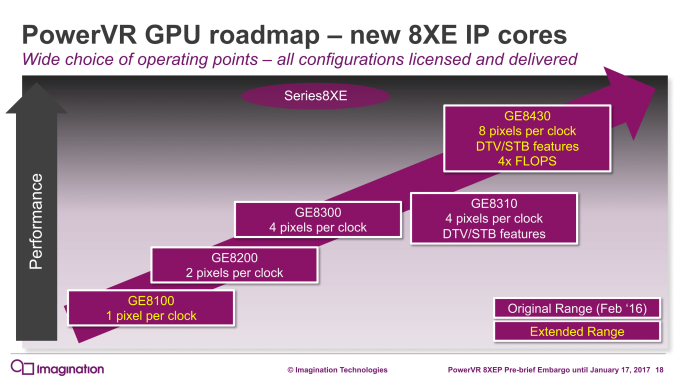 These new parts follow the fillrate-first mantra of the 8XE line, while extending it above and below the original 8XE parts introduced last year. The GE8100 is a new low-end part pushing a single pixel per clock – essentially half of a GE8200 – and while not explicitly labeled as such, I suspect this will replace the G6020 as the PowerVR GPU design of choice for wearables and other sub-HD resolution devices.

Meanwhile at the high-end is the GE8430, which not to be confused with the GE8340 further scales up the 8XE family with a larger-site 8 pixel per clock design. GE8430 appears to primarily be a play at the 4K market, offering an abundance of ROP throughput (and decent enough compute throughput for the resolution) to drive 4K TVs and set top boxes. Not surprisingly then, Imagination is also including some additional TV/STB functionality that isn’t a core 8XE feature.

As with the other 8XE parts, Imagination’s value proposition here is that they believe they offer better fillrate per mm2 (and therefore, overall performance per mm2) than competing designs. And while we can’t verify these claims, certainly area efficiency has by far been the biggest draw for the XE GPU families over the last few years. 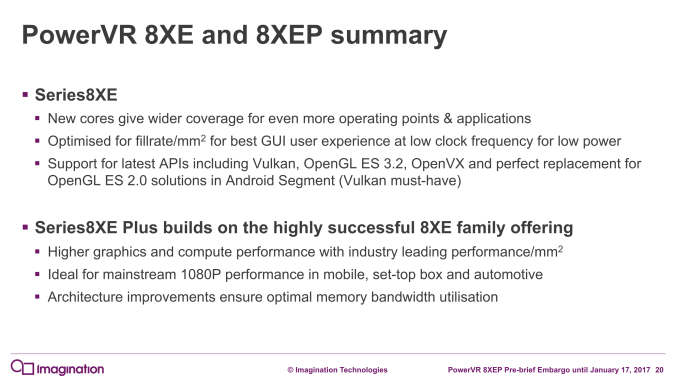 Wrapping things up, although Imagination does not announce when to expect SoCs utilizing their designs to hit the consumer market, they have already begun to line up licensing deals for their new GPUs. Given the shorter turnaround time of the XE family, I’m expecting we’ll see these designs start appearing in retail products by the end of this year.