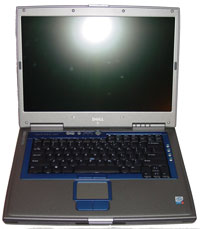 For those looking for a large amount of workspace or that extra kick for watching movies, the 15.4" WUXGA (1920x1200), which is the option we personally prefer, won't disappoint you. To be specific, the 15.4" WUXGA provides 20% more desktop surface than a typical 15.4" UXGA, and with UltraSharp LCD technology, the 15.4" WUXGA gives us wider and clearer viewing angles.

In order for Dell to fit the 15.4" panel on the Inspiron 8600, the notebook has a wider berth that we have yet to see many other notebooks surpass. Traditional notebooks have been square or at least near square in design, but with the wide screen panel, the Inspiron 8600 basic form is rectangular (3.3 inches greater in width than length). This gives the 8600 plenty of surface space to spare and carries over to keyboard layout.

Overall, Dell has gotten the keyboard down right. The rectangular form has given Dell plenty of surface space with which to work, and the 8600 is equipped appropriately with a full-sized keyboard. The control key is at the correct place on the keyboard (bottom left corner) and included dedicated arrow keys. The keyboard feels fairly standard, which we found to have a good response and a tactile feel.


Since the notebook is offered as a multimedia platform, Dell has appropriately designed a few multimedia hotkeys for quick access. While the function key on the keyboard takes care of this for other notebooks, the dedicated keys provide simplified support.


There are two methods to which mouse input is supplied, dubbed the “DualPoint” integrated pointing device. Like the Latitude D800, the “DualPoint” input system comprises of a touchpad and a track stick. The set of buttons for the touchpad are reasonably responsive, but we found the set for the track point a bit fickle. We would have liked to have seen a bit more response in them when we pressed down to enable a click. Still missing is a scroll button of sorts. This is also missing from the Inspiron 8500 and the 8200, which the 8600 succeeds. 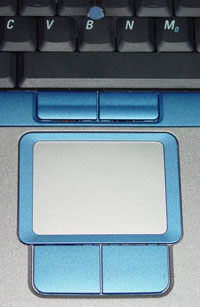 There are four status LEDs on the monitor hinge. This is a good placement for the LEDs because it maintains visibility even when the monitor is closed, which provide status information on power, hard drive activity, battery state, and Bluetooth status. Additionally, this placement negates the need for an extra array of LEDs specifically to be visible when the monitor is closed. We especially liked the fade on the power and the battery state LEDs when they changed status. Instead of the light abruptly going on and off, the light would do a simple fade, which we found to add that little something extra.

Additional status LEDs are located above the keyboard and indicate key status (num lock, caps lock, and scroll lock). The system's power button is located to the right of the LEDs, and to the left is the mute button followed by a volume up and volume down button, which should come in handy when you are playing movies. The little divot above the caps lock (the middle LED) is actually the system microphone. This is a good placement in terms of keeping hands away from creating the unwanted rustling noise, but it also leaves it a bit too far away from the sound source (our mouth).

When the screen is visible, the 8600 exposes two of its cooling vents. The first of the two is located towards the back of the system, near the monitor, and to the left of the keyboard. This brings in cool air for the CPU fan, which lies directly below. The second vent is barely visible and is located directly below the monitor along the gap between the monitor and the system (between the two hinges). This is an exhaust vent for a second cooling fan that is for a separate component, which we will cover later on.