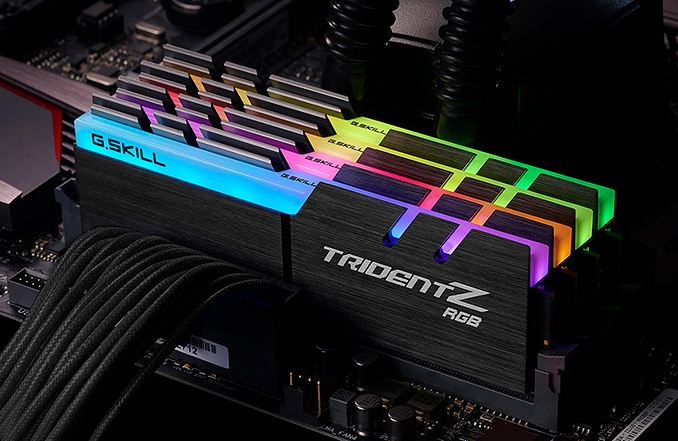 G.Skill has announced a new series of high-end 16 and 32 GB DDR4 kits for Intel’s Coffee Lake processors. Following in the footsteps of other vendors who have announced similar highly clocked 32 GB kits, the new G.Skill DDR4-4000+ kits offer 2 and 4 matched DIMM sets with high frequencies and CL17 timings. The new Trident Z RGB modules require a high-quality Intel Z370-based motherboard that can deliver “clean” power to them as well as a processor that can handle both high frequencies and relatively low latencies.

When we first encountered G.Skill’s Trident Z memory kits for Intel’s Coffee Lake/Z370 platform earlier this year, we noticed that the company relaxed their tRAS sub-timings when compared to DIMMs designed for Intel’s X299 platform. Much to our surprise, the new low-latency Trident Z RGB DDR4-4000+ 32 GB kits shrink all the timings rather considerably compared to the company's other high-speed DDR4 kits. In fact, the new Trident Z RGB modules offer the lowest latencies among all DDR4-4000+ kits announced to date. Apparently, at least some of Intel’s latest desktop CPUs can handle not only extreme data transfer rates well beyond DDR4 specs, but also can do so with CL17 timings, albeit with a 12.5% –20% overvoltage and G.Skill’s tinkering.

To validate its Trident Z RGB DDR4-4000+ CL17 kits, G.Skill uses Intel’s Core i7-8700K CPUs as well as ASUS’ ROG Maximus Hero motherboards. Like other highly clocked 4 DIMM kits announced this fall, this comes with the caveat that not all Coffee Lake processors can handle ultra-fast memory modules in a 2 DPC configuration. Therefore, to take advantage of G.Skill's DDR4-4266 CL17 kit one is going to need some luck. At the same time, the company claims that hitting 4000 – 4266 MT/s is not very difficult on modern platforms and processors that can handle such speeds are not too rare (but a good cooling system is a must  due to DRAM overvoltage). 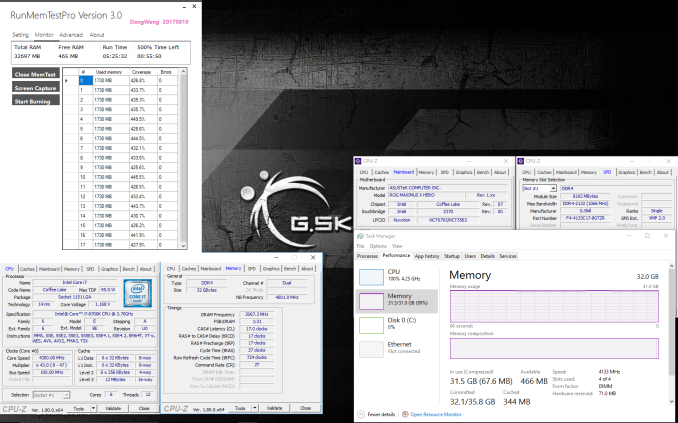 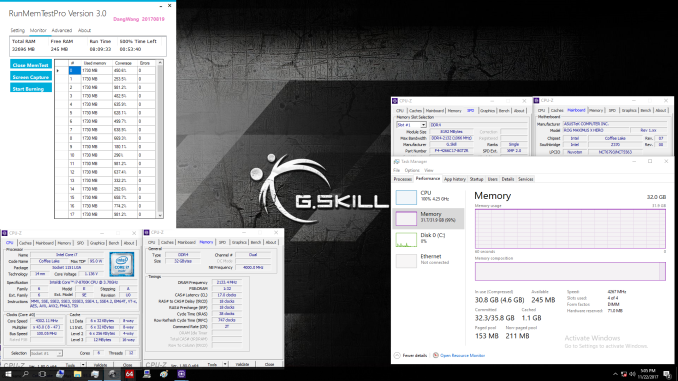 In addition to its low-latency DDR4-4000+ CL17 kits for Intel’s Coffee Lake/Z370 platform, G.Skill has also introduced the absolutely fastest 32 GB DDR4 kit to date that is rated to run at 4400 MT/s with CL19 19-19-39 timings and 1.5 V. The kit naturally requires a high-end Z370 motherboard and a pre-binned CPU with a memory controller that can support such data transfer rates.

With the addition of all the latest kits that G.Skill introduced in the recent weeks, the company’s lineup of modules for Coffee Lake/Z370 platform now looks as follows:

G.Skill plans to start sales of its Trident Z RGB DDR4-4000+ CL17 kits for Intel’s latest platform in January 2018. The manufacturer never touches upon MSRP of its high-end modules in press releases, but expect the new products to be priced well above average dual-channel kits. In the meantime, the fastest Trident Z RGB 32 GB dual-channel kit that can be ordered now is rated for DDR4-4000 CL18 and costs $649.99 (at press time, it was out of stock at Newegg).