ASUS made quite a ruckus when it launched its flagship ROG G703 “Chimera” laptop last November. The gaming notebook not only featured a 17.3-inch display panel featuring a 144 Hz refresh rate, but also came with both the CPU and GPU factory overclocked. This week, less than half of a year after the launch of the original ROG Chimera, ASUS in introducing an improved ROG G703 featuring a higher-performance CPU, a new display panel, and a faster storage sub-system. 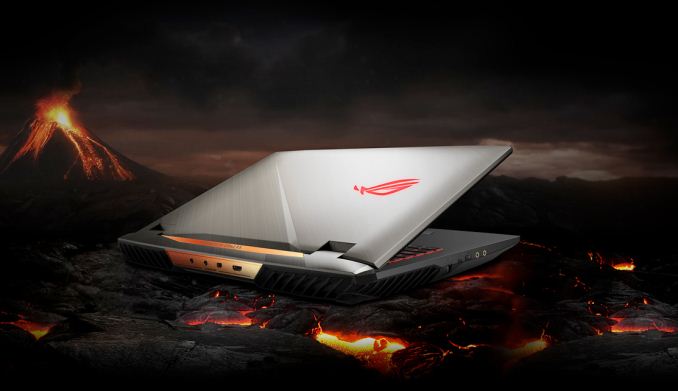 The new ASUS ROG G703GI “Chimera” is equipped with a new AHVA/IPS display panel featuring a 1920×1080 resolution, a 144 Hz refresh rate, and a 3 ms response time. By contrast, the first-gen ROG Chimera (G703VI) was outfitted with an FHD panel featuring a 144 Hz refresh rate, and a 7 ms response time. The reduction of the panel’s response time will likely make gameplay feel smoother because the LCD will react to actions faster. Besides, it will likely make fast-paced actions look sharper (everything will look and feel better provided that performance of the system is sufficient for a particular game/scene and there is enough bandwidth between the GPU and the LCD). At present, the ROG G703 GI only comes with the new 1080p144/3ms panel, but in the future ASUS may offer versions of the new ROG Chimera with different displays offering a higher resolution, for example. 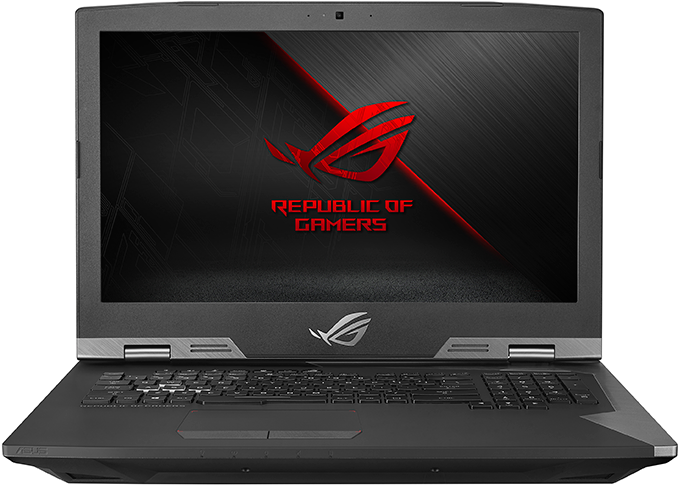 The latest ASUS ROG G703GI is based on Intel’s new six-core Core i9-8950HK or Core i7-8750H CPUs as well as 300-series PCH. The fully-unlocked Core i9 processor is factory overclocked and can run at up to 4.8 GHz in single-core burst mode (typically, it can run at 4.8 MHz only with Thermal Velocity Boost, which usually lasts for instants before the case temperature reaches 50ºC). Meanwhile, the Core i7 chip can TurboBoost itself to higher frequencies automatically when there is a TDP headroom.

To accommodate the new CPU and PCH, ASUS needed to develop a new motherboard for the ROG Chimera laptop. The new platform changes processor’s PCIe interconnect scheme to boost performance of solid-state storage sub-system. The ROG G703GI features three M.2 PCIe 3.0 x4 slots with two of them connected directly to the CPU. The architecture eliminates any potential bottlenecks that may occur when SSDs in RAID 0 mode are connected to the PCH and all the data flows to the CPU through the DMI bus (which essentially is a PCIe 3.0 x4 with a peak bandwidth of up to 3.93 GB/s). When two high-end SSDs connected to the CPU operate in RAID 0 mode (which ASUS calls HyperDrive Extreme), they can offer read speed of up to 8.7 GB/s, the manufacturer says. Obviously, the architecture leaves only eight PCIe 3.0 lanes for the graphics processor, but ASUS believes that the GPU will still get plenty of bandwidth and faster storage will ultimately bring more benefits to the end user.

Speaking of the graphics sub-system, it is still based on the NVIDIA GeForce GTX 1080 GPU that can operate at up to 1974 MHz in boost mode (up from 1733 MHz recommended by NVIDIA) and push its memory to 10.3 GT/s data transfer rate (up from 10 GT/s). Since NVIDIA has not released any new high-end GPUs since the launch of the original ROG Chimera, ASUS could not upgrade graphics of the new flagship laptop. The GPU naturally supports NVIDIA’s G-Sync dynamic refresh rate technology, which will enable a very smooth gameplay on the 144 Hz/3 ms display panel. 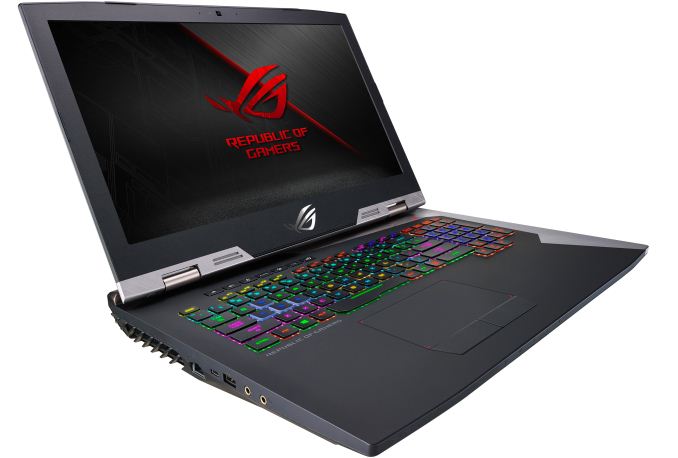 The new ASUS ROG G703GI comes in the same chassis as the ROG G703VI, so it has the same cooling system comprised of two 12 V blowers, multiple heat pipes and radiators with ultra-thin fins for maximum efficiency. The new system can support up to 64 GB of DDR4-2666 DRAM, three M.2 SSDs, and one 2.5” hybrid drive. As for connectivity, the latest ROG Chimera got Intel’s Wireless-AC 9560 CNVi 802.11ac Wave 2 Wi-Fi solution supporting up to 1.73 Gbps bandwidth, but all the other I/O capabilities remained the same as before: a GbE header, one Thunderbolt 3 port, four USB 3.0 Type-A connectors, an SD card reader, an mDP 1.4 connector, and an HDMI output. The new gaming PC is also outfitted with the same RGB-backlit keyboard as well as a powerful audio sub-system featuring four speakers, the ESS Sabre DAC and an amplifier.

The new ASUS ROG G703GI “Chimera” gaming laptops with six-core CPUs and an ultra-fast storage sub-system will be available starting from late April. ASUS did not elaborate on the pricing, but expect it to be comparable to the first-gen product, which started at around $3500. 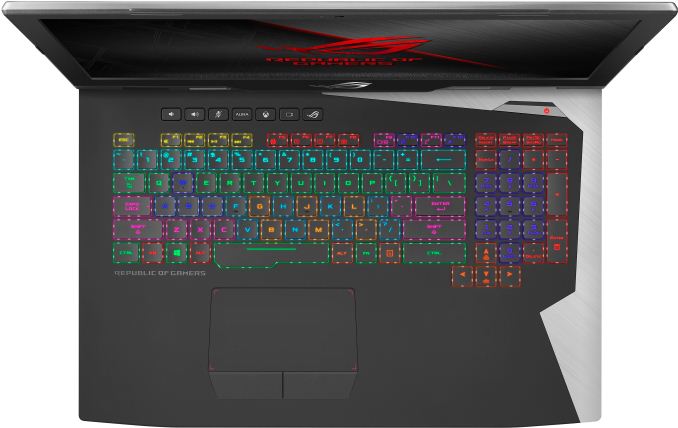