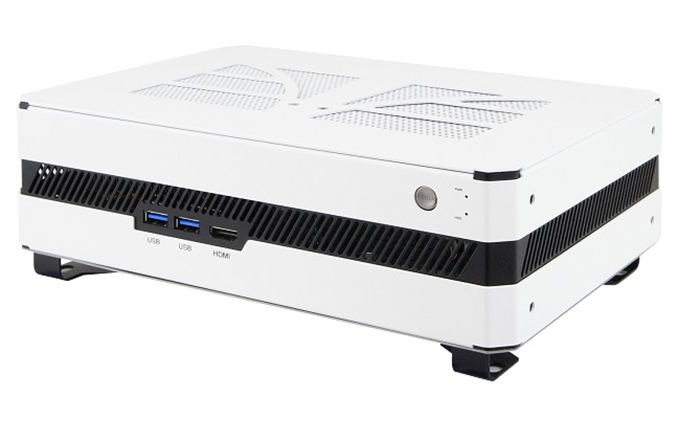 IBASE Technology, a supplier of embedded, industrial, and special-purpose PCs, this week introduced its compact desktop that uses NVIDIA GeForce graphics adapters in MXM Type-B form-factor. Officially, the SI-614 is called a digital signage player and comes with appropriate software. Meanwhile nothing can stop from using it as a gaming machine, assuming you can get one.

The SI-614 officially supports only GeForce GTX 10-series graphics cards starting from the low-cost GeForce GTX 1030 and all the way up to the high-end GeForce GTX 1080. One of the key reasons the company is launching a digital signage player with a discrete GPU is the system’s ability to drive four 4Kp60 displays or one 8Kp60 monitor. Meanwhile it looks like the limitations are conditioned IBASE’s proprietary software for remote management and the GPU cooling system.

IBASE is not the first company in the recent couple of years to use MXM cards inside desktops. ASRock has been offering its Micro-STX DeskMini systems with MXM support for well over a year now and Eurocom has been selling special MXM3-to-PCIe riser cards along with appropriate graphics adapters for SFF desktops since mid-2017.

The company will offer a standard version of its SI-610M with Intel’s Core i5-7500 CPU, NVIDIA’s GeForce GTX 1050 GPU with 4 GB DDR5, 16 GB of DDR4 memory, and a 128 GB SATA SSD. Besides, the company will ship the SI-610M system with a 270 W external power brick (featuring a four-pin connector), but without CPU and GPU. Therefore, actual system integrators will have to carefully configure their PCs in order not to exceed power budget of the SI-614. Meanwhile, being an OEM/ODM specialist, IBASE does not sell products to end users and does not list prices. Meanwhile, those who can buy from B2B channels will be able to get an SI-614 for their gaming needs.